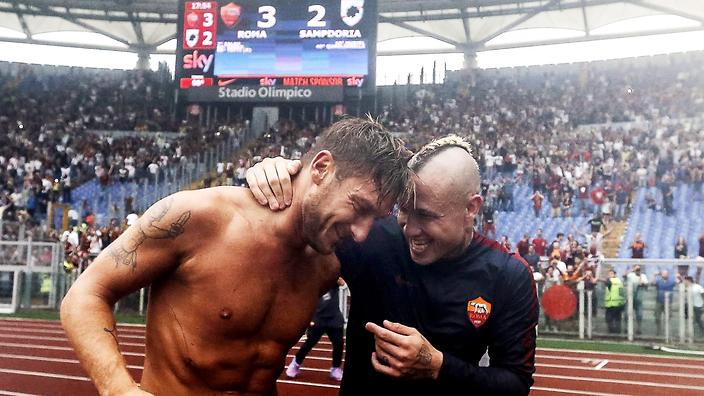 After a week without any action due to International break Serie A returned to action this weekend as Roma prepared for their 3rd match of their campaign having four points thus far this season after victory against Unidesse and Draw to Cagliari. Roma would look to rebound after their 2nd half collapse to Cagliari in their last game. It was a must win game to get back in form a loss would be unacceptable. In a very hot Day in Rome this time it would be Roma’s turn to vault a comeback after Salah scored the opening goal Roma let two goals in only to come back and win it in the 2nd half with Goal from Dzeko and a Stoppage time penalty from Roma Legend Totti vaulting them up to 2nd In Serie A.

Antione Rudiger this week would continue to train in order to get fit but was yet to be ready for a return Roma return as he would miss yet another game. Roma would play the same back four as their previous game Roma’s team remained the same was mostly unchanged in the 4-3-3 Raja would play Center Mid once again as Roma Identity of the Giallorossi offence. Up top it would remain the same for the Roman attack with Salah, El Shaarawy & Perotti making up the three headed monster up front, as Dzeko would once again come off the bench. As well as Wojciech Szczęsny remaining in his post as keeper as it seems like Roma intend on Saving Allison for later.

It was a very hot day at the Stadio Olimpico but Roma picked up right where they left off at least offensively speaking it started really well for them and after several chances early in they finally broke the deadlock in the 8th minute. Diego Perotti while inside the box drove a cross in a terrific ball into Roma teammate Mohamed Salah who put the ball past the goalkeeper with his head scoring his 2nd goal of the season and his 22 goal in his Serie A career to put Roma up in this game 1-0. It seemingly felt like it was one-way traffic but just 10 minutes later Sampdoria would equalize when Murial put a nearly unstoppable ball past Wojciech Szczęsny in the 18th minute. Despite giving up the goal Roma still seemed to be in control of the game they were winning the possession battle as well as getting more scoring chances then their opponents but like many things in life everything doesn’t always look how it seems. The Sampdoriaons would than double the lead a few minutes before the halftime break with Fabio Quagliarella with scoring on off a corner but was arguably off sides. Raja scored to potentially equalize four minutes later but it would be controversially disallowed due to an apparat offside call. Several minutes later the 1st half would end with Roma trailing 2-1. It was a cause for concern as it would be another disappointment if they failed to get 3 points from the game as Roma’s quality is far superior to their opponents. Even a draw would feel like loss it was very dangerous water that they were swimming in a draw would give them 5 points in three games which is not a good amount for that time span especially for a team like Roma. Roma would make to key sub’s going into the 2nd half with Edin Dzeko in for El Shaarawy, Stephan played pretty well but is yet to recap his form from a season ago none the less a much improved performance today. Also coming in for his 1st game of the season would be Roma Legend Francesco Totti making his 759th career appearance for the Romans he would go in for Diego Perotti who had a very good game assisting the Mohamed Salah opening goal Diego has been brilliant this season. Both substitution turned out to be game-defying moves by Roma boss Luciano Spalletti.

The 2nd half got underway the heat and humid only got worse early into the 2nd half both teams would be given a rare water break. Than they returned to action the subs would make an immediate impact but it was still very nerve racking situation still needed at least a goal to get something from the game there would be a big defense between 8th and 2nd that what was up for grabs. Roma did look in great from in the 2nd half though so I had faith that we could pull it off however anything can happen in football so there was a nerve racking aspect to it despite how well we were playing at the time. Roma’s chances continued and continued as time went on it in some ways kind felt we were running out of time we were taking great chances but we were just unable to finish them off. Than all of sudden it started pouring rain Than the moment came in the 61st minute. After receiving a pass from Bruno Totti delivered an incredible cross in from nearly 40 meters out putting the ball into a very dangerous area right in for Dzeko, he caught the ball inside the box with three defenders on him Dezko made one dribble before pulling the ball past the keeper to equalize and get Roma back in the game scoring his 2nd goal of the season. He continues to play exceptionally well. He has much improved from his Debut season in Serie A. Of course a lot of credit goes to Totti on the incredible pass getting his 59th assists in Serie A taking him #1 all time. So the feeling was a little more relaxed as I felt they could get another one and they were playing really well getting in on goal with ease it seemed it would only be a matter of time before they would score yet again. They continued to get a great position but nothing was falling despite playing very well as a team. Than in the 85th Minute Roma made their final sub of the game. It would be Manuel Itrube that would replace Raja it would be his first appearance for Roma in over a year as he played for Bourmouth on loan last season. It would turn out to be another great sub by Spalletti Roma’s chances continued than deep into injury time the tables would turn in the greatest of ways. After receiving a ball from Salah in the box Edin Dzeko was clipped by Defender Milan Skriniar he would receive a yellow card and Roma would be given a last minute penalty. In the 93rd minute who would step up but Roma Legend 39-year old Francesco Totti. He would than step up to the ball hitting it perfectly in the bottom right corner scoring the winner! He would take off his shirt and start running towards the fans as the entire place erupted! Scoring his 305th goal of his career and 249th goal in Serie A! as he helped Roma secure the three points as the Romans move up to 2nd in the table. A Terrific way to return after the Break. Next Week Roma heads on the road to Face 12th place Fiorentina, who finished 5th in last season campaign. Roma will without question go into that game as strong favorites having beaten them twice last season easily with winning 4-1 and 3-1 respectively but I think it should be a terrific match.