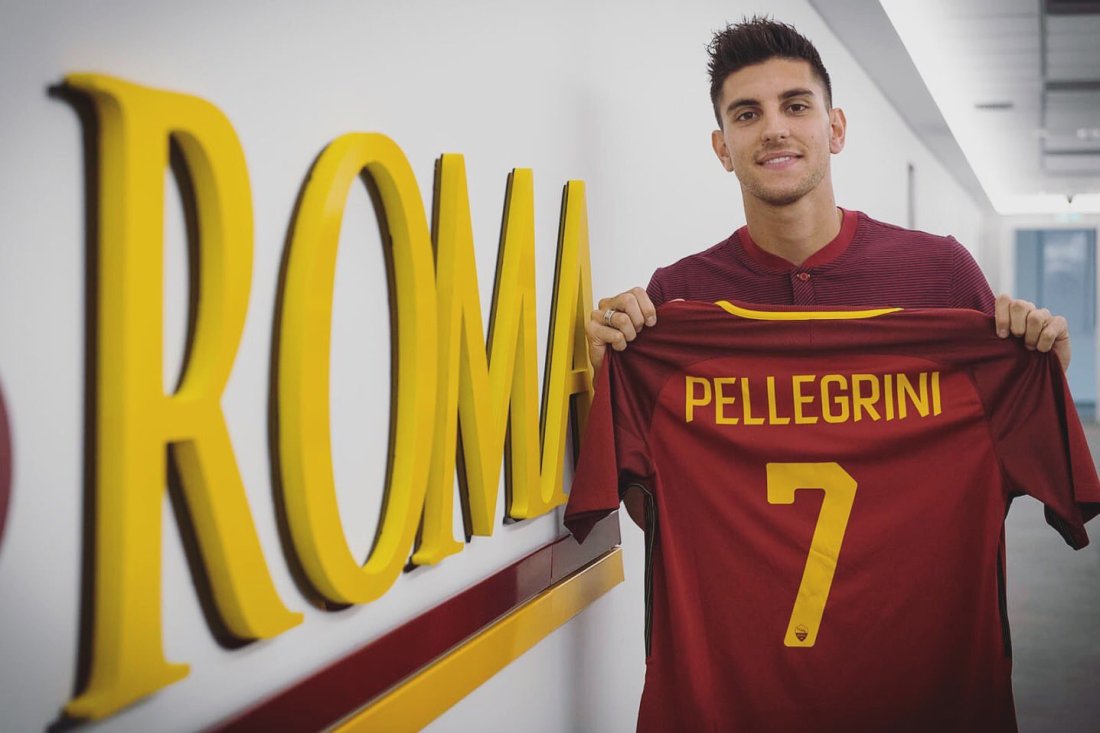 Days after Roma pulled of 19 Million Signing of Talented Dutch Right back Rick Karsdorp from Feyenoord Roma are back at it yet again pulling off some more solid business as we see a former youth player make his return to Roma. It has been known for several days now that Sassuolo midfielder Lorenzo Pellegrini would be returning to Rome where it all started for him As Roma would be activating a 10 Million buyback option to bring the Italian U-21 star back to the Stadio Olimpico. With the recent sale of Mouhamed Salah this is a massive signing for the Giallorossi Pellegrini is a young rising star that can fill the void left by Mouhamed Salah to Liverpool. He was one of the standout stars at the U-21 European championships as he led Italy to the Semi Final. A very good deal for a very good price I know I keep saying this but it’s a huge bargain for the youngster Roma would have had to pay twice as much if the buyback option wasn’t installed into his sale to Sassuolo in 2015. He is roma’s 3rd signing of the season as Monchi hasn’t wasted any time getting deals done. So far this summer Roma have brought in Mexican Center back from PSV, and as I mentioned Dutch Right back Rick Karsdorp. They have spent collectively 34 million for three players which was the amount Liverpool paid for Salah a some incredible business by Roma in the transfer market so far. After Pellegrini spent 10 years in Rome apart of their youth academy only making one senior appearance he was sent to Sassuolo to gain first team experience in a two season journey with the Neroverdi he made 55 appearances scoring 11 goals in two seasons with this recent move he will reunite with his manager from Sassuolo as Eusebio Di Francesco was recently appointed Roma’s new manager Pellegrini thrived and showed great progression under EDF. The two should be a great success together once again as Pellegrini is coming off a strong U-21 Euro’s he confirmed he would be returning several days ago. He flew directly to Rome from Poland where the tournament was being held to complete his move signing a 5-Year deal with Roma he was given the #7 shirt left by Clément Griener last season. Upon his return the 21-Year old had this to say “It is an incredible feeling to come back,” Pellegrini said. “This was my objective from the moment I went to Sassuolo. It is the culmination of a great two-year journey with them. “I want to thank Roma, including Monchi and the rest of the directors. They have always been in close contact with me. They made me realize how much they wanted me back.” I think Pellegrini will be one of the best playmakers in Serie A this season a great young player Roma’s attack just got a little stronger.

Pellegrini in his Early Years playing for Roma’s youth

A Roman from the beginning Lorenzo Pellegrini was born in Rome and grew up a Roma fan. Pellegrini joined The Giallorossi academy in 2007 he was just 9 years old when he officially joined. He spent 7 years playing for the Roma’s youth team a historical academy that brought through players such as Alexandro Florenzi, Danielle De Rossi and Francesco Totti he represented Roma in the UEFA Youth League and other competitions. Since his the very beginning he showed the promise to be a top quality player he graduated from the Roma academy and was handed his debut at just 18 years old. Coming on as a second-half substitute for Salah Uçan in a 1–0 Serie A win over Cesena on March 2nd 2015. However it would be the only appearance he would make, the club knew he would struggled to get game time the youngster was sold to Serie A side Sassuolo for 1.25 Million in the summer of 2015 it gave him to opportunity to play good minutes it wouldn’t be the end of Pellegrini and Roma. Roma had installed a buy back clause in his contract meaning that Roma could buy him back to repurchase him for 8-10 million. It was always in the plan for him to return Roma just wanted him to develop into the player he is now. So he headed off to Sassuolo his manager was recently hired Former Roma player Eusebio Di Francesco a man who really helped the youngster developed his tremendous potential. In his first season with Sassuolo would get a run of several games and developed himself as a consistent starter late in the campaign after showing his effectiveness off the bench. During his debut season in 2015-2016 Pellegrini helped lead Sassuolo to their best season in the history of the club as they would finish 6th in Serie A earning 61 points with a record of 16-13-9. In that season they would have a chance to play in Europe for the first time ever. Pellegrini would make 20 appearances scoring 3 goals the next summer Sassuolo would qualify for the Europa league the team won both qualifying games as they would get their first European experience. Their success in getting into Europe would be largely tribute to Di Francesco and his tactics but Pellegrini played a part. They would compete in Group F with Raid Wien, Athletic Bilbao and Genk however they would struggled in the Europe as they would finish bottom of their group but the fact they were even there was impressive they did manage score 9 goals and win one game but they finished with just 7 points. The following year Pellegrini would get an increased role as he would play a much bigger part in the team than the season before. Before not too long he would become one of the team’s best players the attack of Pellegrini Defrel and Berardi would be lethal at times but it didn’t insure good results last season Sassuolo finished 12th in Serie A with 46 points. Pellegrini made 33 appearances in that second season. At 21 he became the youngest player to have a hand in 10 goals in a Season. He registered 8 goals and 6 assists last season as he continued to consolidate himself as one of the best young talents in Italy. Late last season he would be rewarded for a stellar season as he would be called up by the Italy National team He made his debut in a unofficial friendly against San Marino. He would come on as a half time sub replacing Torino’s Daniele Baselli in what would be an 8-0 win. However he would make his official debut a in a 5–0 home win over Liechtenstein in a 2018 World Cup qualifier. After the season Pellegrini was picked for the U-21 European championships In Poland. He went viral after the opening match when he scored a bicycle kick against Denmark in what would be the first goal of the tournament Italy would go on to make the Semi Finals with Pellegrini being one of the standout stars. Shortly after he was confirmed that he would be returning to Rome it looks like Roma have got their hands on a star it was a good two year experience for him at Sassuolo but he is now ready for the big time.

The Arrival and the Return of the Roma youngster couldn’t have come at a better time. Earlier this mouth Roma sold Mouhamed Salah to Liverpool as the Egyptian got his dream return to the Premier league despite Roma getting a good profit out of the deal it leaves a gap in the Roman attack that scored 123 goals in all competitions a season ago in their 2nd place finish. Despite missing a mouth at the African Cup of Nations Salah was one of the best players in the league the former Roma winger had 19 goals and 14 assists in total accounting for 20 plus goals. It was never going to an easy void to fill however The Addition of Lorenzo Pellegrini in his return to his childhood club couldn’t have come at a better time. Only costing 10 million to repurchase is a massive discount of what he is worth he is probably worth 15-25 million euros. Mouhamed Salah was a winger for roma Pellegrini is also a winger. Pellegrini isn’t at the level of Salah quite yet but he is capable of filling the void as he is on the right path and could potentially recap what Salah did for Roma in his 2 seasons in Serie A. Pellegrini is a gifted scorer and has the great passing ability just like Salah. Roma will need more reinforcements but given the fact that Pellegrini could fill that void and he only cost 10 million he will be a massive player for roma this season I think he will score at least 15 goals this seasons he has that goal scoring ability to be an alternative scoring option Pellegrini and Dzeko can do big things together this season. The ability he has to put himself in a threating position is second to none he knows where he needs to be at all times moves very well without the ball getting into space in the opponents dangerous area. He has improved in a lot ways he has room for improvement but he has a big upside drastically improved his vison last season and has developed into a great passer he is excellent with through balls. The game changer here is he has already played under Eusebio Di Francesco for two seasons he has played in his system and formations. Given the fact they have already worked together he knows how to operate in his tactics and strategy they have worked really well together in the past he should only improve in Rome the two of them have chemistry. He also is surprisingly quick for his size has very good pace a very attacking minded player. One of the his best quality’s is the medium-long range ball he uses them break down the defense and allowing scoring chances for everyone around him. In Eusebio De Francesco 4-3-3 he will likely play either on the wing or the center. This gives Roma depth in the attacking midfielder that features Stephen El Shaarawy, Diego Perotti and Raja Nainggolan. This signing gives Roma youth adding young talent will only make this a more dangerous team in the future. Roma expected to Add Lyon captain Maxime Gonalons as the announcement will come later this week he will likely fill the departed role left by Leoandro Paredes who is off to Zenit. Roma also continue to try to bring Kasper Dolberg to Roma from Ajax as well as using to EDF connection to bring in Berardi as well. This is a very good signing for Roma he’s young and has the potential to be a top player in this league as Lorenzo Pellegrini retunes WELCOME HOME