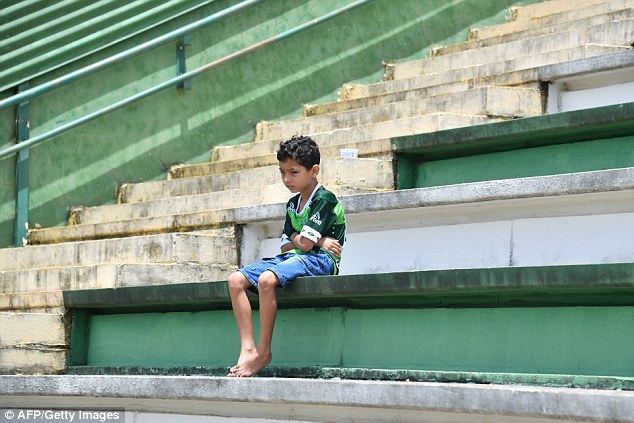 – Medellin, Colombia
Brazil’s Cinderella story Chapecoense boarded flight LAMIA Flight 2933 to Columbia On their way to Copa Sudamericana Final Players, coaches and Journalists were heading the Columbia to cover the feel good story of the season in South America they were being called the Brazilian Leicester have climbed to from the bottom to the top of Brazilian football in 7 seasons. 7 years ago, they were all the way in Serie D the 4th division of Brazilian football went on a magical underdog run that saw them get many promotions on their way to reaching the top division in Brazil. They continued their run this season in the South American cup final Brazil’s Leicester had that magic in their team that the Foxes had last year on their way to their unlikely title they had the same magic and belief in their hearts it was one of the story lines of the season but unlike Leicester in ended before they could lift the trophy. After their semifinal victory over Argentina Side San Lorenzo they were seen celebrating in the locker room after the match they would head to Columbia to face Atlético Nacional in the 1st leg of the final the entire city felt the excitement as they saw their hero’s out last the odds and achieve the greatness that was building. Unfortunately they never made it to Columbia they never got to lift the trophy they didn’t even get to play in the match…..

Many player’s coaches and many reporters where exited to play in and cover this incredible story they’re didn’t get the fairytale ending we all wanted. Chapecoense football team would hit great tragedy as Brail would lose many of their countrymen and hero’s as the plane crashed its 77 passengers into the side of a mountain leaving 71 of them dead while only 6 confirmed survivors as well as the players on loan and the three players that didn’t board the plan due to injuries and suspensions. A devastating moment for everyone around the world as a football team and city lost most their men to disaster. An investigation will be launched as they try to determine what exactly brought the plane down they plan to look at flight records recovered from flight 2933 that killed 71 people on Monday night. On Wednesday, a ceremony was held for the remembrance of the victims at the Atanasio Girardot Stadium in Medellin, Colombia, where Brazil’s Leicester City, Chapecoense football team were scheduled to play the 1st leg of the final against Columbia’s Atletico Nacional. “Tomorrow in a symbol of solidarity, we will head to the stadium at 6:45 p wearing white and with candles for the victims,” the Medellin mayor’s office said in a Twitter post. Other than the players and coaches as I mentioned several journalists also died in the crash who boarded the plane to cover the remarkable story of the Brazilians who rose through the ranks of Brazilian football in the past several years to become unlikely champions Brazilian football has a very Passionate fan base for all their clubs and their national team after the attack thousands of thousands of heartbroken fans gathered at Arena Conda in the team’s hometown of Chapeco, Brazil, to mourn their loss of their gone but not forgotten hero’s they will be missed not as footballers but as Fathers as Sons as people in one of the most depressing disasters in sports history.

It has touched many many people in the process they expressed a moment of silence in Liverpool vs Leeds game yesterday as well as the Man United West Ham and Southampton Arsenal game as well as many to come this weekend. They recovered kind messages from nearly every country and source with the exception of the united states I know it’s not a football country but it’s not excuse for not giving there respect to a horrific disaster I’m sorry to say this Americans don’t care about tragedies that aren’t in their own country it just seems that way I’ve only heard very few people in the States speak about it or show respect or sadness about the events so next time something horrible in the USA happens and I don’t give a shit you will know why disgusting behavior by them very disappointed they might not be American lives but they are still lives. The disaster especially touched Real Madrid and Portugal star Cristiano Ronaldo who reportedly plans to donate 5 Million dollars to the families of the victims and the club. There would be opponents Atlético Nacional have requested that CONMEBOL award the title to Chapecoense regardless. They also will be Added into FIFA 17 Under REST OF THE WORLD clubs in remembrance of the men that played for the club.

After the tragic events this week in Brazil it reminds us of other similar tragic events in the past. Two similar disasters come to mind Torino’s Superga air disaster in 1949 Shortly after winning the Serie A title earlier in the season. 31 men lost their lives that day on May 4th 1949 Avio Linee Italiane Fiat G.212CP was taking the team home after playing a Friendly match in Lisbon against S.L Benfica. In the disaster the entire Torino team (A large Portion of the ITLAY’s National Team) lost their lives as well as the coaching staff and three well-known Italian sports journalists: Renato Casalbore (founder of Tuttosport); Renato Tosatti (the Gazzetta del Popolo, father of Giorgio Tosatti), and Luigi Cavallero (La Stampa). Vittorio Pozzo, was assigned to identify the bodies he was the Italian Manager at the time he recently called up most of the Torino team who had one of the best teams in Europe at the time. The only members of the team that didn’t make the trip were left back Sauro Tomà, due to an injured meniscus reserve goalkeeper, Renato Gandolfi also missed the trip. Controlled flight into terrain due to low visibility caused the crash. They would rally and somehow remarkably finished 6th the next season but still was a very painful tragedy they lost every player on their team. The Crash stopped a dynasty as they wouldn’t see glory again until the late 70’s. This most recent one also reminds me of the Man Untied Air Munich Disaster. Shortly after the European Cup had been a stablished Champions Man United were denied by The Football League Secretary Alan Hardaker much like Chelsea were denied the season before. But Man, United became the 1st English team to compete in Europe when they defied when Man United and the help of Football Chairmen Stanley Rous but when they approached the Quarterfinal against Red Star Belgrade there was schedule conflict if they didn’t return in England in time they would receive a point deduction. So, Man United got their own plane to try to play the match and get back in time. On their way back there take off from Belgrade was delayed due to someone losing their passport the plan would land in Munich to re fill their tank, due to weather the engine sounded odd they failed to launch after several attempts they would return to the airport for 30 minutes than they returned to try again. Than finally when they went down then run way than when they finally took off the plane skidded off the end of the runway, crashed into the fence surrounding the airport crashing and killing 20 people while three others died in the hospital. The disaster caused one of the most promising Clubs to fade they wanted to shut down the club but they fought to keep it to honor their fallen hero’s Manchester United would come back in a big way becoming on of the biggest and most successful clubs in world football. All three of these tragedies can be strung together with everyone who has lost their lives they are all together now RIP and moment of silence for all the players lost. The club has been damaged but Chapecoense needs to fight for their club! They will come back this is not the last time we will hear about this team.

This has deeply affected me personally I wasn’t alive in 1949 or in 1958 when Man United and Torino had their tragedies I’m alive for this one this is more painful for me than 9/11 Terrorist attacks I grew up a football fan since I was a young child so to hear about a football team losing lives affects me in a more intense way about it I really hope they can rally and turn this around I have a hard time accepting that this actually happened but Football does something that other sports don’t they bring people together we will continue to see the sport show them the respect they deserve The Disaster In Brazil Has touched me Emotionally In Way that I haven’t felt In a Long time if Ever It Truly Broke My Heart and It Offended me that A lot of People didn’t seem to care….. Rest in Peace to Everyone that Lost their lives! We May Support Different Clubs we may be from different countries but together during this tragedy we must stand as one!