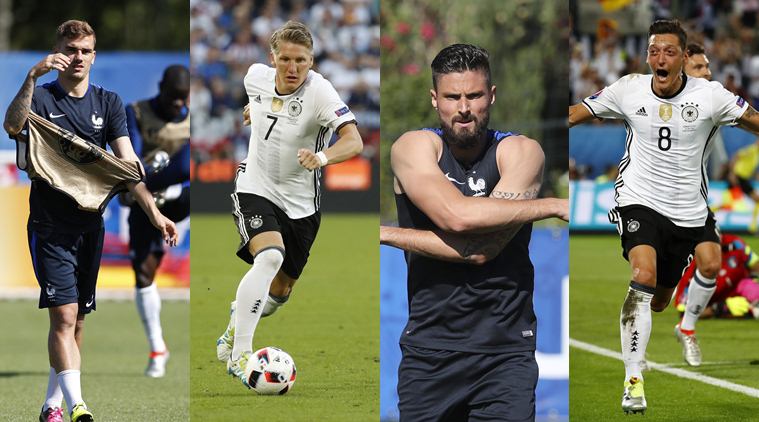 In this semifinal we see Cristiano Ronaldo and favored Portugal take on the unlikely semifinalists Romania and their stone wall defense. It becomes David verses Goliath match up the surprise Package of the tournament against a European superpower with one of the world’s best players the scoring machine that is Cristiano Ronaldo the Real Madrid star has hit 50 goals in Six straight season. He is the most dangerous scorer in European football. With a team with players playing in top leagues in Europe. Even Portuguese clubs are very strong S.L Benfica even made the champions league quarterfinals. Portugal is a team filled with youth talent and many exiting prospects. The Portuguese Powerhouse find themselves against a Romanian team with no major stars with very few players in the team are playing in top notch leagues. The Majority of them come from the Romanian 1st division as well as many others playing in Bulgaria, Turkey and countries like that. However, the Romanian defense has proven to be one of the best backlines in Europe that have the ability to counter what Portugal can do offensively. Portugal are the better a much stronger side but the defensive prowess that is Romania it will be no walk in the park for Ronaldo and company. It will be a very close game that I think could take extra time to decide a winner. Portugal have a very strong midfield that can break down any defense with Ronaldo in front being the driving force of the Portuguese attack their strengthened team from years of the past has made them a threat they are in in great from any create major problems for the opposition. Romanian is not a great offensive team which will play into Portugal’s favor not to mention they have the most dangerous player in Europe Cristiano Ronaldo regarded by many as the world’s best player. He is pegged as an assassin he is a game changer and a will be a major factor in this game. He is the type of player that can score at any moment dangerous in all areas of the game he has the ability to single handedly take over games and come up big in the important moments even though we haven’t seen it on the international level as much as at club level but non the less he is capable of putting in those performances and I believe we will see a very effective Ronaldo. I still believe Romania can challenge the danger that Portugal presents. But the Romania defense has remained the same their defense completely neutralizes the opposition having the ability to take high powered offences out the game. They won’t be able to completely shut down Portugal but they will be able to slow down their powerful attack. Their drawback is the Romanians tend to struggle once they concede the key for them is do remain confident when their backs are against the wall. They have the ability to comeback in games but it’s not something they are particularly good at. However, they have players that are proven scorers. Stanciu is a very special player he is class a very young and talented player that is a very important for Romania’s success he is the guy that can deliver a key goal in this game. Florin Andone is also a capable scorer they don’t have a lot of scoring options its mostly those two but that could be enough to keep on par with Portugal it will be a very close game. I think Portugal win this game but it won’t be easy it will need extra time in I believe Stanciu will find the back of the net but In the end Cristiano Ronaldo and Portugal has too much quality and will be too much for Romania to handle as the surprise package will crash out after their best tournament run in Romania football history as they open the eyes of many as the proved they belong and are on the verge of becoming a European power. As Ronaldo and Portugal advance to the Euro Final 1st appreance since 2004.

The much anticipated Semi Finals the Hosts take On the World Champions
Its France and Germany the gut punching loss to the Germans in the quterfinals of the World Cup still in the back of the minds of the French. The stage has been set to get Revenge on the team that sent them out of the world Cup these teams don’t like each other very much I remember being in Germany during the 2006 world Cup in which France lost the Final to Italy moments after Italy triumphed in Munich where I was at the time they were sirens going off all over the city celebrating the failure that the French national team. Both teams have significant absentees with Germans Best player Marco Reus missing who was left off the squad due to injury and French striker Karim Benzema was controversially left off the squad as well. Despite those two missing both team are tremendously talented sides with a lot of players that have real quality. Germany are the world champions have been through this before in addition to winning the last world cup they were semifinalist in Euro 2008 this is a team capable of beating anyone this German team has aged but still to this day are still one of the best teams in the world led by the Majestic Mesut Ozil who is the catalyst to the German attack against the Hosts a French team that returned as a European superpower a team with youth to take them the distance. Despite Benzema’s absence the French have two of the top 10 players in the world, in Antione Griezmann and Paul Pogba two among many young stars the French have. It is two European Superpowers going head to head in the with the entire world watching could the hosts take out the world champions? Or would the Germans show everyone that they are still the best in the world. Both teams are very similar both great attacking teams that can cause havoc on any team they face. Both with a very strong defense as well as world class keepers it really is difficult to see who really have the advantage. The 3 Headed monster of Oliver Giroud, Antione Griezmann & Anthony Martial Gives French a slight advantage up front but Germany’s Thomas Muller has an impeccable scoring record for Germany this game will be a back and forth battle for 120 minutes’ extra time will be needed these teams are to close in comparison. But given the fact that France are a younger team that has proven players and are hosting the tournament I give them the slight advantage. It will be a high scoring affair I think that France comes out on top in a 7 goal shoot out with France taking it in extra time winning it 4-3 knocking out the world Champions as revenge for 2014 will be served as the Hosts do the impossible and head for the Euro 2016 Final.
Score: 4 France vs Germany 3