Cristiano Ronaldo and Leo Messi has dominated this sport like no other over the last decade but has Neymar overtaken them? as the heir to their throne. I think he has and this season he has shown that he can run the show outside of the Shadow of the Great Leo Messi. I often am person of an unpopular opinion I’m well aware that people will disagree with me on this point of view but that’s perfectly fine this is just what I feel hopefully some of you will understand it. Before we even get into why Neymar has overtaken Leo Messi and Cristiano Ronaldo lets just take a moment to recognize the greatness of these two men. Messi and Ronaldo are apart of the most dominant time period in sports history. Yes I mean sports history not even Michael Jordon or Tom Brady have dominated a sport like these two men. We wouldn’t be doing them justice if we talk about just how dominate they have been over the last 10 years. We are talking about two players who made the Ballon D’or a boring award. It used to be an award that anyone could of won from the beginning of the year now its become a battle between two men. Both of these legends have 5 Ballon D’or’s each given absolutely no chance for anyone else to even be considered between these footballing machines. Since 2008 no other player has won it with Ronaldo and Messi dominating this award as well as practically any award judging on individually excellence. Its not only what they have won individually but they have led their teams to greatness on numerous occasions. Either Barcelona or Real Madrid has won the champions league 7 out of the last 10 years. With Messi and Ronaldo playing a massive role in at least one final Ronaldo vs Juventus in 2017 and Messi against Man united 2009. They both have played massive important roles in getting their clubs to heights that Real Madrid and Barcelona have reached over the past 10 years. Their has been 10 league titles won between the two of them they are the top two scorers in Champions league history they are Aliens they have done everything and the things they do make you question reality. Every season 50+ goals 20+ assists for years that is unheard of in any sport this level of dominance will never be repeated in history 600 plus goals and over 200 assists each they have won a combine 53 trophies in their career as well as 1,231 goals not to mention 212 European goals. Ronaldo despite back to back Champions league and Ballon D’ors is starting to show his age while Messi hasn’t slowed quite yet but Neymar’s greatness has finally caught up with them or on the brink of it. Just because I feel this way does not mean I don’t love the greatness I’ve seen Leo Messi and Cristiano Ronaldo perfoam at this level for my entire life they  are two of the top 3 greatest players of all time and you can make a case for them being the best ever but their comes a time where a new KING is crowned.

Neymar has been in this discussion for several years now and even before that the potential was surely there. Before he even put a foot in Europe he had sored 136 goals for club and 20 for his country. He was proving to be one of the best talents in world football before he even hit Europe. Neymar transferred to Barcelona in 2013 for 57 Million he would star in the 2013 Confederation Cup as the then youngster was named player of the tournament as Brazil took home the trophy. In Barcelona he got to learn under the greatest player of this generation in Leo Messi. Neymar’s first big season in one of Europe’s elite clubs was underwhelming he learned from that experience learning a lot of valuable lessons from Messi and La Liga. He still managed 15 goals 4 Champions league goals Messi was still Messi but Barca couldn’t reach the heights of what they were capable of as Atletico Madrid took the league were knocked out by a Cristiano Ronaldo absence Real Madrid in the Copa Del Rey and were taken out by Atletico Madrid in the champions league as they had to watch both Madrid clubs battle it out in the Champions Final with Ronaldo’s Real winning it. A disappointing season for Neymar but the youngster would turn his fortunes as the following season the world would see a different Neymar. The Next season Barca splashed the cash for Liverpool’s Bully Luiz Suarez who recently got banned from International football for a year after he bit Giorgio Chiellini in a world cup match against Italy his 3rd time being punished for this offence. Barcelona paid 83 million for the bad boy at the time it was one of the most expensive transfers in football history. This signing created the most lethal attack in football history Messi, Neymar and Suarez created MSN. That Barcelona team was on of the best teams in history as they won everything over all their competitions this Barcelona team scored 180 goals winning the league champions league and Cup pulling off an historic treble. MSN combined for 121 goals throughout the season they were just unbeatable. Neymar proved his potential he scored 39 goals was joined top scorer in champions league on par with Messi and Ronaldo. He also was Bacra’s most important player during crucial moments as he scored in the quarterfinals,Semi Finals and Final of the champions league. This is when he truly entered the debate for the best player in the world as he was considered by many as the 3rd best after Messi and Ronaldo. He made the 3 nominees for the Ballon D’or as he saw Messi win it but it was clear he was close. The next season Barca took the league again as well as the Copa Del Rey. MSN broke 100 goals scoring 131 between them in another trophy fueled season. Neymar went for 31 goals proving he still belongs is the conversation for the best in the world. Neymar Leo Messi and Luiz Suarez showed why they are the greatest attack in football history. Neymar’s last season was one to remember but also one to forget his goal scoring dropped out quite drastically as he struggled to find the net but his quality was still the same. Suarez also scored a lot less goals but together they still managed to break 100 goals once again bagging 111 goals between them. It was a different Barcelona team they weren’t as strong as they were in the previous two seasons it was appearing like the end of an era. Real Madrid took the league but only just as it took a massive fight off from Barca. Barca won the Copa Del Rey Once again but the most amazing part of their season came in the champions league. Barca went 4-0 down to PSG in Paris in the Round of 16 needing a minume of four goals to keep them alive. Despite some questionable decisions Barca pulled off the ultimate upset coming back from 4-0 down to beat Paris 6-1 with a last minute goal. Neymar brought them back from the dead in what was his finest moment of his football career without him they would of lost without question. Barca went out in the next round the Juventus 3-0 with Neymar leaving in tears. Neymar scored 20 goals and was the top assist man in the champions league but after 105 goals in four years along with 9 trophies Neymar felt it was time to get out of Messi’s shadow to start making his own history.

Paris Saint Germain: Getting out of Messi’s Shadow to become the Worlds Best Player 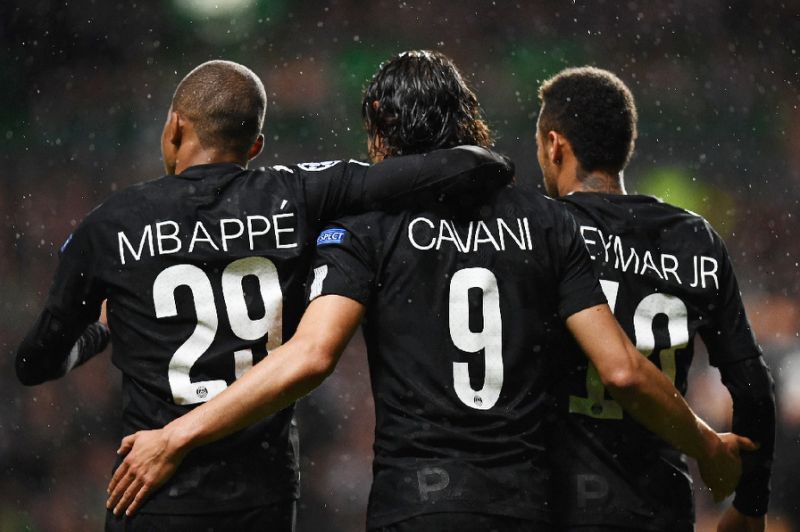 Last Summer Paris Saint Germain came in for Neymar to smash the world record transfer. PSG agreed to pay Neymar’s 222 Million Release Clause to bring Neymar to Paris to become the World’s Most expensive player in football history surpassing Paul Pogba’s transfer to Man United last season for 105 Million. PSG’s Qatar billionaire forking out the cash to bring one of the world’s best footballers to Paris as he attempts to build a dynasty in Paris. Neymar signed a 5-Year deal taking the #10 Shirt that was given to him by Javier Pastore as a welcome gift this shirt was also previously worn by the clubs second leading scorer Zlatan Ibrahimović. Neymar joined up with PSG Superstar Edinson Cavani and PSG brought in the best youngster in football Kylian Mbappe. To create MCN a equally strong strike force he had in Spain and you could argue this PSG trio will be better. The three of them have allready scored 65 goals this season they will get well over 100 this season between them. Neymar despite having some issues with Cavani early in the season everything seems sorted as high flying Paris are the best team in the world with nothing to stop them but themselves. Neymar has proven that he can be the guy he has delivered on his move he is now the best player in the world I do believe he has finally been crowned while many will disagree with that. The belief of many is that Messi still is number one in the world Messi is a world class player and one of the best in history but I truly feel he has been passed up by his protégé. Neymar has 24 goals and 17 assists this season he is the catalyst  of the Paris attack both scoring and facilitating for his teammates his link up play with both Mbappe and Cavani has been tremendous their fluidity is just on a another level. Cavani has been PSG’s #1 scoring option and rightly so as he recently became the clubs all time leading scoring his 156th goal for the club passing Zlatan’s record. Neymar has accepted his role and has proven to be an all around world class player not only has he dominated in the league but has shown is greatness in the champions league as well both scoring the goals and finding teammates. He is the best player in the world there will be people that will disagree with me and I know exactly what they would say. They would argue that it is the French league which is a fair point its a league that PSG just rip apart its not an elite league. However in the Champions league he has shown he is a world class player he had an infectious performance against Bayern. We allready know Neymar is world class he has allready proven that having played in Spain he has scored in the EL Classicio, Champions League final, World Cup, Copa America, Olympics and many massive games. At 25 years old he has scored 53 goals for Brazil he will be Brazil’s all-time leading scorer with in the next few years he just need a little over 20 goals to catch Pele’s record. He is a big part of why Brazil are one of the favorites to win the world cup in the Summer. This PSG team will give Real Madrid nightmares and Neymar is a big part of why the Champions league holders will get sent home early. You can say what you want about Neymar is special  just watch what he does on a football pitch from what you see he is just world class. Three years ago I said that he would be the best player in the world with in three years I believe he now is.