The January transfer window has finally closed in what has been a very hectic month for the Italian Giants. As Roma has had non-stop speculation regarding players leaving and players coming before I get into that Monchi Roma sporting director pulled off a late move just as the window was starting to come to a close. Roma and Sporting Lisbon agreed to a loan with a 5.7 million obligation to buy regarding left back Jonathan Silva in which Roma will activate at the end of the season. This move comes hours after it had looked like Roma had agreed with a deal for Manchester United Wing back Daley Blind who had given the green light on the move but that was shortly ended by Jose Mourinho who did not have a desire to sell any players during the transfer window. Monchi was able to squeeze this deal off as the 23 year old arrived in Rome this morning to complete his medical to officially join a Roma team that has had some defensive issues over the last few weeks it surely is a great addition to the squad. This transfer window for Roma has included a lot of rumors of potential exits of many of their Stars. Roma have come out of this only having to sell one player as Emerson made his move to Chelsea last night on a 20 million deal. Early in the transfer window it was alleged that Kevin Strootmon was off to Liverpool and that Radja Nainggolan was ready to leave for China. The Strootmon deal never materialized and Nainggolan rejected a 13 + million a year deal to go to China. The biggest rumor that nearly came true was a deal for Edin Dzeko to return to the Premier League to join Chelsea. In what was expected to be a double swoop with Emerson and Dzeko with Roma receiving about 70 million for both deals combined. However negotiations hit a roadblock when Edin Dzeko wanted a two-year deal rather than the 18th month deal that was offered to him. Further negotiations we’re being made up until Roma’s record signing Patrik Schick who would have been the guy to replace Dzeko in the striker position picked up an unfortunate injury. This caused the deal to collapse Dzeko was Serie Oz top scorer last season but has failed to find the net with the same consistency this season. Di Francesco and Monchi admitted in today’s press conference that they were very happy to hold on to the Bosnian. This was a transfer window that could have gone very bad Roma are very happy to be able to hang on to a lot of their key players. In addition to that as Roma are delighted for the arrival of Jonathan Silva who passed his medical this afternoon and officially join the club being handed the number 33 shirt. Upon joining he called joining Roma an Indescribable feeling in his opening interview. This winter transfer window turned out to be a rather good one.

Getting to know Jonathan Silva:

Jonathan Silva started his career in his homeland of Argentina in the youth setup of Estudiantes. He made his debut in the first team at 17 years old in the 2011-2012 season. His participation in the first team however was very limited as he was still a young kid he only made three appearances for the Argentine side That season. Estudiantes had an underwhelming year as they finished 14th with just 23 points in 19 games. In the 2012/2013 season Silva played a slightly increase role in the team as he was getting proper first team football in his second season he made 16 appearances getting a little more first-team Football under his belt. In a slightly improved season as Estudiantes finished eighth in the league with 28 points. In what would be his final season with Estudiantes he was a regular first-team starter playing in 38 games at left-back the potential was starting to show. Estudiantes finished ninth in the 2013-2014 season and what would be his farewell in Argentina football. He finished his career at Estudiantes with 54 appearances in 3 Seasons. In the summer of 2014 he would leave Argentina to join Sporting Lisbon in Portugal on a 3.2 million deal. In the 2014-2015 season in the Portuguese Super league he did quite well. He made 20 appearances for sporting across all competitions scoring two goals. Sporting did very well that season finishing third in the league with 76 points I wouldn’t say Silva was a massive part of that but he made an impact in their success. Sporting Lisbon won the Taça de Portugal that’s season beating Braga in penalties. It would be the first piece of silverware of his career. Prior to the 2015-2016 season sporting beats their Rivals and defending Champions Benfica 1-0 in the Supertaça Cândido de Oliveira final. During the next season Silva had little to no impact as he only appeared in 10 games throughout the entire season. In 2016 he returned home to Argentina as he was loaned to Boca Juniors. During that first season with Boca Juniors he made 23 appearances scoring one goal individually but as a team they weren’t the best as they finished 10th That season. The loan was continued last season as he made 13 appearances scoring one goal before his loan was ended and he returned to Portugal. back in Argentina was where he truly started to stand out unfortunately Boca Juniors went on to win the title that season but because he was only there half the season he didn’t receive a winners medal. This season back with sporting Lisbon he’s played 13 games this season including 4 of 6 Champions League games including a match against Juventus. He ended his career at Sporting Lisbon with 23 appearances and one goal as he now makes his move to Italy. 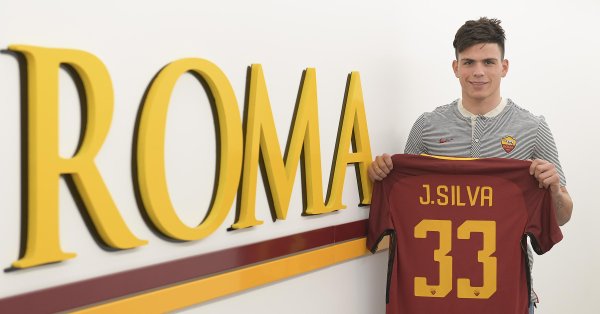 A very excited and enthusiastic Jonathan Silva comes to Rome to help make an impact on the Roman defense that has struggled as of late. Silva is coming off an knee injury that he suffered earlier this season but despite that he is almost nearly recovered and we’ll be able to train immediately. In addition to that he’s likely to be able to play very shortly I would still say its unlikely he dresses against Hellas Verona on Sunday but he will be available very shortly. According to doctors he will be fully fit by February 5th. He is a versatile left back who will likely come in for cover on Kolarov. This might be a bit of a stretch but he kind of reminds me of a combination of Florenzi and Kolarov. As well as a left-back he can be deployed as a left midfielder much like Florenzi who can do that from time to time. Much like Kolarov their strengths are very similar at only 23 years old Silva is very capable a filling in at that spot when his Serbian counterpart starts to show age or gets a bit tired. Silva is an excellent passer got good strength under him to deliver service on the cross for the Roma Strikers. He’s very good at holding the ball and excellent at set pieces a very dangerous threat in those areas. He plays with excellent passing precision and likes quick short passing to create scoring opportunities for his team. This is a very underrated deal and here’s why. Roma’s defense for the first 10 games of the season was excellent best in the league by a country mile. Not only has they’re scoring dipped but their defense has too. I wouldn’t say they’ve been poor but they have not been strong enough to hold on to certain leads the defense a lot of times has been relying on Alisson to make great saves far too often. Fortunately Roma can do that sometimes because he’s a world-class keeper but as a unit you don’t want to have to rely on the goalkeeper. With Silva in it gives Roma another option in that area Di Francesco can use him in several areas where he can be effective. His skill set goes in perfectly with how the defense play he’s very similar to some of them. Currently Roma have a Bruno Peres and Juan Jesus as backup options. Silva fits the bill for what Roman need at the moment. A Young, Pacey and intelligent player with time on his side I can see him being a massive player for this team going forward and if he is utilized in the right way this could be a massive steel at 5.7 million.

New Roma signing Jonathan Silva has pledged to give everything he has to the club, after completing his move on Wednesday.
Welcome to Roma Jonathan – how does it feel to arrive in the capital?
“I am very happy to be here, for me it is really incredible. The training ground has a great infrastructure and for me it is a great pleasure to be in this city and in a country as beautiful as this. I am pleased to be here and share this with all of you.”
You had an issue with your knee this season: how are you now?
“I’m pretty good, in a little bit I will be able to train with the squad. I’m pleased and motivated to be here – it’s another great spur to make sure my return to the pitch comes as soon as possible.”

What did you learn about Italian football when you played Juventus in the Champions League?
“It’s a tactical game, played with a lot of spirit and toughness: the smallest error can cost you dearly. You need to always play with the utmost concentration, with a lot of dedication and commitment.”

What are your personal aims?
“I want to make my contribution among this great group of players, and be available to this great club. I want to do my best for Roma.”

What made you decide to choose Roma?
“As soon as I learned of Roma’s interest from my agent I did not hesitate: I felt an indescribable happiness that any player would like to experience.”