In what surely would be one of the most anticipated matches of the campaign. We get to the business portion of this competition a World Cup quarter-final between Messi’s Argentina and Spain. On paper Spain is the much more complete team and we have been seeing them play at such a high level coming into the tournament. They are a complete team with quality throughout the squad some of which who have had success in these big games. While Argentina do have the talent a lot of the time it has been Messi or bust. If Messi wasn’t on Argentina Spain win this easily but because he is and this may be his last chance at the World Cup Messi in Argentina will do everything they can to stop the finely-tuned machine that is the Spanish national team. Although it is hard to say if Argentina quality that they had can finally gel together as a team. However Argentina struggles to qualify into the competition to begin with is cause for concern as Spain ripped through qualifying as if it was nothing. On a stage like this this is made for the Spanish national team to thrive Leo Messi if he can put a heroic performance in could lead Argentina past Spain. But I feel like it’s a little too much to ask of Messi especially with their strong defense and their world-class goalkeeper it will be harder to break through then in previous years. Messi will score in this game but I believe Spain will just be a little too much for the great Leo Messi to handle as Spain heads to the semifinal.
Score: Spain 3 Argentina 1

One of the World Cup favorites against the unlikely underdogs in a clash between France and Egypt. Egypt’s hopes dreams aspirations of making a World Cup semi final rests solely on the shoulders of Muhammad Salah. While France have depth from top to bottom and all honesty Mohamed Salah will have to be at his very best for Egypt to even stand a chance in this match it’s amazing for them to get get this far but it looks like a job not even a king of Egypt can finish off. France has capable scores from every angle have the youth Off the Bench as options that can create even more problems not to mention the defensive Midfield Stonewall of Paul Pogba and Ngolo Kante. This will be incredibly difficult to crack because not only can they play the defensive role but they can get their team forward as well and Egypt catch Griezmann on his day it’s just going to be even more trouble. Egypt or under-sized and underutilized at positioning to compete with this France team. Mohamed Salah will do everything in his power but I do not believe it will be enough I think it will be too difficult for Egypt to crack the strong this strong France team. Even if Egypt manage to score France have the Firepower to respond without any problem they have quality from every angle and if Griezmann is at his very best and it will simply be too much as France Coast to the semifinal with a shout out win.
Score: France 2 Egypt 0 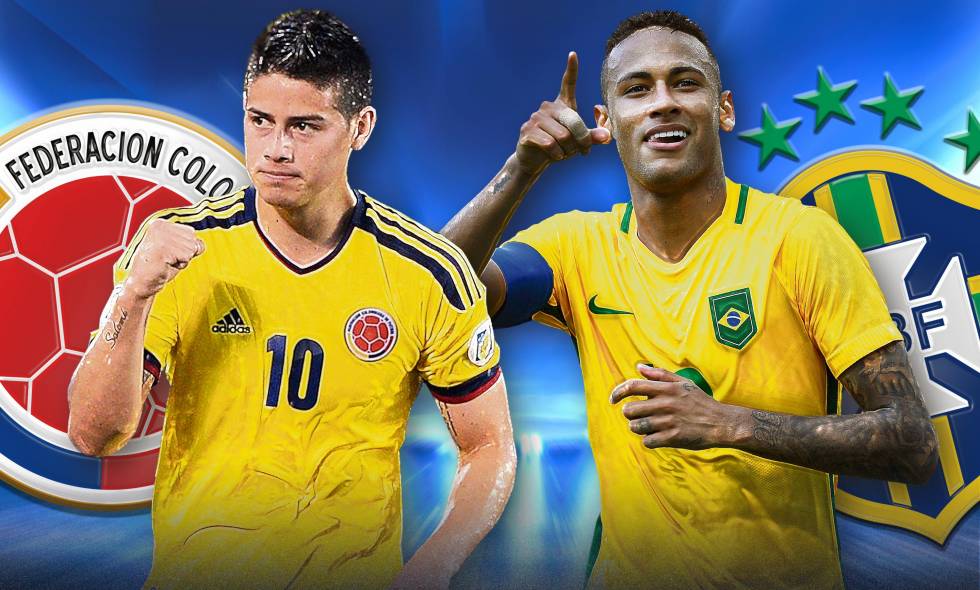 A rematch of a quarter-final between these two teams 4 years ago in Brazil reunites as an even stronger Brazil team set to battle once again against the Colombian Stars. Brazil has the quality to bury them quite easily it will require super performances from James Rodriguez and Falcao for Columbia to hold off the Brazilian attack. I think Columbia will do their very best to hold their own but ultimately it would just be too much for them to handle I think it will be a very close game Columbia will try to hold on with everything they’ve got but I believe the job will be just too much to ask. I see Neymar getting revenge on Columbia after being injured in the 2014 quarter final. Neymar will score the winner and what will be a very tight game Allison. Falcao and James will do everything they can to crack a very good Brazilian defense with a superb keeper I think Columbia can put Brazil under pressure but despite Brazil’s youth I believe they hold on to earn another trip the semi-final they send Columbia home for a second time. In what will be a narrow victory for Brazil. I believe could end up being the same exact score as 4 years earlier as Brazil get themselves into the semifinal.
Score:Brazil 2 Columbia 1
Germany vs. England

Old nemesis and rivals set for another historic fixture in a World Cup quarter-final between Germany and England. Make no mistake these teams do not like each other there’s fans do not like each other this will be a blood battle for a trip to the semi-final. England has some quality in their squad and certain positions as I’ve been mentioning throughout this preview Harry Kane Raheem Sterling and Jamie Vardy are the ones I’m particularly looking at those are all quality players that can do damage against Germany. The question becomes if all three of those players are at their best will it be enough to beat the defending champions. No one’s going to disagree that the German Squad is better but as I’ve said over and over again it’s how you perform on the day. So England have some hope here but the German team is just better. The Germans are extremely well coached by Joakim Low who in my opinion is the best manager in the world they play excellent football there’s not very many flaws but the underlying factor in this match. Germany have been there and done that. Germany has made at least the semifinal in the last 4 World Cups I don’t see that changing here. yes England have some players that can do some damage to Germany but that German Midfield with Mesut Ozil Toni Kroos Josh kimmich Sami Khedira as well as the Young Leroy sane. that’s not even to mention they have the best goalkeeper in the world it will be really difficult for England to outdo Germany on this stage. England just don’t have a strong enough team to take out the defending champions. I think England will do their very best to try to stay in it and to take one over their hated rivals but I don’t think it’s meant to be. Germany will carve England open often and frequently the English Defence will have too much of a job to do and they will ultimately be faced with the inevitable. England are capable of beating Germany but on this stage you can’t bet against Germany I see Germany winning this one to get back to yet another semifinal.
Score: Germany 3 England 1