We have seen an emergence of a star in Rome over the past mouth something the Romans have been crying for. Roma have lost Stars in Mohamed Salah and Miralem Pjanić over the last two seasons. If there is something that this team needs is a young star for the future. With Totti retiring an aging De Rossi, and Edin Dzeko who’s best years are probably behind him as well as a world class Radja Nainggolan who is about to enter his 30’s Roma is a team in need of young stars for the future. One may have just been unleashed from the shadows. The young Turk as shown greatness that his potential provides. Cengiz Under is Monchi’s recent discovery the 20-Year old has scored 3 goals in the last 2 games as he official makes his arrival in Italian football. A young star is something Roma haven’t had on their hands in quite some time not since Alessandro Florenzi. The promise of this kid is tremendous what he can achieve with Roma is endless. He is Roma’s New Sporting Director’s latest discover finding young talent is something he is known for it appears he has STRUCK GOLD with Cengiz Under. Monchi nabbed him from İstanbul Başakşehir F.K. for a measly €13.4 million fee a massive bargain for a youngster especially in the current market he was the 5th highest sale Süper Lig league history. He struggled at the beginning but he has found his feet in this league the Future is here.

When Cengiz Under arrived in Rome this summer he was very exited for this Roma challenge that he was given but he didn’t speak a word of Italian. Which somewhat presented a problem in his early days in the Italian capital. In the beginning of the season he really struggled to adapt to life in Rome he had a big of a shaky start on the pitch. However he got the encouragement from some of the Roma leaders Kevin Strootman and Edin Dzeko were especially helpful showing the youngster the way and giving his the confidence to become the BEAST he is molding into. Once he started to learn the language he started performing just that much better. Eusebio Di Francesco has been a great teacher for him even during in low moments he continued to play him. He continued and contiuned to improve through every start and every game his runs looked sharper and stronger.  He had been quality for the Turkish national team but was yet to Chanel that with Roma. Then low and behold the moment came after two excellent performances in the Sampdoira double. He rose from the shadows against Hellas Verona he was giving the start and before you could blink he put Roma 1-0 up with an absolute screamer blasting it from deep striking from outside the box into the back of the net to score his first goal in Italian football and first for Roma. It was a narrow 1-0 win but it wasnt just the goal he was excellent in all aspects of the game gave is team with many chances to score his quality was finally showing he received the man of the match. This created true excitement in the Italian and Turkish media so much even the turkey president was talking about him. After his first goal he commented saying “I’ve been dreaming of this moment for awhile I want to score many more for Roma”. He would follow that performance up with an even better one as a star was unleashed at the Stadio olompico. Cengiz Under did it again the Turkish prospect put in a superb performance once again as the love affair between the young star and the Roma fans only got stronger. Cengiz Under not only assisted Dzeko with an incredible run and cross that gave Roma the lead in the second half. But he scored not one but two goals putting to bed two superb strikes. When Roma travel to the Ukraine on Wednesday to face Shakhtar Donetsk in the Round of 16 he could make his first champions league appearance for Roma he could be a key for success not only is he hot right now but hes someone they may not plan for. He has shown the quality needed for a future star in this league Roma have a young star on their hands on for the future one that can develop into Roma’s next superstar. 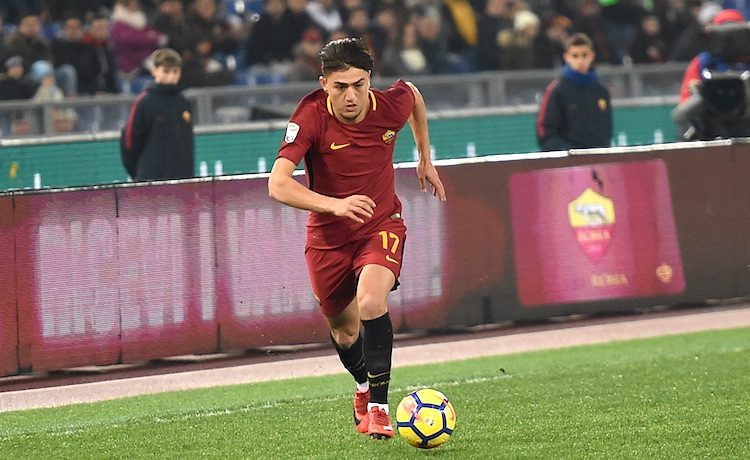 When Cengiz Under was brought to the Stadio Olompico in July the idea was with the Cengiz “Project” was to replace and fill the void of Mohamed Salah. As we have seen he is much more then a Project he has become a vital part of this Roma team. The question asked of him was massive almost too much to ask of a 20 year old. Mohamed Salah was always going to be big shoes to fill hes scored 36 goals and had 22 assists in two full seasons in Rome he was always going to be really hard replace. Its a ton of pressure to put on a 20-Year old. Early it looked bleak at least from the start but I always believed in him and gave him support even when he was criticized. I have referred to him as Roma’s best prospect since his arrival . In my preview I called him Roma’s best signing that is probably not the case now but Cengiz and Pellagrini have the most promise out of any young player at Roma. Is he Mohamed Salah level player at this current moment no I don’t believe he is. However he is starting to show that he was the perfect replacement for the Egyptian. He has played his role in this Roma team and has at times played it exceptionally well. He has all the tools as skills to be able to replace and recapture what Salah did for Roma not only is he younger but I think he could be here a long time he wont jump-ship at his first chance no disrespect to Salah. He is very similar to Salah in several ways which is why I rate him to be the guy who can replace Salah in the long term. Cengiz can play both on the left wing and right wing he also can play through the center and inflict the same effectiveness. He also has rapid pace he is very small in height and has very small figure as well. He has the speed and explosiveness to get into spaces others cant. He has the speed to make the transition from the attack to the defense very quickly. Speedy dribbling and excellent movement without the ball he also have great vision and a strong cross giving him the ability to find his target man like Dzeko in dangerous areas. His left foot is especially dangerous Not to mention the power he has on his shot he has great range and power on his shot as we have seen him bury two of his three goals from distance. He has everything needed and he will only progress he is a combination of Stephen El Shaarawy, Mohamed Salah and Vincenzo Montella. His progression as only just started he has a great combination of skill ability and desire to be the next Roma Superstar. He can deliver greatness to club and country not only is he is showing his rise with Roma but he has scored 3 goals in 7 appearances for the Turkey national team he is the future of the Turkey national team in addition to his Rise in Rome. His chemistry and his development under Eusebio Di Francesco will only help his growth and he tries to mold him in a superstar in Itailan football. He was recognized as the Turkish Dybala when he was in Turkey which is a flattering thing because Dybala is an excellent player. His comparisons with Juvnetus’s Pablo Dybala only continue but I think he can do one better hes NOT the NEXT Dybala he is the first CENGIZ  Monchi has appeared to work his magic remember the #17.