In the second leg of the Champions League quarter-finals between Barcelona and Roma we were treated to champions league history. Roma trailed the mighty Barcelona 4-1 in the first leg as the Romans would need a three-goal victory To go through on the away-goal rule. Barcelona didn’t show Roma the respect they deserved and they punish them for it Roma was the better team throughout the match as they dominated Roma was the better team throughout the match as they dominated from the first to the last minute. Dzeko gave Roma an early lead in the fifth minute before this historic comeback found life with a second-half de Rossi penalty before Kostas Manolas became a Roma hero as he headed home a winner with 10 minutes to go. As Barcelona get a taste of their own medicine seeing Roma pull off one of the greatest comebacks in champions league history.

For the first time in my lifetime Roma has secured a place in the Champions League semi-finals. This is something I didn’t think was actually possible Roma coming into the second leg was down 4-1 on aggregate to Barcelona one of Europe’s best teams. Roma needed to win by a three-goal margin to get through to the semis. Barcelona came back from a 4-0 deficit to make the quarterfinals last year but Roma isn’t anywhere near the quality of Barcelona. This is a Barcelona team that walked La Liga this season and have been European Champions on multiple occasions. No one on earth gave Roma a chance after the first leg. However the 11 on the pitch and Roma manager Eusebio di Francesco believed. Despite spending half as much money being the less talented team with the world’s best player lining up on the other side. Roma were able to do the impossible last night pulling off arguably the greatest comeback in champions league history. As the Romans fought through adversity and believed they could do it none of those players doubted they had the desire and the hunger to pull off the impossible. They now find themselves Champion’s League semifinal for the first time since the Champions League the only European semi-final they’ve been to is the 1983 European Cup. No one believed in them throughout this entire tournament so far they were underestimated every turn and that just intensified the hunger they had. No one saw this coming including myself it was one of the greatest nights Roma have ever had in their history and this will live long in the memory of the fans and players who support this great Club. The champions league is about drama and last night Roma gave the football World 90 minutes of Madness. When Kostas Manolas scored the winning goal the entire world erupted.

Roma was in Barcelona’s danger area on a consistent basis they just kept coming and coming. Barcelona’s defense was as bad as I’ve ever seen them they were absolutely abysmal. They made mistake after mistake after mistake every time Roma cross the ball into the box and it looks like they were going to score because the Barcelona defense was not applying any pressure to anyone they allow Roma to do exactly what they wanted. They had a really tough time dealing with the power and physicality of Edin Dzeko he was unplayable against Barcelona there what’s so much frustration that it led to a violent tackle on the Roma Striker that eventually ended in a goal. Barcelona couldn’t stop anything Roma did their defense lacked desire and didn’t show respect Barcelona were bad all around but their defense was especially bad it could have been five or six goal that’s how bad they were. 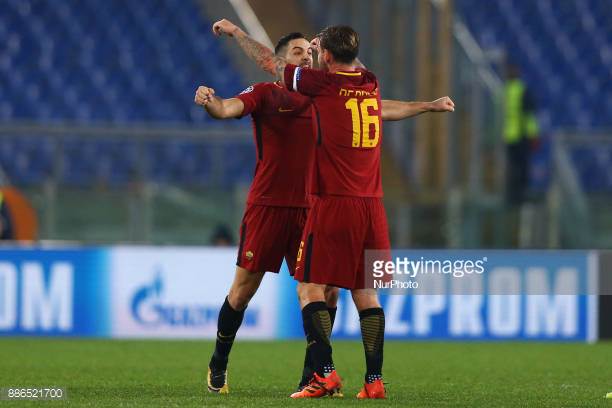 Both De Rossi and Kostas Manolas had a less than stellar first leg at the Camp nou. Both players played poorly and the opening game of this quarter finals with a both of them unfortunately scoring own goals as a seemingly dug themselves in a massive hole. As the scoreline in the first leg did not reflect the game. Daniele De Rossi looked for Redemption in this game and they got it. Kostas Manolas was superb and Danielle de Rossi was at his very best for 90 minutes we saw the Roma captain go vintage one of his best performances in the Roma shirt in his 15 years of service. Both of these players highlighted the victory the own goals they scored in the first leg was soon forgotten as they made amends for both of them. De Rossi scored  crucial penalty in the second half to give Roma a 2-0 lead the most important penalty of his entire career this goal gave them hope to pull off the upset. Then with less than 10 minutes ago Kostas Manolas also made amends for his own goal. As his header insured Roma the come-from-behind victory as the upset was complete. Both of these players played a large role in turning this around from frustration to Champions League Magic.

Messi is the second greatest footballer in history according to my estimation. This Magician of a footballer doesn’t have many bad days one of them happened to be in the first leg then it coming off a great performance in the league it was expected that he would give Barcelona the goal to put this thing away for good however it was not to be desired Leo Messi struggled yet again against this Roma defense. Furthermore Roma only had three defenders in their lineup last night and Messi didn’t have one genuine chance where it look like he could have scored. This may be harsh but there were times it seems like Messi lacked desire or thought the game was already won. On several occasions I saw him walking around it really didn’t look like he wanted it that bad. Coming into this game Messi has not scored in the quarterfinals of the Champions League in many years in fact the last time he  scored at this stage the only had one Ballon d’Or to this date he has five. This shows how much he has struggled at the quarter final stage. We should have seen a dominant Hungry Leo Messi but we didn’t. even at times when it looks like he could do something he was immediately stopped by the Roma defense this might be harsh but I think it’s fair to say that Leo Messi in the Champions League is somewhat of a disappointing player to not score a single quarter final goal in so many years is unexcusable for the world’s best player. He came up short against this Roma defense twice and he went down swinging on both occasions I don’t know if they had his number or he didn’t want it enough either way it resulted and another disappointing loss in the quarterfinals for Barcelona since they won their last Champions League they have been eliminated at this stage every year. 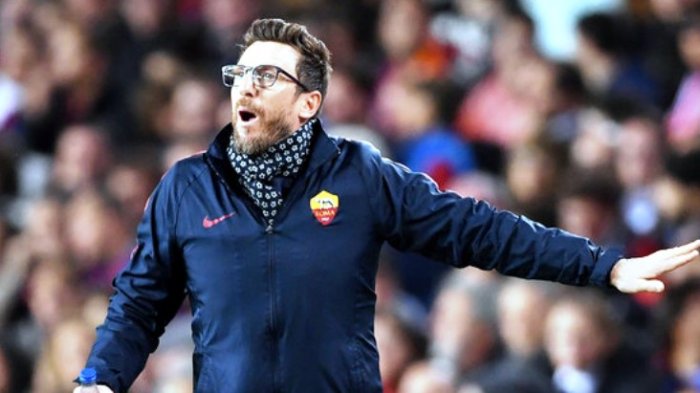 In this tactical battle between Eusebio Di Francesco and Ernesto Valverde The Roma manager came out on top again. These two teams faced off in the Europa League a few years ago in a match between valverde’s Atletico Bilbao And Di Francesco’s Sassuolo. with Di Francesco getting the advantage there in a 3-0 victory. It would be a repeat of that Di Francesco Made a formation change. The Roma manager went to 3 at the back as Roma operated out of the 3-5-2 formation. He absolutely got it right an Incredibly attacking Midfield was a large part of their success in this game. Not to mention the three of the back completely neutralized Leo Messi and Luis Suarez. Alisson Didn’t have to make that many saves in this match and it was because of Roma’s lineup. Even the controversial move up front with Schick and Dzeko worked wonders he knew what he was doing. In addition to all that the substitutions he made were spot-on both changes in some respect change the game. He brought in El Shaarawy and Under in the second half both players made immediate impacts El Shaarawy nearly scored less than two minutes after coming on. Under made a great impact as well he assisted the winning goal and pressurized Barcelona on several occasions. Say what you want about this game Di Francesco outcoached Valverde and it wasn’t even close.