A semi-final between two countries that weren’t even supposed to be here. With France patiently awaiting for one of these teams in the final on Sunday would be a battle between two countries and two Nations that we’re not even expected to be where they are. An England team who hasn’t had this much success and a long time as England attempts to make their first World Cup final since 1966 with the hope and ambition to bring football home to its birthplace. England would go against a Croatia team that have often been referred to as dark horses during this world cup as well as in previous tournaments. A country that even the most ambitious people did not expect to make it this far they have been the Dark Horse of this World Cup. Both teams did extremely well to get to where they are now with an opportunity for one of these countries to make history in World International Football. Two teams with the opportunity to play in a World Cup final something that seems impossible for both England and Croatia going into this world cup no one truly believed in them and now they find themselves within a match clinching a spot in the World Cup final. A battle for the first title since 1966 for England and for Croatia a country of Just 4 million people this was an opportunity to make an historic World Cup final for the very first time. England fans have sung the song it’s coming home referring to England winning the World Cup taking it back home from football’s birthplace. Unfortunately England while making great progress for the national team they failed to take them on the brink of Glory. England scored an Incredibly goal to give themselves a lead in the opening 10 minutes off of Kieran Trippier free kick to send the entire nation into ecstasy. It’s a lead that England held onto for the majority of the match before Inter Milan midfielder Ivan perisic equalized late in the second half. His goal would eventually force extra time Croatia took that momentum into extra time. Then on the brink of the dreaded penalty shootout Mario Mandzukic heroically bounced back from an earlier injury in the game to slot home the game-winning goal to send Croatia to an historic World Cup final. They will face a incredibly deep French team on Sunday but they have made their country proud as they become the second smallest country to ever play in a World Cup final. Once you get in the World Cup final all you need is a chance if they perform on their day they could turn the impossible into reality.

England ended up getting second in their group only falling short to Belgium as they Advanced out of one of the easiest groups in the entire tournaments. England faced off against a Colombia Team without their best player James Rodriguez in the round of 16. It was a bloodbath between both teams but against all the odds and history England ended up in a penalty shootout against Colombia against their previous reputation England won a penalty shootout for the first time. In the quarterfinals they were matched up with fellow Dark Horse Sweden a game in which they prove to the world how good they really can be. It was an incredibly strong performance despite the not having played the toughest opposition they performed at an extremely high level and even though it was against Sweden it was very convincing. Harry MaGuire gave England the advantage in the first half with a bullet header. Before in the second half Dele Ali headed home a second to put the icing on the cake in what was a very convincing performance to get to an historic Semi final for the first time 1990 making great progress with English football on the international level bring themselves into the semi-final with the opportunity to win it all. Croatia by surprise managed to win their group despite having Lionel Messi and Argentina in their group. During the group stage Croatia or the most impressive team in the World Cup they look like a team that could go all the way. Croatia ended up having to play Spurs Superstar Christian Eriksen and Denmark in the round of 16 period a very odd game with two goals being scored in the first 10 minutes including Denmark scoring their opener in the first 60 Seconds. Croatia were not at their best but they got to a penalty shootout despite having a chance to win it from the spot a few minutes before the shootout. Croatia ended up becoming Victorious winning the shootout with the Croatian goalkeeper saving a World Cup record three kicks in the shootout. In the quarterfinals they went up against the hosts Russia with the entire country behind them it was going to be an incredibly tough game. Despite having quite clearly the stronger team Russia struck first with an insane goal. Croatia eventually equalized before the 1-1 scoreline was pushed into extra-time. Croatia scored in the extra time to attempt to put the game away but Russia scored With about 10 minutes remaining in the second half of extra time to equalize forcing yet another penalty shootout. Despite picking up a knock earlier in the game Croatia’s goalkeeper once again was the hero saving a crucial kick that eventually set up Ivan Rakitic to score a winning penalty to eventually send it Croatia into the semifinals with a Chance to play in their first ever World Cup final.

The game of football is about drama chaos and excitement this match would turned into all of that and more as it required 120 Minutes to find a winner. England and Croatia have been widely considered as underdogs throughout this competition in this world cup no one would have expected them to reach the semi-final. The fact that both England and Croatia are here was another reason why it’s been such an incredible World Cup this tournament has been all about The Underdogs. This game got off to exceptional start for England as there was a goal in the opening five minutes. On a early free kick by Kieran trippier England found the back of the net with an exceptional goal off a set-piece to give England the early lead. There was an explosion from the England supporters. England could not have started the game any better one shot one goal. England pressurized Croatia in the early parts of the first half showing quality but really failed to do much after that.  Croatians were no pushovers they defended well and when they got space to operate through their Midfield of Ivan rakitic Luka Modric and Ivan perisic. Which turned out to be an incredibly strong Midfield which allowed at Croatia to get into scoring opportunities frequently. This is not even mentioning the Firepower up front they had with Mario Mandzukic. The first half ended with England holding a 1-0 advantage but Croatia was coming. Croatia was attacking with much more success despite not having scored they were getting into dangerous areas almost too easily. England refused to make adjustments as Croatia just continued to attack them they were clearly the better team for the majority of this match just needing a go to get themselves back in it. Ivan perisic hit the bar as Croatia were edging closer to an equalizer. Then the moment arrived as Ivan perisic made up for his crossbar miss finding the back of the net to equalize making it 1-1. Croatia had several other opportunities to score at the back half of the second half but it remained even as it would require extra time. After the first 15 minutes of extra time it remained even however right before the break Mario Mandzukic ended up hurting himself in what looked like a minor injury however he would still soldier on refusing to go off. Then within 5 minutes of the second period of extra time despite being hurt Mario Mandzukic became the hero scoring the game-winning goal in the 110th minute as he sent Croatia into the World Cup final ending England World Cup dream as Croatia would hold on to win 2-1 in extra time to make an improbable unlikely World Cup final. Croatia will play France on Sunday in the World Cup final. Croatia do have an exceptional Midfield as well as quite a bit of quality up front so there’s always a chance. However I stand by my prediction all along France by my estimation will win the World Cup they are too talented to Skilled and Too Deep to be stopped there is far too much star power and they play extremely well as a team. However Croatia can push them and make things difficult on them I don’t think they have enough stop this French team but you never know and maybe that motivation will be enough to shock the world but realistically this France team is too good not to deliver the World Cup but in this world cup you just never know. 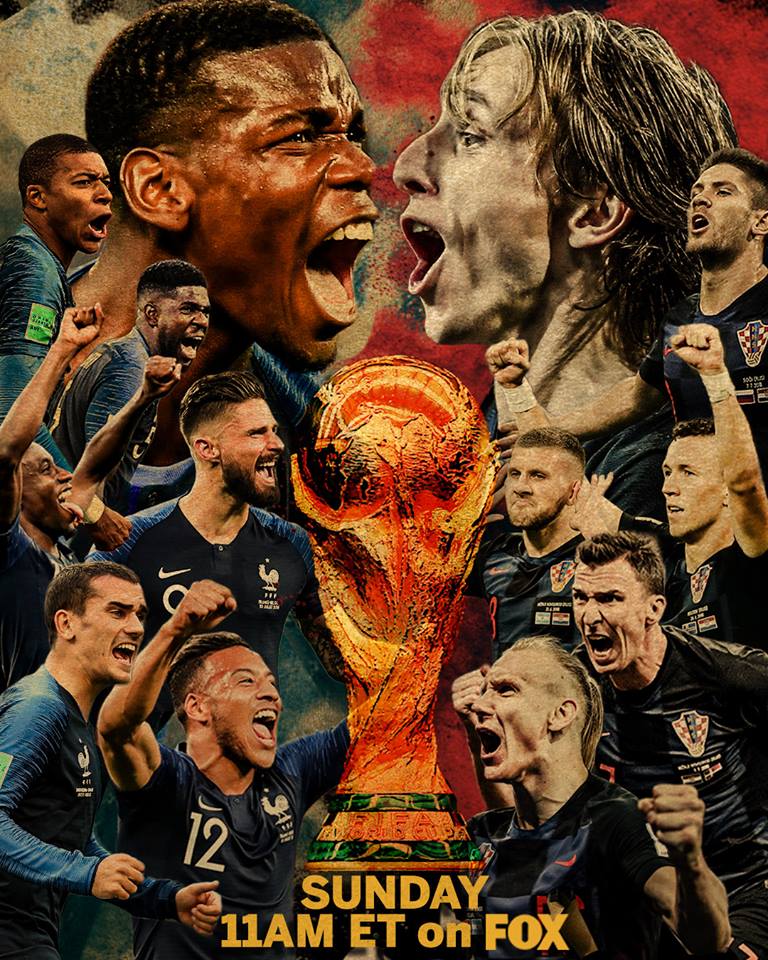