As a week-long international break concludes League action returns this weekend. Roma are coming off and opening 3 games that have them on the worst start to a season in 5 years. Fortunately for Roma they have several games that they should find no problem picking up the maximum points. Roma are set to kick off the season again as they will welcome Chievo to the Stadio Olimpico and just their second home game of the season. They are set to take on a Chievo team that are currently at the very bottom of the table a game in which Roma need to win. In their two meetings last season Roma won the season series with a win and a draw against the flying donkeys. Roma look to turn their season around this weekend to try to pick up their first win at home this season. After a poor start to the season Eusebio di Francesco is in the hot seats as the representatives of Antonio Conte have already been contacted. He must find a way to win or the pressure will really mount on his job. It is just the fourth game of the season but an extremely important one there’s no need to panic but this Roma seem needs to start picking up more points and I fully believe they will do so to try to get that momentum that made them so successful last season.

There are some positives and negatives coming out of the international break. Roma starting right back Alexandra Florenzi is expected to be back for this class to resume his position. In addition to that Roma get Diego Perotti is back from injury and can add more depth to an already deep team. Unfortunately Patrik Schick Kostas Manolas are expected to miss out while heavier Pastore remains questionable for Sunday’s game. This is what I would call a reaction game Eusebio di Francesco made it tactical mistakes against AC Milan and because of it they not only lost the game but they lost their current away form which was the best in the country. He cannot afford to experiment with another unusual formation. This team  must lineup in the 4-3-3 formation because it is the most effective it is not the time to take a risk especially when Roma will be heavy favorites. The injuries won’t effect the team drastically but some changes will have to be made. Roma’s attack is likely to line up with Stephan El Shaarawy Edin Dzeko and Cengiz Under. So a somewhat familiar front 3 for Roma and this game however there could be adjustments made in the Midfield. This will all depend on the health of Javier Pastore. I think we could possibly see a Midfield of De Rossi Steven Nzonzi and Bryan Cristante. I just don’t think unless Pastore is a full fitness they should risk it. If he is healthy it’s somewhat possible he could play up front or in the Midfield so as of now it’s a little unsure. the defense will likely remain more or less the same with the addition of Ivan Marcano in for Kostas Manolas who’s expected to miss through injury. Roma will also have other options Off the Bench and crucial moments with Diego Perotti Justin kluivert and Javier Pastore. It is also possible that Perotti will get the start but based on full fitness El Shaarawy is probably likely to start so Perotti will come off the bench in all likelihood. Roma have too much Firepower to not win their game so their lineup should be more than enough to pick up the three points.The key player for Roma will be at in Dzeko he’s coming off two incredibly good performances for his national team and I expect that form to carry into this game.

Chievo find themselves at the very bottom of the League table. Having only really performed well in  opening weekend against Juventus. Since then they have been less than impressive. That included a 6-0 pounding by Florentina. In all likelihood they’re probably going to work with some of  defensive tactics because they are in need of points especially against the big teams on a simply skill level they are not even in the same stratosphere as Roma. Which is why they probably are  going to try to play as defensive as possible. But will probably release some of their attackers forward to give them the best chance of scoring a goal. They don’t really have any player that will appear to be a major problem. They’re going to be in a relegation battle all season which is why they wont take too many risks they will likely try to get a point from this game which is already a tough task. I don’t think they will park the bus because I think they will push forward but they’ll be conservative about their attack of the Roma goal because they don’t want to be punished for costly mistakes. Especially playing away from home it’s going to make it even more difficult. The key player for them Stefano Sorrentino his goalkeeping performances denied Roma of three points last season he’s going to have to play at the top of his level to deny Roma a second time. 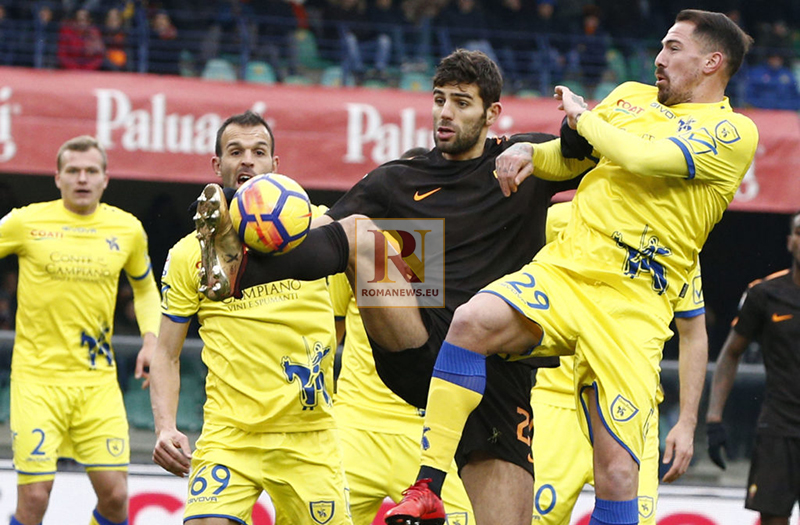 Roma simply cannot afford not to win this game and I believe they will.  Roma will finally get some momentum to give the team more confidence going forward. Roma have several injuries but it won’t keep them limited because of the options they have off the Bench. The fact they have so many ways in which they can potentially hurt Chievo. Chievo will have to use all their energy and trying to prevent Roma from getting in attacking positions. So much of what they do will be predicated on defensive play to try and steal a point in Rome. Roma are going to be at home they know the importance of this game and they will not allow themselves to lose it. Edin Dzeko comes into this game in excellent form and if he is given service he will find the back of the net more than once. Roma’s Midfield will be important and pushing the ball forward the Roma Midfield is incredibly strong they will be hard to maintain because of their ability to get the ball forward and create scoring chances with the Roma attack. Roma’s defense has really struggled this season so it might be a little more open than you would think Chievo could find holes in the Roma defense and that’s their best bet if that happens they need to take advantage which already is going to be incredibly tough because of the form that Roma goalkeeper Robin Olsen is in. The importance of this match could not be any more clear they have not had a good start to the season so Roma really need to perform at a high level. They almost need a convincing victory to have that momentum and confidence going forward. Chievo won’t provide much and the fact that they are without a proven goal scorer they’re going to find difficulty Roma need to neutralizer the Midfield so they can get into the attack as much as possible. Maybe not on the counter attack but if they get into space and crucial situations I don’t think they will be let down. Roma should carve them up but based on the way to season has gone that’s easier said than done.