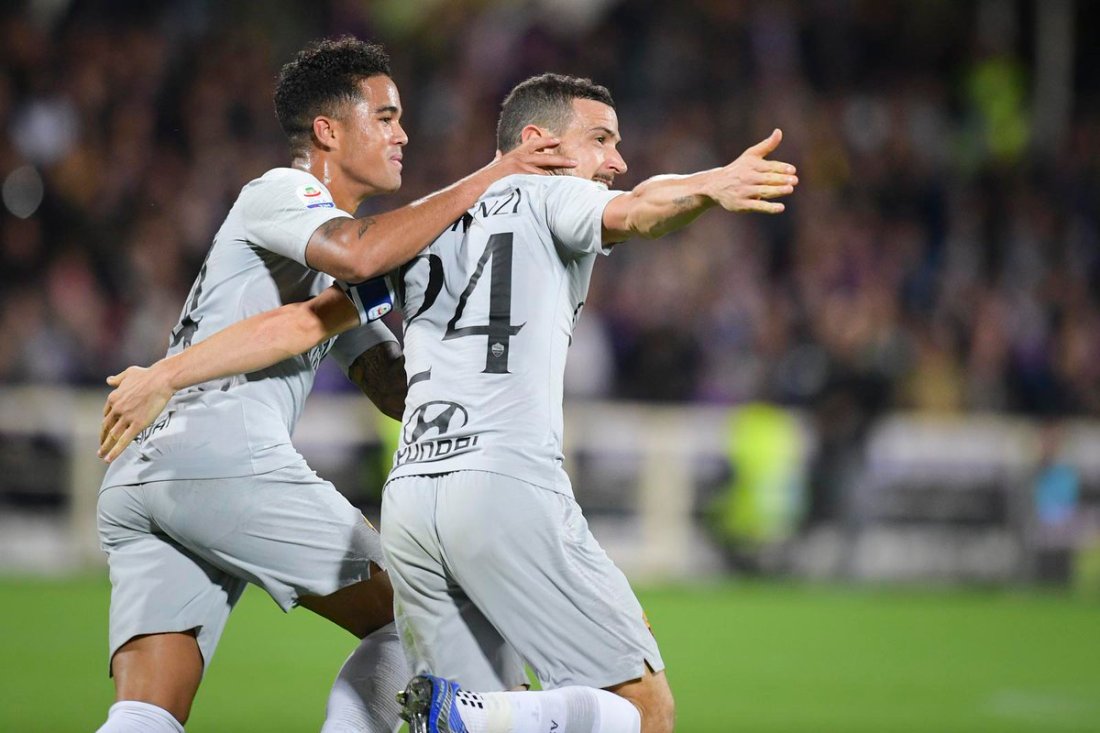 Roma traveled to Florence to take on Florentina Saturday a team with equal points going as Roma. What we saw was a very competitive games that had a bit of controversy. It was very evenly-matched even down to the problems the teams were having it was a lot of similarities in the way they played and what they struggled with which made the game very tense given what a victory in this match what I meant for these teams. It is well-documented that Roma have not done well Stadio Olimpico so being away from home helped them slightly at least it seems that way nobody really seemed in control until the end of the first half. As Roma started to get some superiority in the match but right when that happened controversy hits. Giovanni Simeone fell after barely being touched by Roma goalkeeper Robin Olson he fell to the ground giving Florentina a controversial penalty. No VAR was used for a penalty that should not have been called. Florentina took the lead through Jordan Vertout sliding the penalty home. Earning a 1-0 lead after the first half in the second half Roma tried to engineer a comeback. Roma were superb in the second half but they were playing a game against the clock a loss here would have been unacceptable despite the circumstances. Roma vice-captain Alexandro Florenzi helped organize a Roman comeback . At the death of the match with only a few minutes left Florenzi found the back of the net to steal another point away from home. Roma got the goal they deserved but wasn’t able to secure the three points despite an excellent second-half performance. 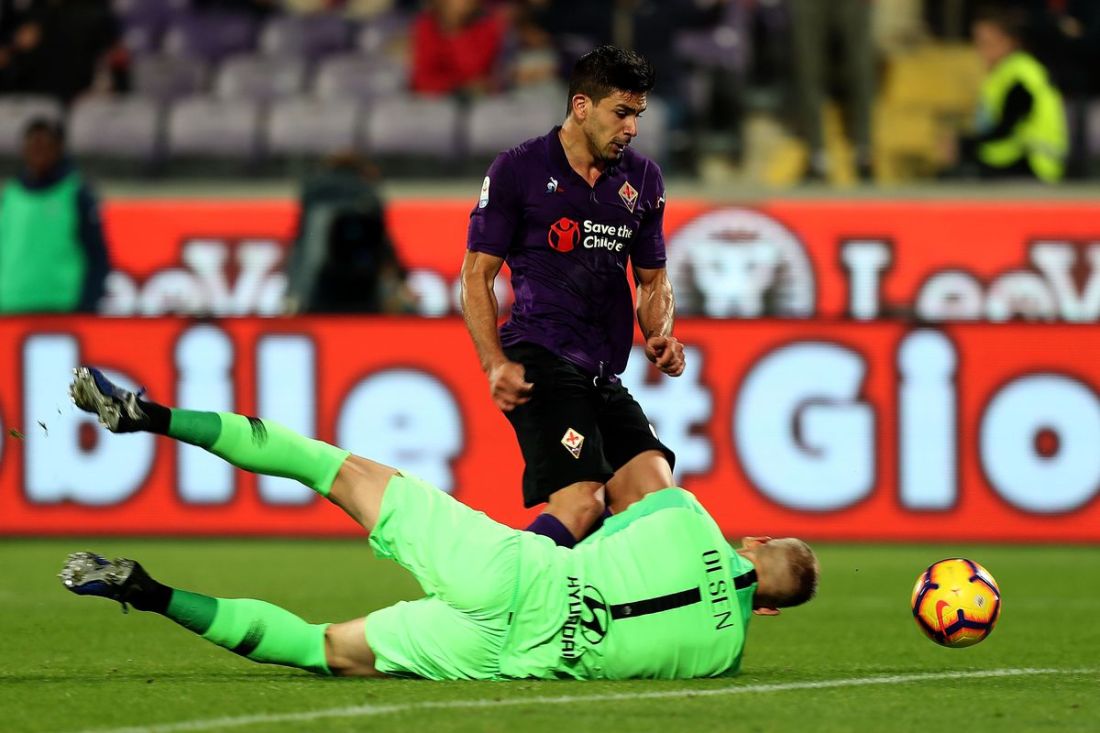 There was some controversy in Florence yesterday night was a penalty call that could have completely changed the outcome of the game. Florentina was given a penalty at the end of the first half after Giovanni Simeone was barely touched as there was literally no contact made between him and roma goalkeeper Robin Olsen in fact the Florentina striker actually ended up kicking Olsen in the face. Simone made very little contact as it only barely touched the hands of Olson. It wasn’t just not a penalty it was a penalty called that could have given a Florentina a win that they didn’t deserve. Obviously there was Injustice with the call that was given against Roma but that’s not the real issue here. In a moment like that in a game between two equally match teams in which points were incredibly important to not even consult VAR is a huge problem. Regardless of the situation unless it’s a Stonewall penalty they need to consult the VAR to clarify if the call with correctly made. Simeone didn’t make any contact and exaggerated the fall. It was a clear dive no question about it. A player of Giovanni Simeone size and stature cannot be brought down that easily regardless of the situation. The penalty could have changed the entire results while we know Roma eventually equalised but in theory this call stole a win from Roma. This is the top level of Italian football in questionable situations like the one we saw Saturday night. We need to consult a VAR if you have this system in place and we decide not to use it then what’s the point? Even if  the ref felt the pressure of the home fans he has to make the call correctly it is in no shape or form a penalty. It was penalty Injustice if that penalty never happens the outcome of the game could have been different.

The lack of clinical finishing 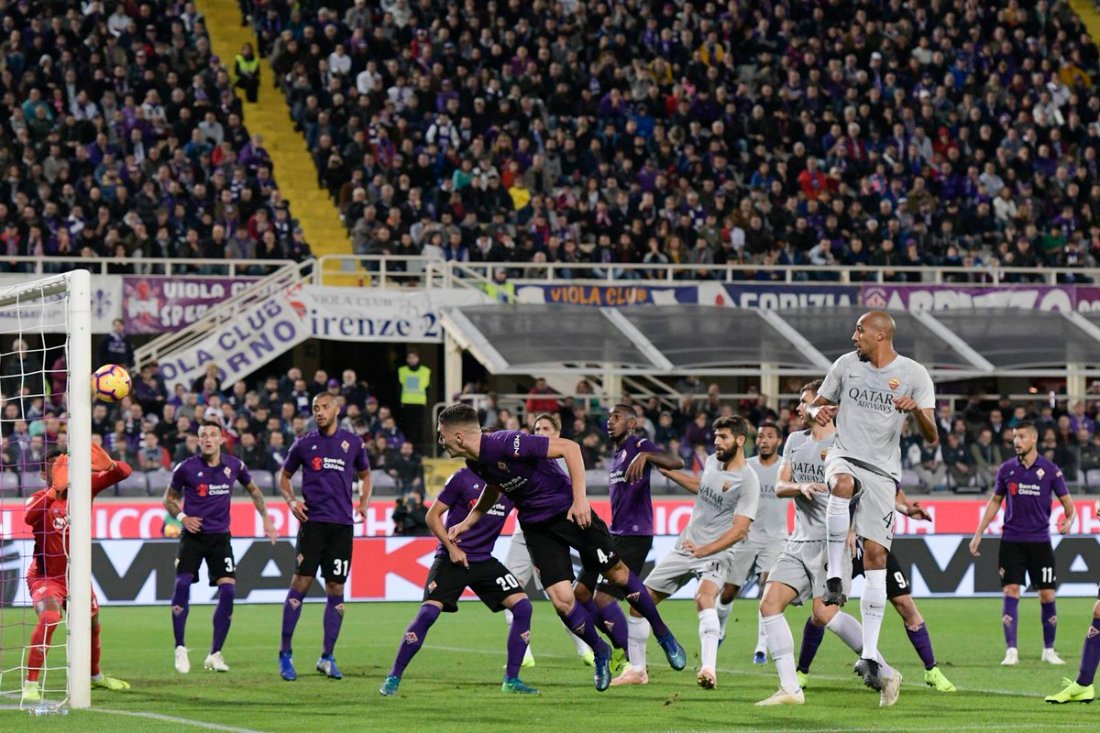 Something this game lacked was clinical finishing in front of goal. It wasn’t just Roma and it wasn’t just Florentina as well collectively both teams struggled put their chances away. Florentina was wasteful and roma was exceptional up until the point they got in front of goal. It is an issue that Roma have dealt with for many weeks this year even going back to last year. Florentina is no difference they have an attack filled  team with super-talent much like Roma and neither team could come through when it was necessary. They combined of 24 Shots between both teams only 7 where On Target. Roma could have won this game much more handily had they taken care of their business in front of goal. This is something that needs to be corrected and fast for both these teams this was a hugely important match and nothing really changed both teams got one point and it didn’t really make up any ground in their ambitions to get into the Champions League places. It was a miserable day for both teams in front of goal something that needs to be fixed if their goals are going to be fulfilled this season. 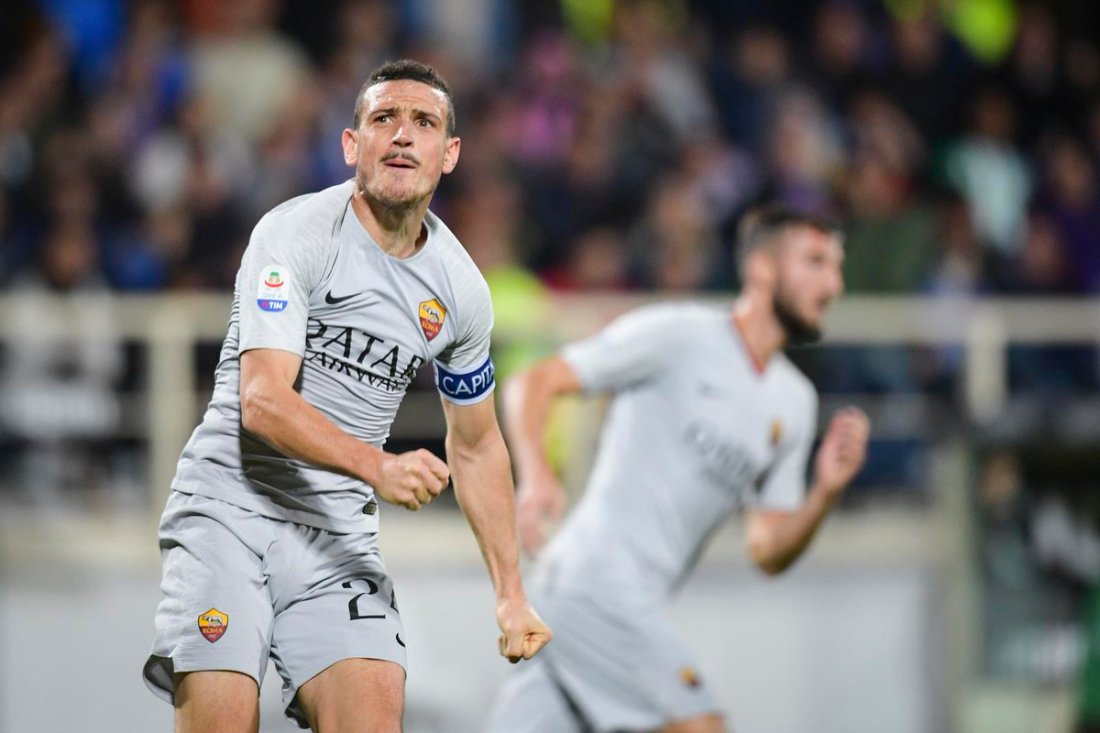 Roma came back to earn a point and a large part of that was Roma Captain Alexandro Florenzi who was filling in for daniele de Rossi. As the team captain the former Roma Academy graduates not only scored the crucial goal with just 5 minutes ago but he led by example throughout the match. After the controversial penalty that was given against them Florenzi helped them focus on the task at hand rather than worrying about things they could not control. He was very vocal on the pitch and getting his guys into the right areas. After the game he spoke about the battle through adversity as he described that the team of played well in the second half and even if controversial moments happen the team still has to perform. It wasn’t just his leadership that helped Roma get back into the game it was his impact on the pitch he was the most impactful player throughout he impacted the game not only in defensive but attaching situations. When he was on the wing he was absolutely dangerous and got his teammates involved as much as he could. He displayed all the traits that a captain should he scored the equalizer and led his team to a hard-fought point despite the penalty called change momentum he got his team to focus and escape with a point so they truly deserved. 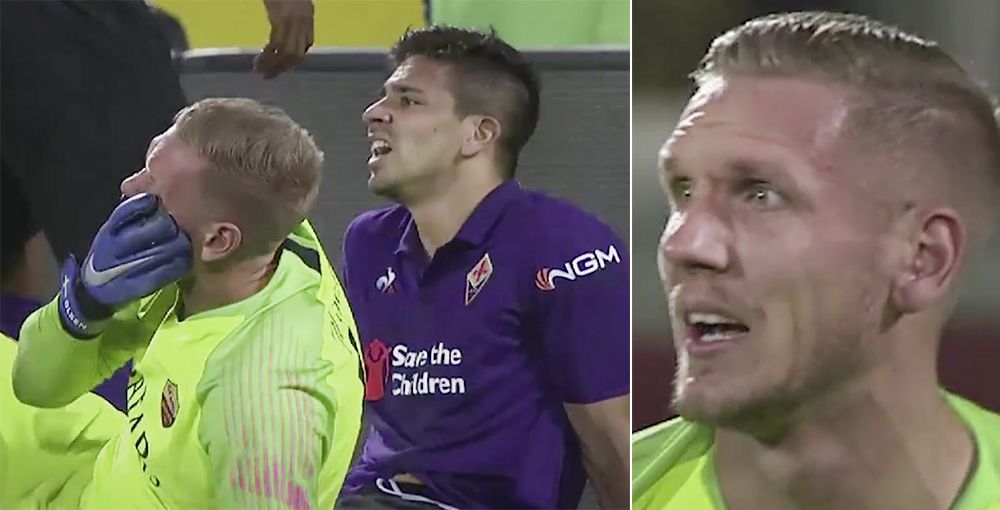 When you give up a penalty before half-time it is always difficult to put it aside. Roma were given at this dilemma in Florence they had to battle back from giving up a penalty that should not have been called. At times it can be a psychological disadvantage and it can mess with your mentality to go and get the points. Roma struggled with it for much of the game. However Roma found a way to battle through the adversity and to steal a point away from home once again. They were very wasteful in that first half but in the second half they corrected their opportunities and became much more consistent especially in the creation of their chances Roma turned the corner and in the second half was without question the superior team when it was unclear after the first 45 minutes. You could feel the Romans picking up steam prior to the penalty they were able to put that aside and find a way back into the game. It took a long time and they nearly lost but in the very end of the match they were able to get a goal taking advantage of the opportunities they were given. It was a goal that Roma certainly deserved and in addition to that they probably deserve to win the game. Having to deal with a controversial penalty decision sometimes can be very difficult because of how infuriating it is in the moment they were able to put that in the back of their mind and continue to try to perform at their best it resulted in getting a point. Roma would have liked 3 but another point away from home is something to be positive about. Without the penalty Roma would have surely won the game. In the second half Roma improved and still played well which was barely mentioned which I think is a little disrespectful. Given the circumstances of the match for Roma to come back in the way they did deserves a lot of credit it is very difficult coming back after a wrongly given penalty but to do that away from home in a hostile territory it’s not an easy task and they conquered it 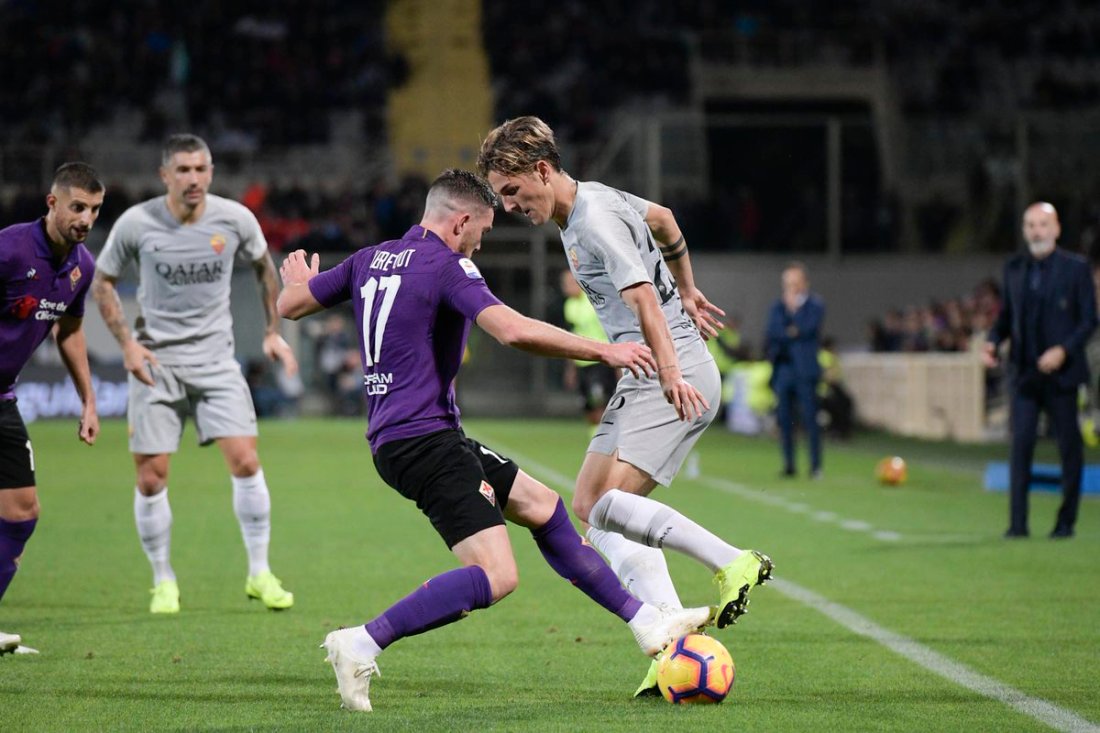 Florentina defensively did a really good job on the Roma attack. Roma controlled possession for the majority of the match and got into dangerous areas almost on a consistent basis. For Florentina to hold off until the very end was impressive. You could see that the goal was coming but still performed really well defensively especially after they took the lead. The penalty call change the game as I mentioned however Florentina adapted to the change in circumstances. They don’t have the most solid defense in the league not even close but they played above and beyond what anyone expected of them. At times they showed how physical they can be especially when marketing Roma’s physical players like edin Dzeko, Steven Nzonzi and Federico Fazio they have a lot of size and for much of the match were  able to compensate for it. A superb defensive display from the viola if they are able to continue to make progress with their defense it will make an already strong team even stronger