Roma are coming off a disappointing 2-0 loss to Real Madrid in the champions league on a Tuesday night despite that they secured their place in the Knockout stages for the second consecutive season. In the league they suffered a disappointing loss to Udinese despite dominating. Roma have no time to mourn over the losses as they prepare for one of the biggest matches of the season for many reasons. Roma will welcome Inter Milan to the Stadio Olimpico on Sunday night for Serie A game of the week a match that is hugely important for both sides that also happen to have an emotional element to it. Now while Inter Milan and Roma are not direct rivals they do not like each other and I’m guessing we will see a very intense and aggressive atmosphere. Much like Roma Inter Milan lost in the Champions League this week to Spurs meaning qualification will come down to the final stages of the Champions League group stage. Both sides are looking to rebound in what should be excellent match of football. Last season Inter Milan won the season series for the first time in several years with a controversial 3-1 win at the Stadio Olimpico and then split points at the San Siro. This time there is even a different emotional element to this match. We will see the return to Radja Nainggolan to Stadio Olimpico a place in which the Belgium spent the last five seasons he is still adored to this day in Rome. A big transfer deal that also involved Davie Santon & Nicolo Zaniolo as they have a shot at a club that gave up on them. Not to mention Luciano Spalletti returns a manager is absolutely hated at the Stadio Olimpico despite the fact that he had spent several years as Roma manager he has issued disrespect to the club many times since his departure and the things that he did rubbed fans the wrong way. Inter Milan are on the right side of the table with an opportunity to continue to push for Juve even though I believe it is a lost cause. Meanwhile Roma have struggled with inconsistency this season and will be shorthanded due to all the injuries they have at the moment. Inter Milan go into this match as favorites but will be emotional aspects give a Inter Milan the advantage or can this short-handed Roma team pull off the upset. We will find all that out and more on Sunday night at the Stadio Olimpico.

Roma are dealing with a major injury crisis which could drastically affect the impact of match. Daniele de Rossi Javier Pastore Diego Perotti all remain out with their injuries. Meanwhile three of Roma’s most important players have picked up injuries over the last week Lorenzo Pellegrini Edin Dzeko and Stephan El Shaarawy. It has been confirmed this morning that Edin Dzeko and Stephan El Shaarawy will both miss three weeks of action meanwhile it is unclear when Lorenzo Pellegrini will return. Due to the injury bug that has hit Roma we will see a very short-handed Roma team that will be forced to make more adjustments to their starting lineup. In doing so their bench will be very thin giving DiFrancesco very limited options. We are likely to see a very similar defense to the one Roma played against Real Madrid because of the lack of depth that Roma have right now they have to play their strongest defense possible especially when facing a team with fire power up front. With De Rossi still out we are likely to see the partnership of Steven nzonzi and Bryan Cristante in defensive Midfield I think they have done really well together and the way they performed will be key in this matchup. In the attacking Midfield Roma are likely to put out a very young Trio of attacking options. Due to the injury of Lorenzo Pellegrini former Inter Milan youth product Nicolo Zaniolo is likely to get another start mostly because Roma don’t have that many other options and he has played more minutes this season than Coric who would have been the alternative. Justin Kluivert and Cengiz Under on the wings this could be a very dangerous attack if they have space to operate. El Shaarawy and Lorenzo Pellegrini have been the most important players for Roma in the Midfield despite that Kluivert and Under have it pace and athleticism that could tear Inter apart on the counter attack. I wouldn’t underestimate Nicolo Zaniolo he has played really well in his last few games when he’s given the opportunity against Real Madrid I thought he was one of the bright spots he is Young extremely talented and quite intelligent for young player. Again up front we will probably see Patrik Schick again as he will be continuing to fill in for Edin Dzeko. Patrik Schick is going to have about three weeks where he will be Roma’s number one choice at striker it is his opportunity to prove himself and try to justify his big price tag from a year ago. Roma’s key player in this match for me is Robin Olsen he has proven to be one of the better Keepers in the League this season and if mistakes are limited and he performs to an excellent level Inter could become frustrated. 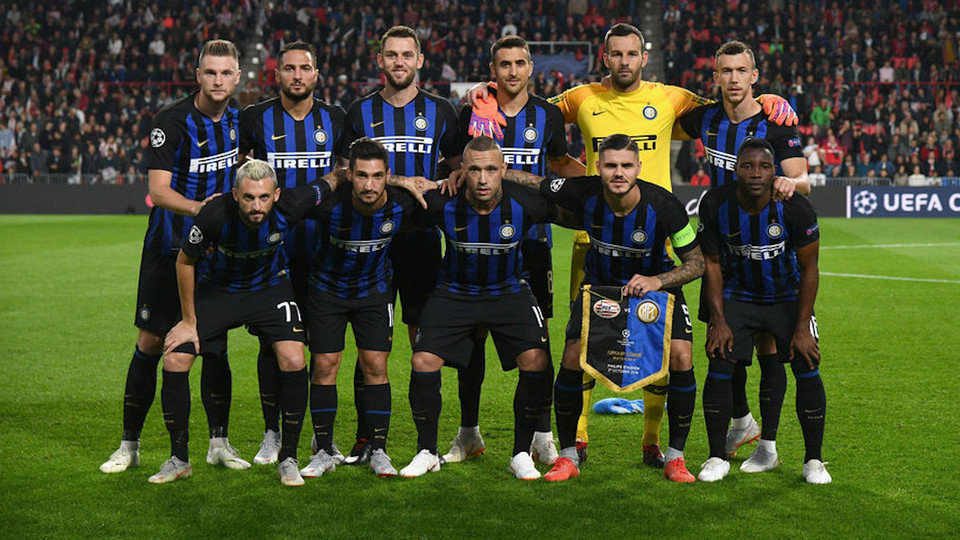 Inter Milan have done really well this season putting themselves in the top 3. It hasn’t all been positive though there are games and which they have underperformed coming off A loss in a Champions League match in which they could have qualified might mess with their Psyche. On paper Inter Milan is an excellent team but they’re not without flaws you can break this team down if you have the right materials. Inter Milan however has seen the emergence of Keita after coming from Monaco this season he was expected to show the form he displayed at Lazio a few seasons ago. Last week he had an unbelievable performance being responsible for all three goals. Inter Milan have a brilliant goalkeeper who is going to make things tough arguably the best defender in the league in Milan Skinner and a pretty solid Midfield. However it will come down to the effectiveness Marco Icardi Inter Milan Striker has just been on fire this season but he isn’t without weaknesses. He can be neutralized and Inter Milan need to make sure that does not happen. If you’re able to neutralize Marco Icardi all of a sudden Inter Milan isn’t that dangerous. Radja Nainggolan also is going to be really important he has played in this Stadium very frequently this used to be his home and he has put in some very special performances at the Stadio Olimpico. If he does score he wont celebrate but I do expect him to do whatever it takes to break Roma down when possible. Other than that Inter Milan have been in excellent form they have won four of five matches and continue to have momentum going forward they are a confident bunch right now and have a few lineup options that could be decisive. However things stop and end with Marco Icardi he is without a doubt the key player for Inter Milan if he is neutralized Inter Milan isn’t the same team that’s why it’s important that he performs well.

Anything less than three points from Inter Milan should be viewed as a disappointment. If both teams are healthy there’s very little difference between Roma and Inter Milan. It would be a harder game to decide between because you could make Arguments for both teams. However Inter Milan is not facing fully strength Roma they are facing wounded Roma. Roma are short-handed and dealing with a huge injury crisis. It’s not only the injuries themselves it’s who is injured. Stephan El Shaarawy Edin Dzeko & Lorenzo Pellegrini are all out and  an argument could be made they are the three most important players for Roma. Roma is going to be without all three against Inter Milan which gives Milan a huge advantage to get three points and continue their momentum a win against  Roma could go a long way. However I do believe this is a statement game if Inter Milan are unable to win against a Roma Team without their three best players it says something about them it will prove the fact that they are not progressing well enough given Roma’s dire situation. From Roma’s point of view any points you can get in this match has to be viewed as incredibly positive. Roma have been consistently inconsistent this season and the fact that a lot of their players are injured isn’t going to help the situation. It gives DiFrancesco very limited options to play with off the Bench almost depending that their starters do the job which is a tall task for the young talent on this team. There’s no question in my mind that Roma have players that can wreak havoc on Inter Milan Justin kluivert Cengiz Under both can be incredibly difficult to have to deal with especially if they get forward and they’re running their mutually Unstoppable given the speed and athleticism that these Roma youngsters have. However they are still a relatively young players which is why we might see a very conservative approach at least in the opening 15 to 20 minutes. Like I say every week Steven Nzonzi and Bryan Cristante have a huge role in trying to ignite the attack. If Roma can get on the break they will be incredibly difficult to contain Kluivert and Under have rapid pace and Nicolo Zanilio has good speed who can make intelligent passes. The momentum is all in Inter Milan favor given very limited options from Roma they can find ways to break through. Defensively they have to also limit mistakes  Roma may not have proven stars but they have a lot of talent and they just might rise to the occasion in a huge match. The job of Roma is quite simple neutralize Marco Icardi and don’t make mistakes. Defensively they have to be tough and strong make intelligent passes and I don’t overcompensate for anything Roma for the most part need to play it safe. Marco Icardi it’s not a player to influences the game when he’s not in a scoring position if you take him out of the game as long as possible Roma have a chance to steal points here. He’s one of the best finishers in the league but only takes a few touches to get his goals when he’s not coming forward when he’s not attacking he doesn’t really serve that much of a purpose if you humanize Marco Icardi for the majority of the match Roma have a real shot but in order for that to happen they need to play smart and because of the lack of options Roma have. Some of the players need to rise to the occasion Robin Olsen will be really important for Roma he needs to put in another great showing because Inter Milan have a lot of different options at which they can hurt you it’s not just Marco Icardi but if he slows down Roma might have a shot. From Inter Milan perspective it is inexcusable not to win this game. Emotions will be running high because of this the disciplined team wins the game. 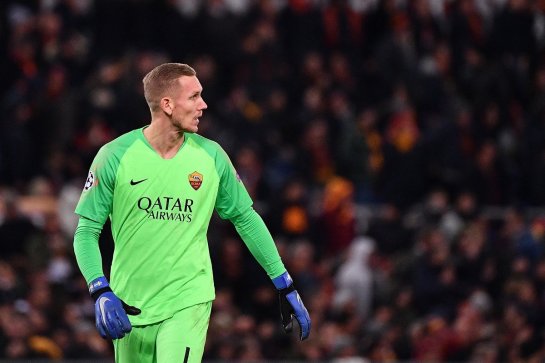 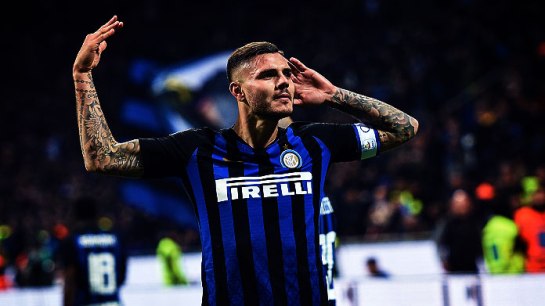