We have seen an emergence of a star in women’s football. From the Norwegian city of Molde a super Talent has been discovered and Unleashed in the world of women’s football. Ada Hegerberg has the world at her fingertips one of the biggest talents we have ever seen in women’s football with the opportunity and the ability to be the best player in history. Still only 23 years old olympique Lyon Striker has collected 10 trophies including Four League titles and three Champions League titles in a row. She is by all accounts the best player in the world and it’s not particularly close. The Norwegian Superstar already has more career goals then Mia Hamm Martha and Abby Wambach. The single most skilled and natural score we’ve ever seen in a woman’s football. She Has been universally regarded as one of the best players in the world the most talented Prospect in the history of the sport. The closest thing we we have seen to Cristiano Ronaldo in women’s football. She is a winner a champion and a leader. Quietly becoming the most dominant player in the game and finally getting some World recognition. Already having been recognized for her ability over the last 3 years ever since she stepped foot in France she has been a world-class player. The Ballon d’Or ceremony took place this last week as we saw Luka Modric beat out Cristiano Ronaldo Mohamed Salah and Leo Messi to his first Ballon d’Or ending the decade of Cristiano Ronaldo and Leo Messi winning the award. Modric won the Champions League with Real Madrid and took a Croatia to an unlikely World Cup final. For the first time ever during the ceremony in Paris they would be recognizing the best woman footballer in the world. The woman’s version of the Ballon d’Or was awarded for the first time. Formerly known as women’s player of the year as much like the men now refer to as the Ballon d’Or Feminem as 3 of the most accomplished and impressive women footballers were recognized in front of the world to see. Ada Hegerberg beat out finalists Danish and Wolfburg striker Pernille Harder & Lyon German teammate Dzsenifer Marozsan to claim the Ballon d’Or as the first winner of the award. Collecting 136 voting points as the Norwegian scoring machines finally getting universally recognized as the world’s best. Hegerberg scored 46 goals in all competitions including 15 goals in the Champions League as she lead Olympic Lyon to a fourth consecutive League title and third straight Champions League. As the Norwegian Superstar was awarded on stage with Luka Modric and Killian Mbappe getting the ultimate individual prize in women’s football. During her acceptance speech she spoke on the fight for women equality in World football. ” To young girls all over the world please believe in yourself” 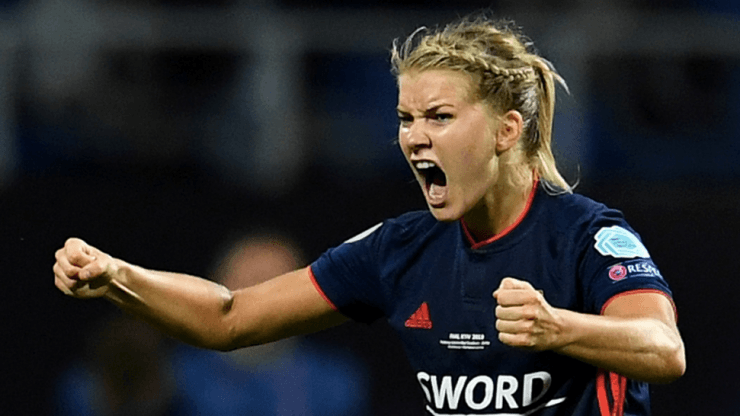 In the game of football sometimes we talk about certain players as just having been gift of natural ability. When we discuss all-time great players like Leo Messi we are amazed by his all-time great talent. Leo Messi is probably the most talented athlete we’ve ever seen if you look at highlight clips of him as a kid and watch him now there’s not really any difference. he could still do the things he does now back then it was given ability the game is completely natural to him to be so small and so effective he has developed himself into one of the greatest players of all time. Ada Hegerberg much like Leo Messi had a natural ability from a very young age. Her game is very Cristiano Ronaldo like because of her assassin’s mentality. From the very beginning of her career she was a superstar as she has developed over the last 10 years into the most dominant Superstar women’s football has ever seen. She developed into the ultimate modern-day footballer from the very start of her career she’s been a natural goal scorer. I’m not saying she doesn’t have to work but when you watch her play it is quite clear she has that natural ability she has dominated at every single level of her football pyramid. It is not even the slightest surprised that she has won the Ballon d’Or she has a rare ability to dominate something that you don’t see a lot of women’s soccer. In comparison to the men’s game there aren’t too many players that have the type of ability she possesses she is almost as entertaining to watch as any women’s athlete in the world. From the very first night she played she was born to be a superstar and has the opportunity and skill to be one of the best players in history. She started her career playing for a youth team in Kolbotn a small Norwegian cities Adda and her sister grew up as kids only a population of 8,000. Both of them were soccer players from a very young age and have the ability to become stars for Norway. She eventually joined the first team that her sister was already on. In 2010 at age 15 she made her professional debut. She spent two seasons at Kolbotn scoring 15 goals in 31 matches a pretty remarkable total for a teenager. At the age of 15 she was a part of the Norwegian team that qualified for the 2011 under-19 European championships. She helped her team get to the final but Germany deny them of the trophy teaching them a lesson in a 8-1 loss. She eventually moved on joining Stabaek a much bigger city in Norway. She only spent one season there but she lit the world on fire. She scored 33 goals in 26 games proving to have the natural ability score. Her next move would be to the Bundesliga in two seasons playing with Turbine she scored 14 goals in 33 appearances in the two seasons. Finally she earned a big move to French champions the most dominant Force in French women’s football Olympic Lyon.

At Lyon she developed into a huge star displaying all the world-class qualities. Prior to her move she was a selected for the Norway team heading for the 2016 World Cup. She was sensational scoring three goals in the group stage before eventually being eliminated by England in the round of 16. She was voted young player of the tournament. In her first season with Lyon she scored 34 goals in 32 games she developed into a scoring machine. Which led her to being acknowledged as the best player in Norway since she has been in France she has scored 175 goals being recognized as the best women’s player in Europe in 2016 and BBC’s woman footballer of the year in 2017. In addition to that she was selected in FIFA World 11 in 2016 a transcendent talent. From a young age she has been just an unbelievable Talent at 20 years old she had 54 goals in a season. She has 275 goals in her career which is more than Mia Hamm Abby Wambach Martha and many others. We have never seen a woman soccer player with such ability there was no question that she was going to win the Ballon d’Or if you look over her career she has been a scoring machine with immense natural ability. I am going to make a crazy Proclamation here I believe she will go down as the greatest player of all time. She has a more versatile skill-set than any player we have ever seen she has come through and big moments having scored in the World Cup and a Two Champions League finals. She has won the French league in four consecutive seasons and won the Champions League in three consecutive Seasons. She has unbelievable range and dominates a game like no other in truth she reminds me a little bit of Cristiano Ronaldo that’s how dominant she is from an offensive perspective. Once she gets the ball she can do practically whatever she wants with it.

The proclamation of greatest player is very attainable based on accomplishments and achievements but Internationally it will be tough. She plays for Norway a good team but probably is never going to win a World Cup so she will never achieve internationally what the other great players in women’s football have but on a individual level I don’t think there’s a single player with more of a dangerous and versatile skill-set who performs in the biggest moments she has 275 goals and she’s not even 25 yet this season alone she’s got 14 goals in 14 games she is a complete and utter scoring machine. Not to mention she has exceptional vision and is unbelievable with the ball at his feet she quite clearly has no flaws. This will go down as the greatest woman soccer player of all time she will not accomplish the same things but in terms of individual achievements it’s going to be really hard for anyone else in women’s soccer to take the Ballon d’Or from her I think she will win this in consecutive years. She has the potential to score well over 500 goals she’s already the single most skilled player ever she is only going to get better and better as the years go on and she will continue to win trophies and deliver success for her Club. If someway somehow she takes Norway to a World Cup final her greatness will be justified because of all the things she can do with her skill-set on leadership and her role in women’s football will not be able to be questioned she’s quite simply the best women’s soccer player I’ve ever seen. The progression we have seen with her is the same one we have seen with the likes of Leo Messi and Cristiano Ronaldo women soccer does not have a more polished Superstar she will dominate this Sport for the next 20 years because she just has everything. She also happens to be the perfect role model for young girls playing soccer in Europe and America. She believes in equality in the sports for women and she is very humble and has the heart and the desire to make a huge difference in the soccer community. Girls from all over the world we’ll look up to her not just because what she has done on the pitch but the impact she can have off it. She wants equality for everyone not just women she is the perfect woman to lead this sport forward. The impact she can have on the lives of young girls goes deeper than football. After being asked to tweak at the Ballon d’Or ceremony she says comments like that will only Inspire her to continue the fight for equality in football. 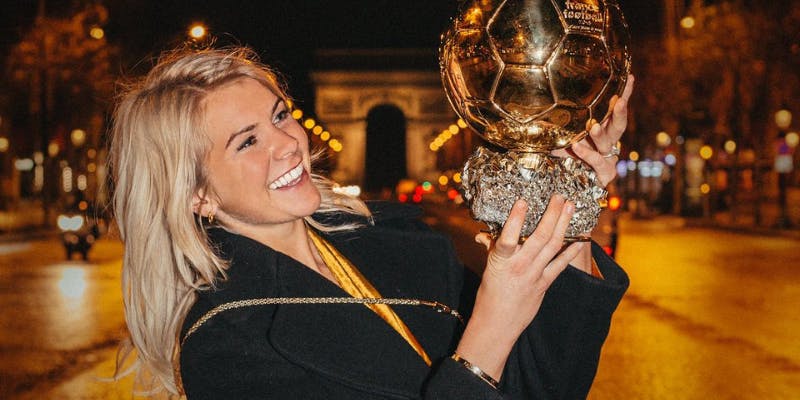