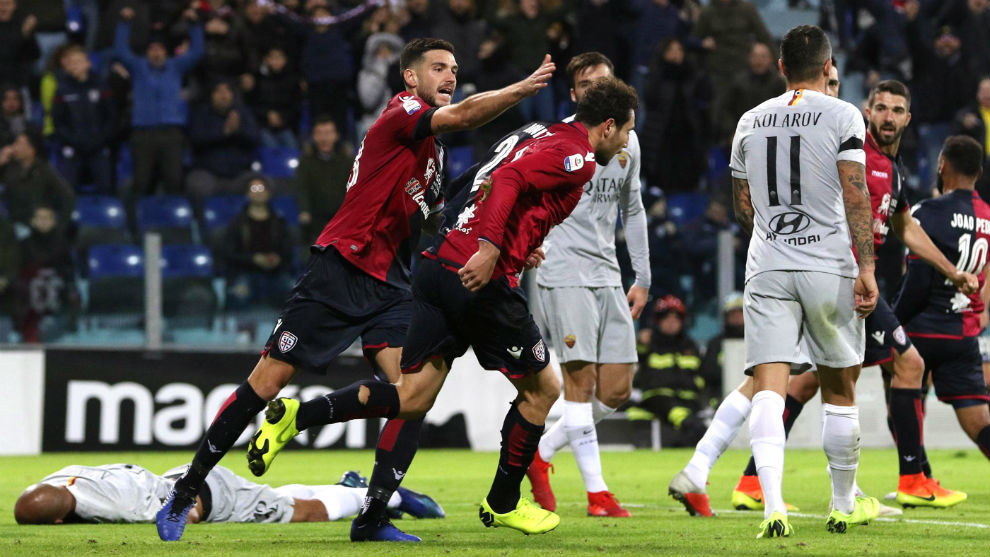 After an inspiring performance in their come-from-behind draw with Inter Milan Roma traveled to Calgary for a clash with a mid-table Cagliari side Roma beat in both meetings last season. It was a horror of a night at least that is the way it ended. Roma put together a splendid first half despite all the injury issues Roma have faced this season they looked really song in the first half. Bryan Cristante showed his continuing development with a strike to give Roma the 1-0 lead. Roma had several opportunities in the first half as they had control despite Cagliari’s occasional moments. Near the end of the first half Roma doubled the lead through a Alex Kolarov free-kick to give Roman a 2-0 lead. In the second half  everything broke down as Cagliari continuously pressurised Roma causing the Romans to sit back and defend much of the second half too many mistakes allowed them back into the game. However with 10 minutes to go Roma still had a 2-0 lead. As of the psychological and mental breakdown occurred. Cagliari got one back off a corner through a goal from Ionita to make it 2-1. Then in stoppage-time Cagliari had two players sent off with red cards. With the last kick of the game Cagliari got on the counter attacks and scored at the death of the match as they stole a victory from Roma in what was an absolutely utterly embarrassing collapse in a 2-2 draw. Pressure now only continues to mount on a job security of Eusebio Di Francesco after a pitiful performance it appears some changes are needed accountability is required after a disaster on Saturday night.

What happened at the end of the game should not have occurred it is an embarrassment. Cagliari had two players sent off 30 seconds before the equalizer. You cannot allow a team with 9 men to go down and score almost immediately. I don’t think you can really fault Robin Olsen but it should have been decided by the team that they were going to kick it out of bounds there was a literally seconds to go before the game was over there is no need to have sent it all the way to Midfield. Had they gone out of bounds Cagliari would have had to reset and the opportunities that they had would not have happened. A true defensive collapse in the moment you just cannot allow that to happen. Roma were winning this game with 5 minutes to go the collapse is completely unacceptable this is a team that should be pushing Champions League they have been unable to deliver on a consistent basis Roma do have injuries but that is not an excuse for what we have saw Saturday night Roma need to take responsibility for their actions DiFrancesco was visibly raged after the disappointing draw Roma must do better they have too many great players to have another night like this was. 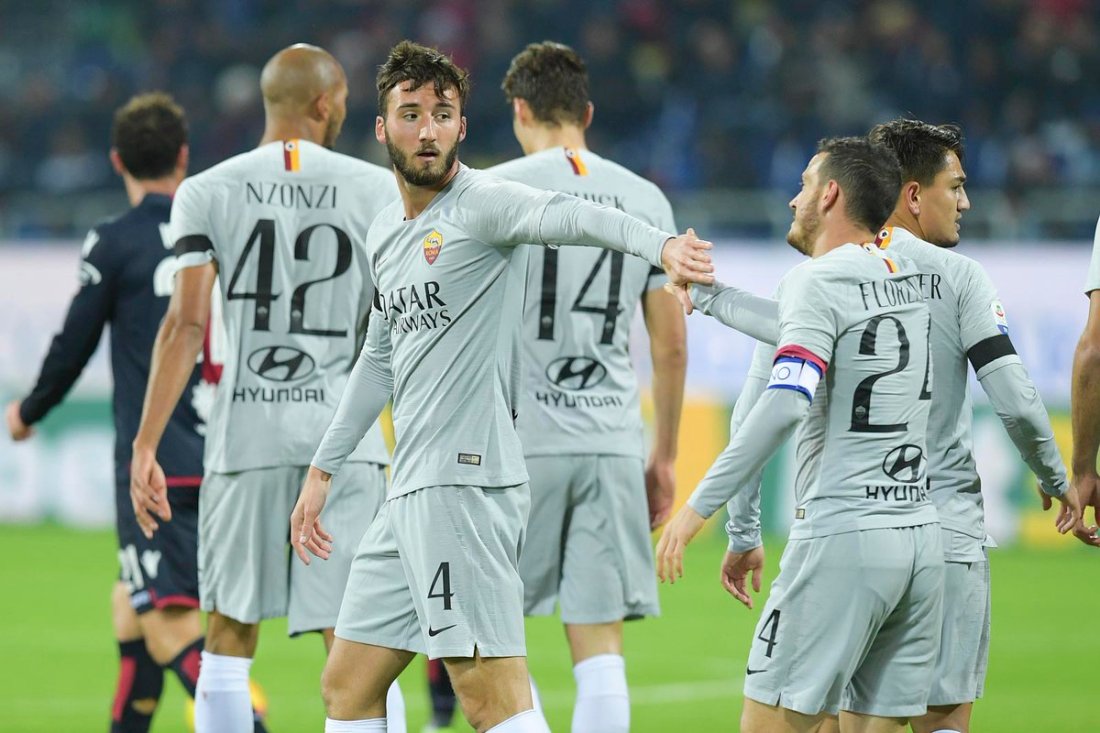 With the injury to Roma Captain Daniele De Rossi Bryan cristante has stepped in and played his role alongside Steven Nzonzi. The high-profile signing from Atalanta failed to deliver during his first few months with the Club but quietly turn that around. Since being put into the starting lineup he has progressed every single week and has shown  tremendous progress. He has the perfect skill set for a Roma midfielder someone we can count on in the years to come. Extremely talented relatively young & incredibly skillful. He has done exceptionally playing alongside Steven Nzonzi in Roma’s defensive Midfield. Not all of the signings Roma brought in this season have panned out but we are finally seeing the potential of Cristante in this formation he has thrived he has been one of Roma’s best players over the last few weeks. Really coming into his own he has played out of his mind showing his unbelievably important to the Roma midfield. The impact of the game in the offense aspect but also defensively he plays such a huge role in the holding Midfield position to try to ignite offense for the Roma. He is exceptionally skilled with his feet and has clinical Finishing ability as we saw on Saturday. A beautifully hit ball scoring his second goal of the season from the start to the finish of the match he was the best player. He has been one of the most consistent performers over this rough stretch. He’s only going to improve as the season goes on he will completely justify the 30 million price tag. he’s  been nothing short of special and he’s going to be a hugely important to Roma this season and beyond. The Perfect Roma Midfielder I believe he is the long-term replacement for the Aging daniele de Rossi learning under an all-time great has only benefited him the season this kid is going to be a superstar he has hit the ground running and I only see it continuing his potential is through in the roof and we are finally seeing it on full display.

Lack of impact from Nicolo Barella

Nicolo Barella is one of the most promising prospects in Italian football. He is being scouted and pursued by several clubs in the Premier League as well as some of the bigger clubs in Italy. He is viewed as a transcendent talent who has thrived playing for his hometown Club. Cagllari ended up getting a come-from-behind draw in dramatic fashion in the end but one of their most important players quite frankly didn’t show up for the game. These were the type of games that can justify a players talent if he’s unable to perform against some of the bigger teams in Italy how is he going to handle the pressure of being a big signing. Barella is extremely talented and we have seen him perform at top-level many times throughout the last few seasons. He is without a doubt one of the best prospects in this league. However yesterday you could not find him he had a little to no impact on the game almost like he was invisible. You kept on waiting and waiting for that moment where he sets the world on fire. It never came he failed to deliver in a hugely important match against a very good team. After an uneventful performance it makes me kind of question the huge price tag that have on him obviously he’s extremely talented but failing to deliver made me question is actual value. He’s probably going to be sold at some point for around 50 million if you are a 50 million player you need to perform against the biggest teams in the biggest games on Sunday Night Football he’s failed his mark and was unable to put in a convincing performance against a inconsistent Roma team. We almost expected him to have a breakout moment in that game but he was mutually ineffective throughout the 90 minutes. I would still willingly pay 60 million for this kid but uneventful performance in a big game is a cause for concern.

The Selling Of Kevin Strootman

After a late collapse it’s underlined some issues what happens beyond the pitch. Some of the things have come down to decisions made in the summer to sign and sell certain players. One move stands out in particular the decision to sell Kevin Strootman to Marseille. Roma have sold players key players in the last 3 Seasons this may be part of the problem how can we progress if we keep getting rid of key components. However with that being said I have supported nearly all that be decisions to sell certain players. Mohammad Salah wanted to leave and the following year Roma had a much better defense. Alisson decided to leave as well but Roma have accommodated the absence at goalkeeper with Robin Olsen who has done tremendously well this season. I was even okay with fan favorite Radja Nainggolan leaving for Inter Milan because Rising Star Nicolo Zaniolo was attached to the deal. For the most part I’ve understood the reasons to sell certain players I’ve been okay with most of the decisions made by the Roma board and personnel. However selling at Kevin Strootman made no sense whatsoever it was a pointless sale. Kevin Strootman had some injury issues occasionally and isn’t as fast as he once was but he still had that mental toughness and intelligence not to mention a great amount of an experience. He may not score a lot of goals and he won’t blow you away on the stat sheet but his impact on the game cannot be questioned. He still would have been a crucial part of the team this season. Selling him after the first game of the season was a mistake and something I believe Roma are paying for he may not have been the most high-profile player but his toughness has been missed he is one of the most hardest working players to have played for Roma. I do like the young talent that Roma have but a player like Kevin Strootman this season would of made a huge difference and I still believe to this day that it was a catastrophic decision made by Monchi Kevin Strootman is a quality player that could have helped this team in more ways than one Roma are paying for his decision and they will continue to do so Saturday collapse was apart an example of that.

Cagliari one of three teams unbeaten at home 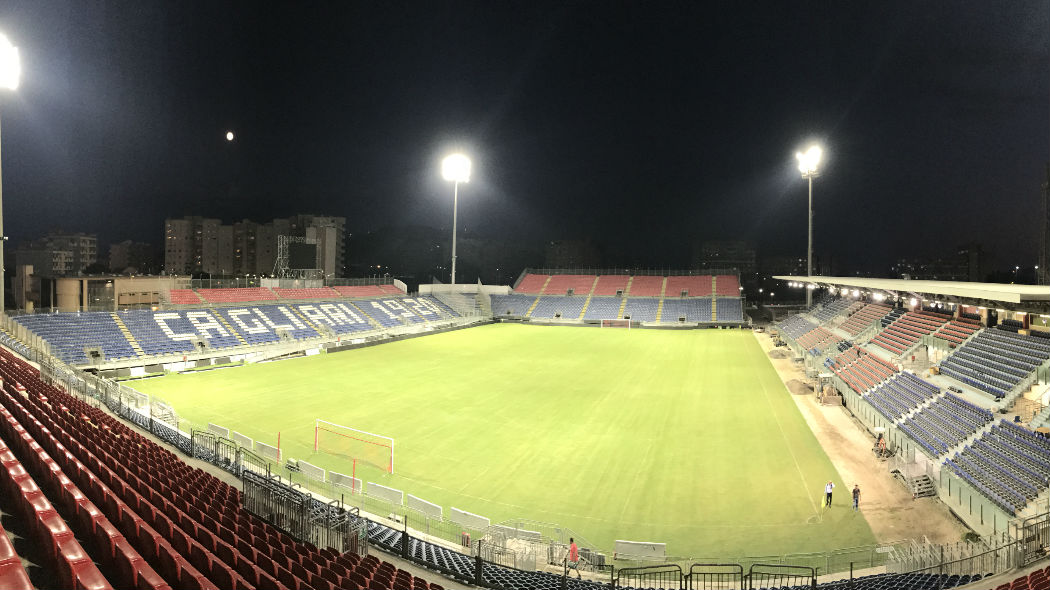 Believe it or not Cagliari is one of only three teams in Serie A to be unbeaten at home. They may be a mid-table side who don’t really have the opportunity or resources to get into a European places but despite that they have joined a very exclusive group. The only other two teams who have not lost at home this season is Napoli and Juventus. Cagliari is in a great team there are a very underrated team that have quality in the side but no one considers them a team that should be feared. The reason they have so much success at home is there atmosphere it is absolutely electric. Playing in that city in front of those fans must be so intimidating. Throughout the entire match you could hear the supporters chanting whistling and making noises to disrupt the rhythm. Eventually they will lose a game at home it’s only inevitable but their atmosphere and their fans is is antagonizing on the opposition they causes so much chaos with their supporters it is a large reason why they have been so successful at home. Not a lot of wins but they’re not losing games in their own backyard.