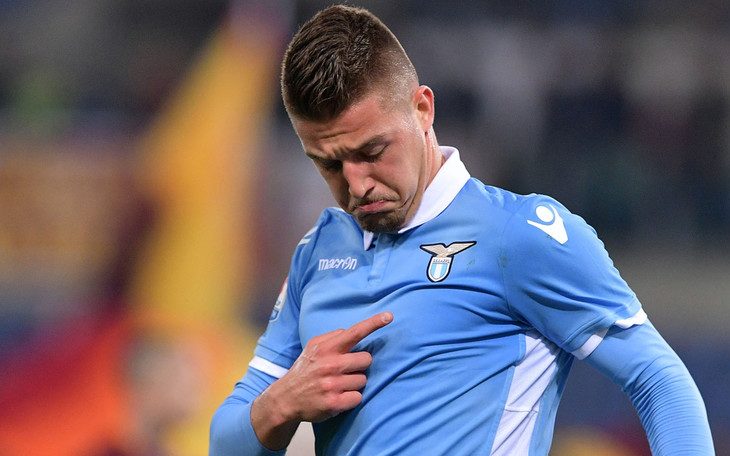 Lazio have been in a rut over the last few weeks picking up a very minimum amount of points. That all changed this week as the Milinkovic-Savic we saw last year returned. Milinkovic-Savic had a breakthrough year last season developing himself  as one of the top players in the league. This summer is transfer value skyrocketed with the likes of Real Madrid and Juventus very interested in the Serbian whose value stood at 150 million. He has been a major disappointment this season but has finally found his way back with a superb goal that insured Lazio 3 points over the weekend. It was their first win in over a month as they have struggled to maintain consistency this season just like their Rivals from down the road. With consistent points being dropped by AC Milan Lazio have an opportunity to start gaining some ground on their champions league position. Milinkovic Savic certainly has the potential to elevate this team above and beyond what we are currently seeing from a incredibly disappointing Lazio team domestically and in Europe. If he can find a way to recap his glories all a season this could be a very dangerous team. Consistency is the word here he has not had consistency this season and we need to see him put in more performances like this more often but over the last week he has shown the quality he quite clearly has but the question remains will he be able to maintain it. He’s gone through some of the slump this season but if he can put in consistent performances like this Lazio all the sudden can look incredibly strong once again. The transfer market value has deflated after a disappointing start to the season if he can keep this up he could be in the team of the season Once Again a superb performance but consistency will be needed if Lazio and Milinkovic-Savic are able to retain the success from last season. A truly dominating performance from the Serbian Hitman.

In a very surprising couple of weeks for Chievo Verona they land themselves on my top three performance of the week. While Verona still find themselves at the bottom of the table with five points they have made up some significant ground over the last few weeks. This team was looking like one of the worst Italian football sides we have seen in recent years not too long ago. It took it took them months to even get to zero points after a financial scandal that gave them Point deduction. Italian football joker Ventura took over and evidently made things a lot worse. However over the last 5 weeks they had picked up a point in each match. While they still have some significant ground to make up they have got some very valuable points against some top teams. Earlier just a few weeks back they got a draw with Napoli and this week they just got another one with Inter Milan thanks to Pallister who scored a stoppage-time goal to ensure points. This season they have taken points from Roma Napoli and Inter Milan. While the chance of survival is pretty minimal they’re going in the right direction 19th Place is only three points away and even though chievo Verona is without a victory this season after failing to pick up points at the majority of the year they have picked up some points in the last month. It puts them within Striking Distance of survival. It is a long season and have a long way to go but I can’t ignore this any longer as bad as they have looked at the beginning of the season since their change of manager they are playing a better football and getting points they would never have gotten earlier in the season. Inter Milan has Superstars all over the place and Verona managed a draw as a low-key this might sound it was a huge result for their chance to survive this season. They have an opportunity to do that because one of the things they have struggled with this season’s is points and in the last 5 weeks that takes on they have gotten points every single game once they start putting together some victories it will make a real chance at survival. A multiple winner of Donkey of the week have found themselves as one of the top performers as chievo Verona start to pick up momentum.

Mario Mandzukic lives for the big moments in a hugely important game Roma was a team that was coming from a come-from-behind victory he delivered for Juventus in a match they didn’t play particularly well. He was extraordinary and was the big reason how Juventus was able to secure the three points. Juventus completely dominated the first half of play as Roma only had a few chances occasionally to break through. Roma were unable to take advantage of the few chances they had. A near-perfect opening 45 minutes from Mario Mandzukic and Juventus. At the very end the first half Mario Mandzukic took advantage of an opportunity as he has done consistently this season. Using his size and athleticism he put his head through a cross at the ball ended up in the back of the net that gave Juventus 1-0 lead after the first half. He was a nightmare to deal with Roma defense playing exceptionally well but the size and power of Mandzukic proved to be a serious problem. Only Federico Fazio really matched up with the Croatian Hitman as Mandzukic is much bigger than the majority of the Roma back line. Juventus has had their hottest start in a decade and although Cristiano Ronaldo will steal the headlines it could not have been possible without Mario Mandzukic. He has been an absolute sensation throughout the season coming off a terrific World Cup for Croatia as he was a big part of making the final. Yet again he is recognized not only for making an impact but in the biggest games. He has now scored against Milan inter Napoli and Roma. In the biggest games he has delivered and we saw that again last night. Roma play incredibly tough but Mario Mandzukic in a moment of brilliance became Roma’s downfall. That wasn’t only because he scored a goal but he created problems throughout the match he always seems to turn up in the biggest games despite being 32 years old he is as good as he’s ever been in the Juventus shirt as he scores another crucial game-winning goal against a worthy opponent.

DONKEY OF THE WEEK: Radja Nainggolan

The donkey of the week this week goes to Radja Nainggolan. After leaving the Eternal City of Rome this summer and what was at the time a controversial to transfer for the Belgian midfielder has not worked and has looked like a mistake. Roma pulled the trigger as they pushed out the talented midfielder after 5 years spent in Rome. Apart of the of the transfer was Inter Milan’s then a young Prospect Nicolo Zaniolo who has proved to be the Real Deals in the Roma Midfield and he has flourished for Roma. Radja Nainggolan despite having a few goals this season as a drastically underperformed and this week has off-field issues have caught up with them. According to reports under new management Inter Milan’s a new chief of staff has a suspended Radja Nainggolan and have given him $100,000 fine for misconduct. According to reports the thirty-year-old was late for practice. He will now miss one of the biggest matches of the season as  second-place Napoli battle Inter Milan at the San Siro. He has ultimately cost his team in a game where he was much needed. There has now been rumors and speculations of a potential departure in January come to surface. Nainggolan has been in this game a long time he knows better. His off-field issues is the reason Roma decided to sell him now looking back it appears Inter Milan have made a mistake. He was a superstar in Rome not only has he digressed but the off-field issues has come up yet again. His lack of work ethic and professionalism may have cost his place in Inter Milan’s team a departure sound seems imminent this is not the first time it has been an issue he had the backing of the manager and he completely let down his teammates. He should be ashamed and how he conducted himself the new chief of staff is not going to put up with this very much longer as he earns the donkey of the week with his behavior