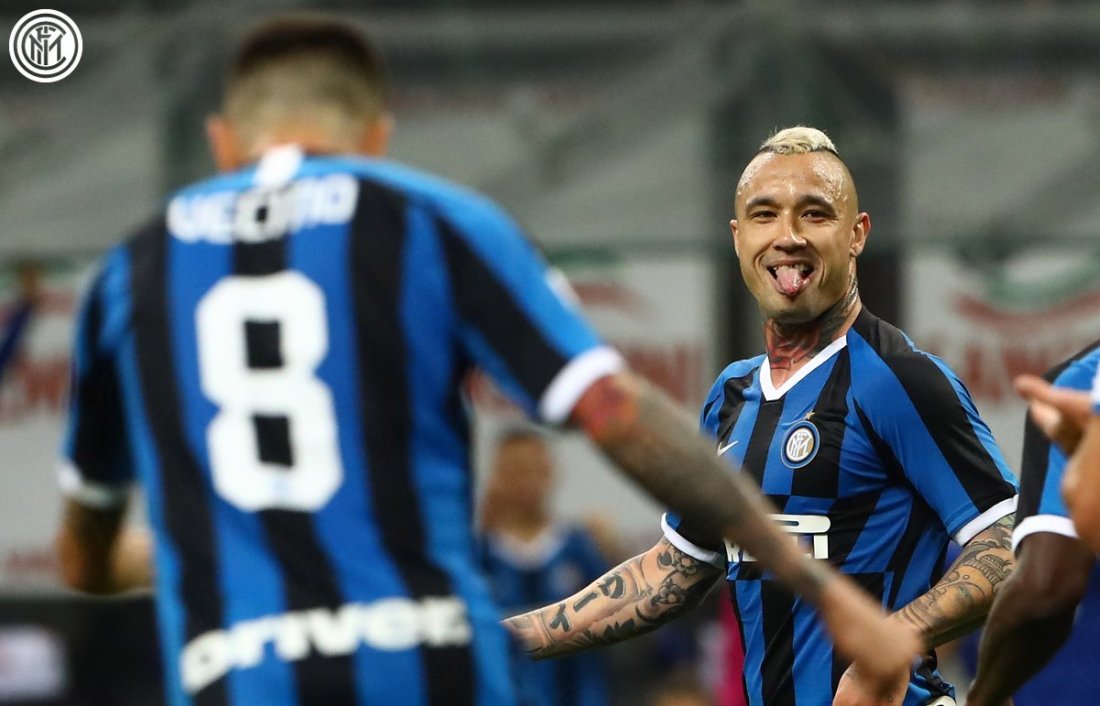 Radja Nainggolan has been criticized for his play for a good portion of the season. He was attached to the transfer that sent Roma Rising Star and reigning Serie A young player the season Nicolo Zaniolo to Roma. It is abundantly clear that Roma won the deal. Nicolo Zaniolo has been at the breakout star in Italian football. Meanwhile, Radja Nainggolan has had an up-and-down season as he seems to have lacked that consistency he has had the previous five seasons. He doesn’t seem to be the same player but nonetheless after a rough start the second half of the Season he really came on and started to show flashes of brilliance. He became the unlikely hero of Inter Milan’s season. Even though he did not have a particularly great season he came through in the biggest moment of the entire year. The final game of the season had so many implications with Atalanta, AC Milan, and Roma all fighting for Champions League football. These places flipped in the table throughout the final 90 minutes of Italian football this season. Inter Milan faced a very willing Empoli side who was fighting for their life. In fact, I’m not sure they got what they deserved. Nonetheless with less than 20 minutes to go Empoli equalized. Inter Milan for the time being fell out of Champions League and found themselves in 5th. If the results stayed they would be heading to the Europa League after being in a Champions League places for as long as they had. Time was running out on their season. Then the moment arrived Radja Nainggolan scored a game-winning goal with less than 10 minutes to go on the season scoring the goal to qualify them for the Champions League. He may not have been the best player on the day but he made the biggest impact without him they would have thrown away Champions League football. It has not been a great season for him but with everything on the line, he delivered during Inter Milan’s most dire moments finding himself as one of the top performers of the week given his impact the final results of the season. Came through when Inter Milan needed him the most to some extent erases some of the negativity he has been attached to him he is the reason that Inter Milan will be in the Champions League next season.

The feel-good story of the season has reached its completion. Against all the odds Atalanta has made Champions League football for the first time in club history. Not only that they secured a top-three finish. They finished ahead of Inter Milan AC Milan and the Roma an astounding accomplishment. Atalanta needed three points to qualify for Champions League anything less than that they would have missed out. Things started out rather ingloriously as a Sassuolo scored an early goal to get things started on the wrong foot. Duvan Zapata my player of the season scored the equalizer to make it 1-1 but that would not be enough Atalanta needed three points to pull it off. Atalanta Captain Papu Gomez was the difference. He returns to the list only the second time this season after being a knowledge during the first week of the season. The second half of this game belonged to him. He was going to do whatever takes to qualify them for Champions League and that’s exactly what happened. Papu Gomez has scored a crucial 2nd half goal and assisted another in what was an eventual 3-1 victory as Atalanta did the absolute impossible qualifying for the Champions League which going into the season was well above their goals and expectations they lived a season of Dreams. Whether or not this team will break up or how they will fair in Champions League at this point is irrelevant they did something that no one expected them to. There’s no other person to take them there then their leader Papu Gomez who has refused to leave the club for greener pastures on an almost regular basis. He has refused to let go of Atalanta which now looks like one of the smartest decisions he has made after leading his Club to the promised land of Champions League football being responsible for two of the three goals showed his importance. He may have had a somewhat disappointing season but when the chips were down and the team needed a leader he delivered for his team as they accomplish something unprecedented in Italian a third-place finish this club will remember forever.

Bologna by a huge shock ended up finishing in the top 10 this season. For much of the year they were one of the worst teams in the league and it looked like they were only destined for relegation. The entire fortunes of the season changed when Milinkovic took over and guided the ship away from relegation not only to avoid it but to secure a top-10 finish which is truly remarkable given where they found themselves when he took over. They were hovering in the relegation Zone and they escaped it. On the final matchday of the season, they took on Napoli. A team that had a recently blown Inter Milan to pieces. Neither team really had anything to play for particularly but both showed up in what was a thrilling game. The difference? Federico Santander, he has had a fairly decent campaign nothing to be blown away by but very productive nonetheless. He was a big reason bologna ran out to a 2-0 lead in the first half. Scoring once and assisting another. Essentially being fully responsible for the opening two goals of the match. However this was Napoli, the team from Naples fought back equalizing after being down 2-0. Then just a minutes before the end bologna struck for the final time as Federico Santander scored the winner in what was an unbelievable performance as Bologna held on to win 3-2 a great way to end the campaign. He was the most important factor scoring twice and assisting another as he was somewhat responsible in all three goals. This team was already safe from relegation but a performance like that was the biggest reason they managed a top-10 finish this season. After the progression that has been seen, I’m not sure this is the relegation team anymore. A performance like this of true character shows how far they have come. As we recognize Federico Santander for a marvelous display on at the final match day of the season.

The donkey of the week in this final week goes to Chievo Verona and Frosinone. They played out a 0-0 draw in the final matchday of the year it may have been a completely meaningless game but the match itself highlighted that without question these teams deserved relegation. Chievo Verona finished with 17 points one of the worst sides we have ever seen in Italian football. Meanwhile, Frosinone was still at a very miserable 25 points. The other team that was relegated Empoli secured 38 points just narrowly missing out on safety. The difference in points shows how bad Chievo Verona and Frosinone had been this season. They had been an absolute utter disaster. I think both teams will find it very difficult to come back anytime soon. It was a nightmare from the very beginning for the both of them they had so much difficulty just picking up points whatsoever. There have been teams who have underperformed but without question this week the donkey of the week goes to two of the worst teams that we have seen in recent memory. They lacked everything teams that are going to survive needed. They made bad decisions early in the season and in the summer they have earned and deserved their demise. Could they have avoided their situations are they make smarter decisions it’s hard to say but they were doomed from the very start. Chievo Verona stayed in the league for 11 seasons and that deserves a lot of recognition and they have my respect. But everything must come to an end. As for Frosinone name they literally put themselves in this position. Both teams absolutely deserved relegation and that’s exactly what they got.

NAPLES, ITALY – JANUARY 28: Dries Mertens of SSC Napoli celebrates after scoring the 2-1 goal during the serie A match between SSC Napoli and Bologna FC at Stadio San Paolo on January 28, 2018 in Naples, Italy. (Photo by Francesco Pecoraro/Getty Images)