Just a few weeks ago, Roman hero, Kostas Manolas headed for the exit door. Roma is desperately trying to build a squad under new manager so they can get them back into the Champions League. Roma has secured new signings so far to try to make their team stronger. Pau Lopez the Real Betis goalkeeper is a Roma player after his medical took place earlier today. However, Roma has been dealt a blow with another departure. Roma’s best player from last season Stephan El Shaarawy a few months ago it looked like he was going to sign a new contract with the club that would include an extension as well as a pay raise. However, a lot of things have transpired over the last few months and it seems that talks have broken down in regards to a new contract. In a very strange move. Both from Roma’s perspective and the respective Suitor of Stephan El Shaarawy it seems that the talented winger will flee to Asia. The Chinese Super League seems to be the next destination for the once-promising Superstar. It had looked like El Shaarawy was going to reject the moves after they came in with an initial offer that was rejected and at the time it didn’t look like El Shaarawy was interested in leaving Roma. However, the Chinese side came through with another offer that Roma accepted. El Shaarawy had agreed on personal terms and flew to the east this morning as he will complete a deal that will see him make 13 million euros this season. On a transfer fee that was only 18 million. In what seems like a very strange deal from both sides as Roma well know that he is worth twice that value, then, on the other hand, El Shaarawy made the move considering his age coming off his best year in the Roma shirt. A move that quite honestly very puzzling and hard to figure out how this occurred. El Shaarawy scored 40 goals in 132 appearances for Roma in 3 1/2 Seasons with the club. He will be fondly remembered by supporters as he was one of my favorite players to wear the shirt. He rejuvenated his career at the Stadio Olimpico especially coming off his best season. A deal that supplies great confusion but nonetheless he’s a player that was proud to wear the shirts and regardless of the potential he could have been it was an honor to have them at the club there are moments that we will never forget even though this I don’t think he was a club Legend he was a solid player during his time here. This is a hard pill to swallow as Roma lose another key player this summer.

Stephan El Shaarawy when he arrived at Roma was described as a wasted Talent. The young Italian burst onto the scene at AC Milan but never really lived up to the expectations that were put on his shoulders. After a 19 goal season injury issues and lack of consistency ultimately led to his exit from AC Milan. He was sent on loan to Monaco in the 2015 – 2016 season. It was trial by fire a miserable performance he failed to score a League goal in 15 appearances. His loan was eventually was canceled before he was brought to Rome by Luciano Spalletti in the January of that season. Luciano Spalletti had returned to Roma to try to guide the team back into a Champions League spot or at least push it. He saw Stephan El Shaarawy as a perfect solution giving Roma another dimension offensively. He had the opportunity to rejuvenate his career he hit the ground running at Roma. He scored an insane scissor kick on his debut. Roma found the missing piece as they started to Marched up the table towards the Champions League. In 16 appearances he scored eight goals for Roma proving to be a very vital part of a team that eventually finished in third place. Without even thinking about it Roma activated the purchase option on his contract buying him on a permanent basis. The 2016-2017 season El Shaarawy’s First full season in Roma it was special. He was a part of a potent attack that featured Diego Perotti Mohamed Salah and Golden Boot winner Edin Dzeko. Collectively combined for 90 goals in Serie the second highest scoring team in the league only to Sarri’s Napoli. In all competitions, Roma totaled an astounding 124 goals a club record. El Shaarawy contributed 12 goal season he was a big part of their run in the Coppa Italia. It was the greatest attack in the history of the club. Unfortunately, Roma lost to Lyon in the round of 16 of the Europa League and lost Coppa Italia semi-final to arch-rivals Lazio. Roma did earn 87 points which were the largest amount in their Club history Four Points short of the title. Despite all that it was a very productive season for El Shaarawy and the rest of his team. The Following season Mohamed Salah left for Liverpool. It was certainly a detriment to the club the Following season despite that Roma had their greatest run in Europe in almost thirty years. Roma won the group of death in the Champions League that featured Chelsea and Atletico Madrid. In their second match against Chelsea at the Stadio Olimpico Stephan El Shaarawy scored one of the fastest goals in the history of the competition 48 seconds is all it took for him to Rocket a thunder strike in the roof of the net he scored two goals in that game and proved to be incredibly crucial. Roma went on to take down Shakhtar Donetsk in the round of 16 that was followed by a historic comeback against Barcelona Manolas scoring a winner that took them on the verge of the final. They went out to Liverpool in the semi-final despite a fight back. El Shaarawy finishes the season with nine goals it was a very productive season for him. This last season El Shaarawy was Roma’s best player scoring 11 goals in Serie A. Had it not been for injury concerns he would have scored about 20 goals he was one of the best 11 in the league last season a truly eye-opening performance justifying the claim that he is truly one of the most underrated players in Italian football. It certainly was a season to remember for Stephan El Shaarawy. All the good things come to an end though it was a goodbye I don’t think anyone wanted to see but nonetheless, 40 goals aren’t bad at all even though we cannot qualify him as a legend he’s certainly made an impact during his time in the internal City. 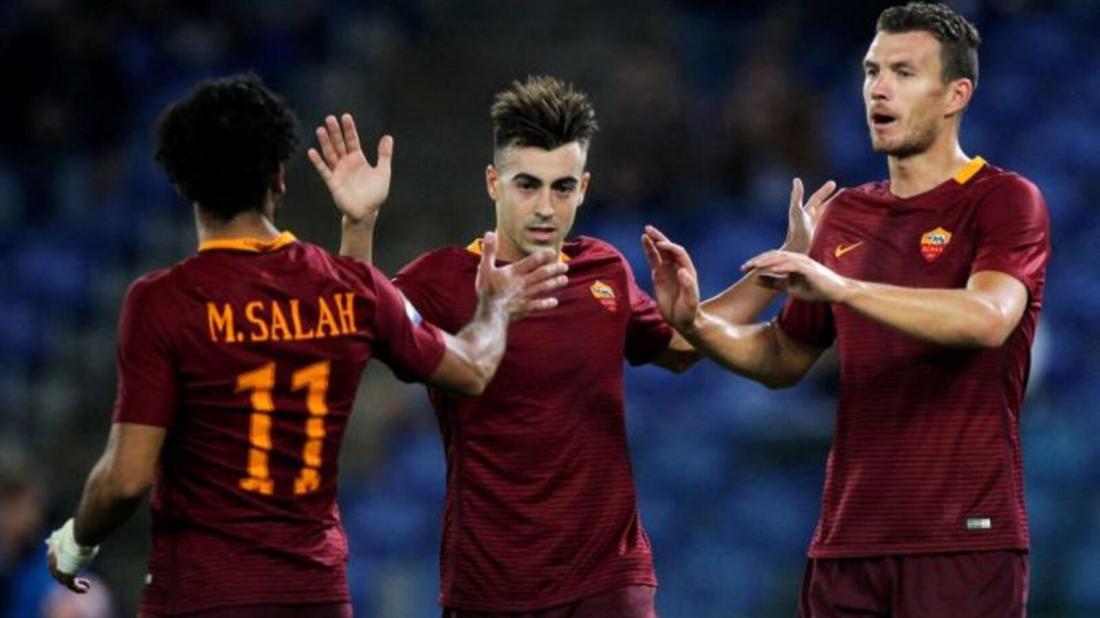 Financially it was not necessary to sell Stephan El Shaarawy. Even from the football point of view, this is hard to figure out. This entire situation has been a bit strange business-wise this was a catastrophic mistake. I am finding it very difficult to figure what is going on with this. I can try to break this down but in my mind, nothing about this makes much of any sense. Last season Stephan El Shaarawy was one of the best players at his position and one of the best players in the league. I gave him player of the season after a tremendous campaign in which he scored 11 goals in the league and that’s not mentioning the fact that he spent a fair amount of time injured had he stayed healthy for the majority of the season maybe he could have doubled his goal total. If you decide to sell him you decide to sell, it was the amount has me absolutely dumbfounded as well as a location. The Talented Roma Winger heading to China which is strange enough. But to let him go for 18 million makes little to no sense. He is coming off a campaign in which he scored 11 goals in the league. He’s only 27 years old he’s leaving for half his value. I cannot describe the anger that I feel El Shaarawy was Roma second highest goal scorer last year. He is probably worth about 35 million in the market. They let him go for 18. 18 million has how much it typically cost for unproven talent. A more or less consistent player can’t be sold for less than 30 million. In any other situation, they would not be a player of El Shaarawy stat line I couldn’t go that low of a price. Here’s the other issue Edin Dzeko it’s probably gone and El Shaarawy is gone. Who on Earth is going to score the goals? If Roma gets rid of both of them we could have a serious problem on our hands. While there are people out there in which they can replace them with it’s not that easy. Yacine Brahimi from Porto seems like a likely replacement for El Shaarawy he is capable of doing that role but at the same time, he hasn’t played one minute of Italian football. I believe the infrastructure the manager and sporting director that Roma as they are good enough to finish in the Champions League the Europa League at the very least. However, this makes things very complicated. The only positive I can take from this deal is that Genghis under and Justin kluivert may have the opportunity to play together on the wings which could be incredibly dangerous given the use and speed in their legs. However, outside of that, this is an absolute disaster. The price of this makes no sense on the second hand I’m a little disappointed in Stephan El Shaarawy I thought he was too good for China just a week ago so did he had a sudden change of heart as the Chinese Club came in for a second offer. Even if he wasn’t going to stay at Roma you would have thought that he would prefer to playing for a team in Europe This is just strange in all aspects. Despite everything considered he was one of my favorite players put on the Roma Jersey. Almost from the moment he arrived, he is someone I admired as a player and a person. At the time because of his rise as a youngster, I thought he was a level above Roma. He has not fulfilled his potential and you could call him a wasted talent but nonetheless, he did some remarkable things for Roma in his time here. Obviously, the two-goal performance in the Champions League against Chelsea is something he will be remembered for. However, besides that, he had several games in which he scored multiple goals. The games he played against Cheivo Verona to me stick out. He always found a way to terrorize them. His movement its speed and his uncanny ability and intelligence the way he operated without the ball as I said for years is better than anyone in football. A strange deal as I believe he left a few years too soon. thank you for the Memories.