Hellas Verona finished bottom of the table 2 years ago before they were relegated to Serie B. It didn’t take them very long to make it back to Italy’s top-flight. Winning promotions through the Serie B playoffs. After seeing their Rivals Chievo Verona have one of the worst seasons ever seen in Italian football Hellas Verona looks to Relish in the opportunity and then return to the Serie A. However with all that being said I think their stay will be very limited and are destined to return to Italy second division. I talked about this all the time when you are a team that is going to be in a relegation battle there are certain Necessities required to pull it off. If you lack in those areas it is going to be incredibly difficult to maintain your spot in Italian football. A creative midfielder a respectable defense and a striker that can get you a 10 to 12 goals. Defensively they were below average against Serie B attackers scoring only three more goals and they had conceded last season. As they conceded 46 goals in 42 games. That is going to be a big problem for this upcoming campaign and if they can’t stop teams they’re going to have to rely on the attack to get things done for them. I like some of the pieces they have in the Midfield with the Darko Lazović who was with Genoa for many years. As well as their young South Korean midfielder Lee Seung-woo who I think can have a very productive campaign. However, I think they’re going to struggle from the very beginning of the season and will have issues maintaining consistency in regards to stopping people it’s going to be difficult. The attacks they saw last year is nothing compared to what they’re going to have to endure this season. If they are going to survive they’re going to need to steal points from some of the bigger teams defensively I don’t see them being able to do that. I don’t think they will be as bad as Chievo Verona last season because they were historically bad one of the worst teams ever seen in Italian football. Hellas Verona is better than that but I see them having significant problems early and not going away for the majority of the season. They’re striking options aren’t very good their leading goal scorer is 35 years old and despite scoring 23 goals 2 years ago and 13 goals last year the number of goals scored by Giampaolo Pazzini will shrink. In his prime, he was fantastic having scored a large sum of goals in Italian football. However, the transition to Serie B will be a difficult one the goals he will score will shrink significantly. He is their best option and if he has a poor season they will stand no chance of surviving in what will be a frustrating and tough campaign to deal with. Their coach isn’t someone who’s going to change life either I’d be surprised if he makes It through the season they will finish bottom of the league next season.

What Mikhailovich did with this bologna team last year was incredible. This was a team that every one a mentally had already relegated when he took over. It seemed like there was no chance at all of survival. He took them on a historical run taking them to 10th Place securing a top-10 finish. This was unprecedented and not a soul saw it coming. I’m not saying it was a fluke because Mikhailovich deserves an enormous amount of credit for what he achieved with this team last season but let’s be honest it’s not happening again. For this team to stand a chance they needed a striker that can give them at least 10 goals a season. They have failed to bring in much of anything and I believe they will struggle very early. It will be difficult to maintain what this team accomplished last year. Mihailovich is one of the best managers in Italy there’s no disputing that but the job that he has in front of him maybe just too much for his qualities to overcome. Riccardo Orsolini is an incredibly gifted young forward who may have a breakout season the question remains will it be enough. It is really hard to say that’s my problem you can definitively say that this team has enough Firepower to perform well enough to maintain their place in Italian football. They got some good players that are capable of scoring goals Federico Santander and Nicola Sansone are all capable of scoring goals. I believe that they do not have enough within the squad to overcome the challenges that will lie ahead. Everyone was taken by surprise by the way the team performs late in the season teams will start to figure out Mikhailovich and the way he plays football once they figure out his strategy they will have the ability to neutralize it. He does not have the players required to survive the season. It is very difficult and I don’t think it’s a big gap between 19th and 16th. I just feel others teams have better scoring options those you can rely on a more regular basis. That’s not to mention their best player Erick Pulgar has made the move to Florentina can they coexist without him I’m not so sure. They certainly can but without that figure in the Midfield the strikers and attackers will not be given the chances they had last season defensively they have issues as well overall they just in my viewpoints don’t seem to have enough that would be needed to survive. I think it will be a toss-up battle but I think they come up short in 19th. 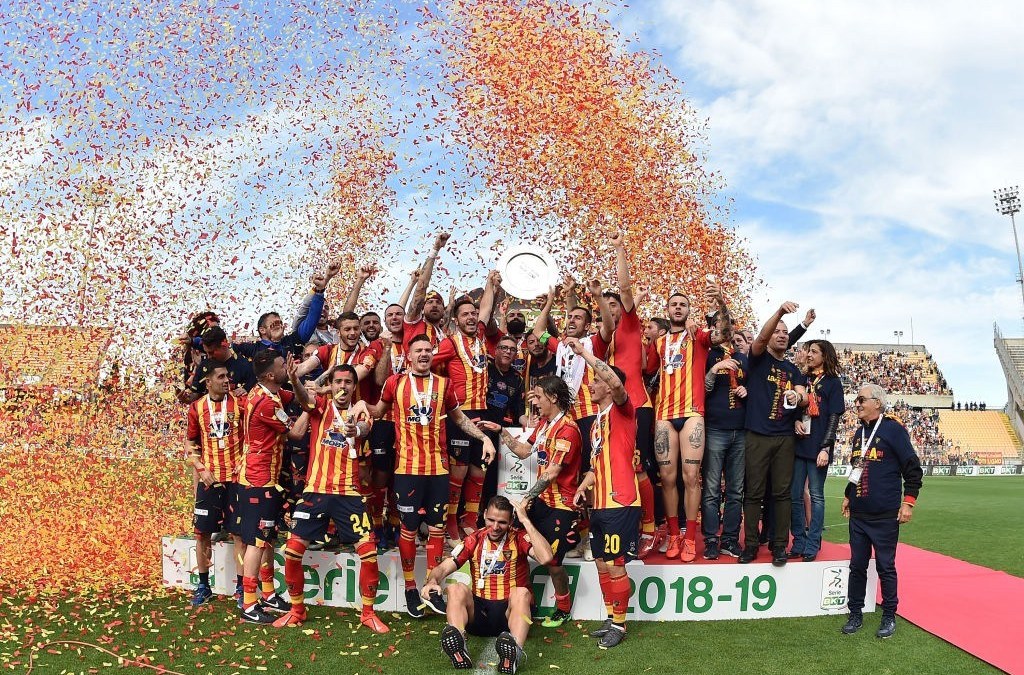 It will be an absolute battle in the next several spots. It is really difficult because I think Brescia are going to drastically underperform this season and could find themselves in this spot it should be a dogfight to survival but unfortunately I have Lecce in the final relegation spot. Only by the skin of their teeth though. They finished second in Serie B last season just one point less than Brescia. An argument can be made that through the season they were the better team in Italy second division. It is a complex situation because Lecce has goal-scorers capable of putting together enough goals to keep them upright in the league. They spent the limited budget they had on defensive reinforcements. They’re going about this the right way everything they have put together could be enough for survival. However, there are just too many uncertainties. We could see a promising attack of Marco Mancosu Andrea La Mantia Fillpo Falco as well as Gianluca Lapadula they are capable of scoring goals and they have dealt with defensive issues at least they’re attempting to. However, my concern is that their top goal scorers from Serie B last season the goals that they scored will not translate to Italian football we’ve seen players that really light it up in Serie B fail to make that sort of impact against the bigger teams. That’s not to mention Brescia have a young star in the Midfield Lecce have done well enough this summer to sustain their position an Italian football. It will be a tough battle and I think it will be neck-and-neck between themselves and Brescia but in the end even though I know what I can get from some of their squad even though they have some issues in the Midfield and even defensively it’s still a concern I think they will fall just short as they will make a return to Serie B. There are enough proven players within it that tell me that they can do enough to outlast this season however despite all that the Mario Balotelli signing for Brescia confirms relegation for Lecce.