The MLS is not a league that I typically pay attention to or am aware of in most seasons. However with that being said the league itself has made terrific strides towards excellence. The expectation is not to reach the level of a European league but to grow gradually through each of its seasons. We have been treated to a fantastic season breaking records incredible atmospheres and dramatic moments in the playoffs. We are approaching the conclusion of the Season as we prepare for the MLS Cup final. As we see a very familiar match up yet again. Heavy favorites LAFC Atlanta United and New York City Football Club all have fallen as we see an underdog Trail between two teams that know each other quite well. It is for the third time in 4 years its Seattle Sounders vs Toronto FC. Both of these teams have won a final against each other a match like this this coming Sunday will show everyone who is the superior team. During both years they ended up in the final they were favorites this time they both had an underdog Journey that led them into the final on the same pitch as each other yet again. CenturyLink Field will be the setting for this much-anticipated matchup. Seattle and Toronto throw down with everything on the line. Will Seattle’s atmosphere be too difficult to handle or will Toronto FC find a way to win The elusive trophy in hostile territory. We will find out all that and more on Sunday night as a champion will be crowned. 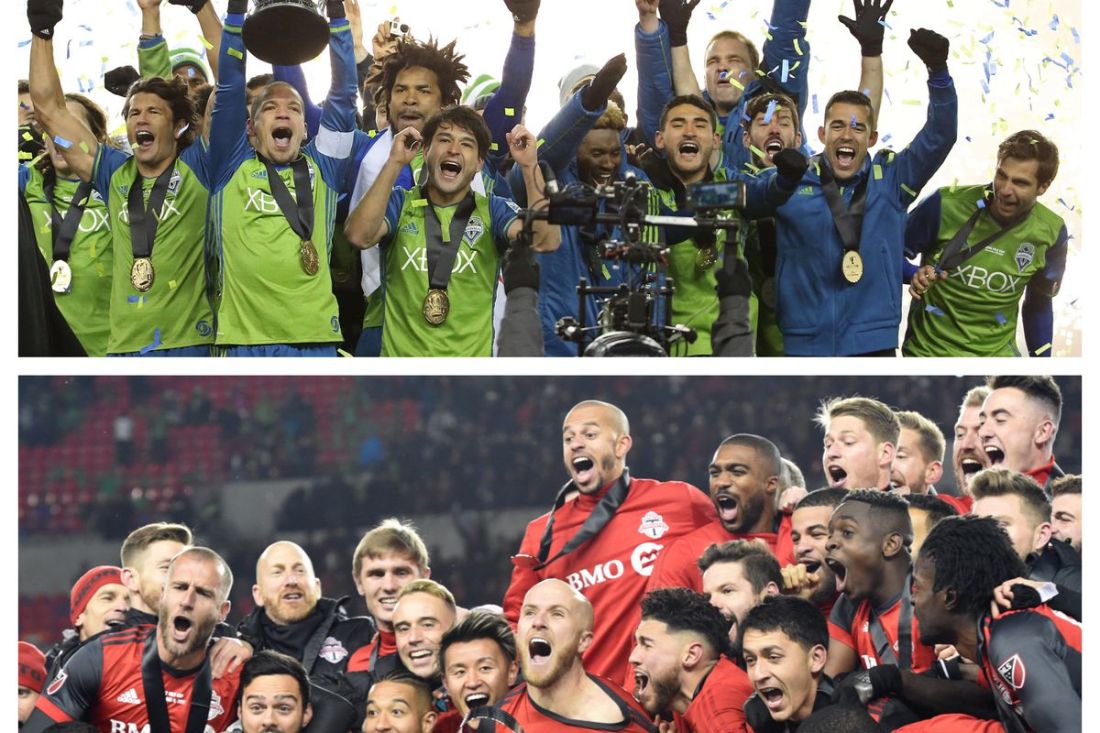 The Seattle Sounders historically have been one of the better teams in the MLS. Since they fired their previous manager they have made the MLS Cup final three times with the opportunity on Sunday night to take the throne that belongs to them. They have earned home field advantage as they will get to play this match in their own back Garden which could be a big difference maker. The Seattle Sounders have a fourth best record in the entire MLS last season and where the second best team in the Western Conference. The Sounders posted a record of 16-10-8 this season even though they’ve had a very impressive campaign there are still cracks in the foundation having only scored at two more goals and they have conceded. This team was largely led by Jordan Morris and Raúl Ruidíaz as a tandem they scored 27 of Seattle’s 51 goals this season. They are heavily reliant on those two stars but they are just that good. Jordan Morris coming off an ACL came back and put together a terrific season. They have everything going for them in this match as Seattle are the favorites to take home the trophy. It is  something they are capable of doing as they have delivered on the biggest stages. This last season they won the casadina cup and the Heritage cup as they beat both of the arrivals San Jose Earthquakes and the Vancouver Whitecaps. This notion proves their ability to deliver against tough opposition. Rivalry games are always intensified and in those moments they have been able to come through and get the results they needed. Seattle plays a very European brand of football and it can be affected even if they are significantly the less talented team while this won’t be the case in this matchup against LAFC which statistically was one of the best teams in the history of the MLS Seattle managed to beat them down despite all the odds stacked against it. Not only did they knock out lafc in the Conference Finals they did it in spite of the fact that they went a goal down after 17 minutes. Seattle gave an immediate response and dominated the run a play to win a 3-1 onesided affair. Coming out of the 4-2-3-1 formation it gives Seattle a lot of depth and willingness to the dictate anything they see. With a defensive Midfield duo that can supply the attack will also acting as a safety blanket for the back line if they’re exposed it gives them a huge Advantage as this style of football can suffocate a teams that are attacking minded like Toronto FC. the link-up play between the Midfield and the attack is really crucial if they can get good ball movement they can control the game from the very beginning. Not to mention They have one of the best goalies in the MLS this sways in to their advantage and because of that they are big favorites to win this tournament. They have been able to deliver they have Supreme quality from Back to Front. Crushed lafc in the Conference Finals prior to that they shut out Real Salt Lake & held off a resilient Dallas team in the conference quarterfinals. They have proven time and time again they have an uncanny ability to deliver in difficult moments and at home they are as good as anyone. They are one of the highest attended teams in the MLS the fans are loud and energetic and crazy they will have a major impact on the game. 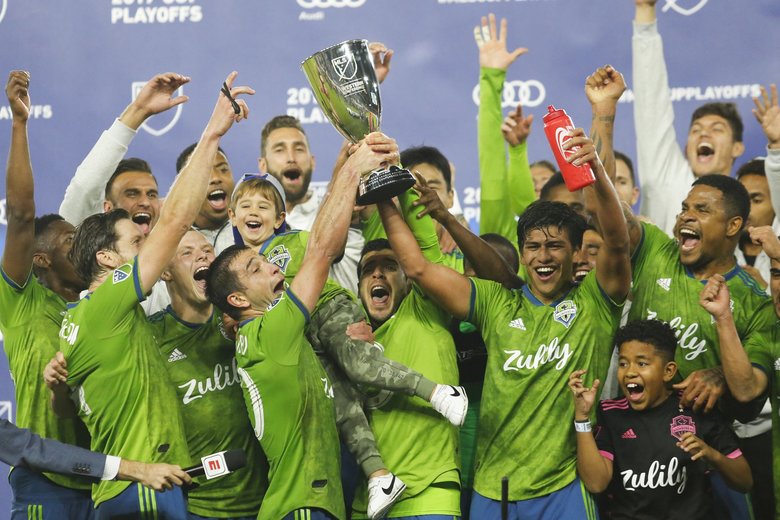 There’s no denying that Seattle is the favorites in this matchup. With that being said how much chance do The Underdogs Toronto FC have at taking the title? They are significantly the less talented team with philosophies that are not good enough to dictate the European style formation that Seattle plays. Nonetheless they have quality in their squad Alejandro Pozuelo is a fantastic player who put together a tremendous season with 12 goals and 12 assists they deserve a lot of credit especially the run through the playoffs which included a creamer against Atlanta United.. Most teams counted them out and they went to Atlanta and beat them in the Conference Finals which is no small task that is one place that is incredibly difficult to get results and they managed to do that even though it was incredibly tight game and they looked out of place at times they managed to cut through this playoffs and put together a tremendous run through all of it. They finished the regular season 4th in the Western Conference as this has not been a very impressive group throughout the season and in fact if Toronto FC had not made the playoffs their manager probably would have been fired. He got his team playing great football at exactly the right time something they have going for them is momentum and confidence they have upset everyone they come through and they have this way about them. They even upset and NYCFC who was the number one seed in the conference a lot of that had to do with circumstance but none the less they came through and delivered in a game everyone thought they would lose. In the first round of the playoffs they absolutely throttled DC United in a game that was forced to go into extra-time. They have to be confident going into this championship game but the fact of the matter is Toronto FC may just be a little bit out overmatched. The team collectively is not as good as Seattle and they will find issues trying to break them down. Seattle plays a very European style in terms of formation in terms of a tactical approach meanwhile Toronto FC is way too attacking minded. A mistake in the back line will ultimately lose them the MLS Cup Seattle setup is designed to stop an attacking minded team like Toronto. With that being said Toronto must rely on their star to make things happen for them if they are at their best they’ll have a chance in this game. I don’t think anyone getting blown out Toronto still has some glaring issues but there is certainly quality within the squad. Jozy Altidore will miss the match which gives momentum to Seattle further. Not to mention Toronto FC is still a team that believes the Michael Bradley Is a quality player that deserves a spot in the starting 11. Michael Bradley is a liability and Toronto has put together an incredible run in spite of that. Can they really overcome all of this playing at the CenturyLink Field in front of those screaming fans it’s going to be difficult. It would take a masterclass by Alejandro Pozuelo to pull it off. The bottom line is Seattle is a much better team that is more prepared for this challenge. Toronto have but the weakness of the 4-3-3 will potentially be exploited by Seattle. They can cover their tracks out of their formation meanwhile Toronto is just attacking oriented meaning one mistake in the back line and they could find themselves down in the game. This is a team that has conceded 55 goals this season a large part of that is because of poor judgement if Toronto has one ill-advised moment Seattle can roll them. I’m going to give Toronto the benefit of the doubt if they play at their absolute best and our mistake-free they could find a way to pull off the upset however I don’t think that happens with the connectivity of Jordan Morris and Raúl Ruidíaz as well as some of the other surrounding parts playing behind a solid back line and one of the MLS is best goalkeepers Steffen Frei it’s going to be hard to break that. it will be a battle through 90 minutes but Seattle has far too much quality to let this one slip through their hands Seattle will win this game I see this game being close for the majority of the match but late there will be a moment of brilliance by Seattle that will allow them to pull away late Seattle Sounders will win the MLS Cup with a 3-1 victory at home in front of their fans I’m afraid the intensity and the lack of a playmaker in the Toronto FC Midfield will just be too much to handle as Seattle will be crowned champions of America. 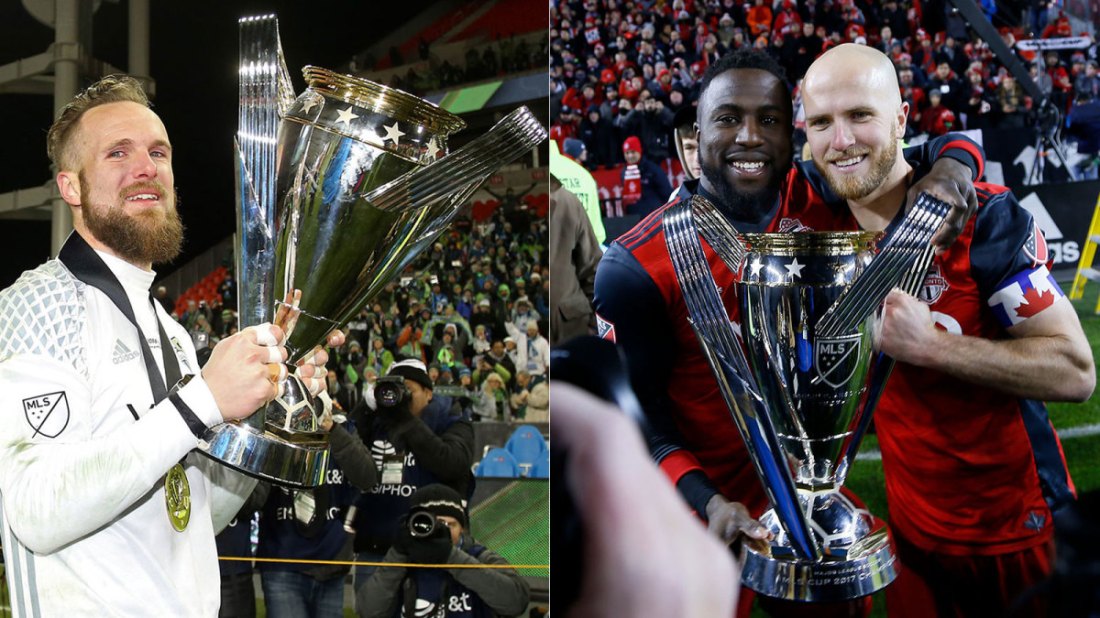