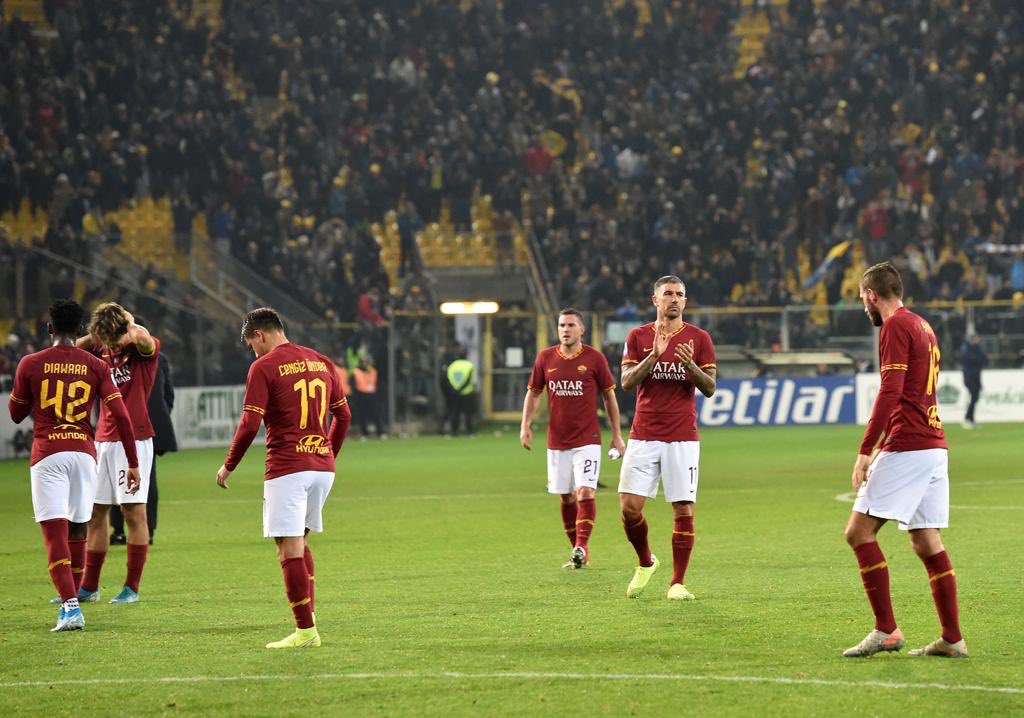 Following a loss in Europe to the Bundesliga leaders on Thursday Roma travel to Parma in what was the final game before the International break. It was a dejected and exhausted Roma team having had played just a few days earlier. Nonetheless in the League Roma had a three-game winning streak and in the top three dropped points would see them out of the top four. Last season Roma beat Parma in both meetings despite that they found difficulties during both matches. Roma was playing with good momentum and confidence as they continue to play well after having gone through a rough period. However, that was about to end. The exhaustion of this team was on display. Nonetheless, Roma was not good enough. It was a goalless first half in which Roma failed to create much of anything despite having more possession they didn’t seem to be doing anything with it. In the second half, Parma gave Roma a punch in the mouth when substitute Sprocati gave Parma the 1-0 lead. The game started to open up slightly in the second half but Roma just was having a difficult time. Their unbeaten streak seemed to be slipping away from them. Late in the game, Roma tried to gather some momentum as they looked very dangerous at times but the tactical approach & tiredness impacted their display. At the Death Andreas Cornelius scored as Parma secure A 2-0 victory. Lack of momentum and confidence truly carried over from the Europa League loss as Roma fall away at Parma as we head into the international break. The exhaustion is valid but it doesn’t excuse the performance as Roma lay an egg at the Stadio Tardini. 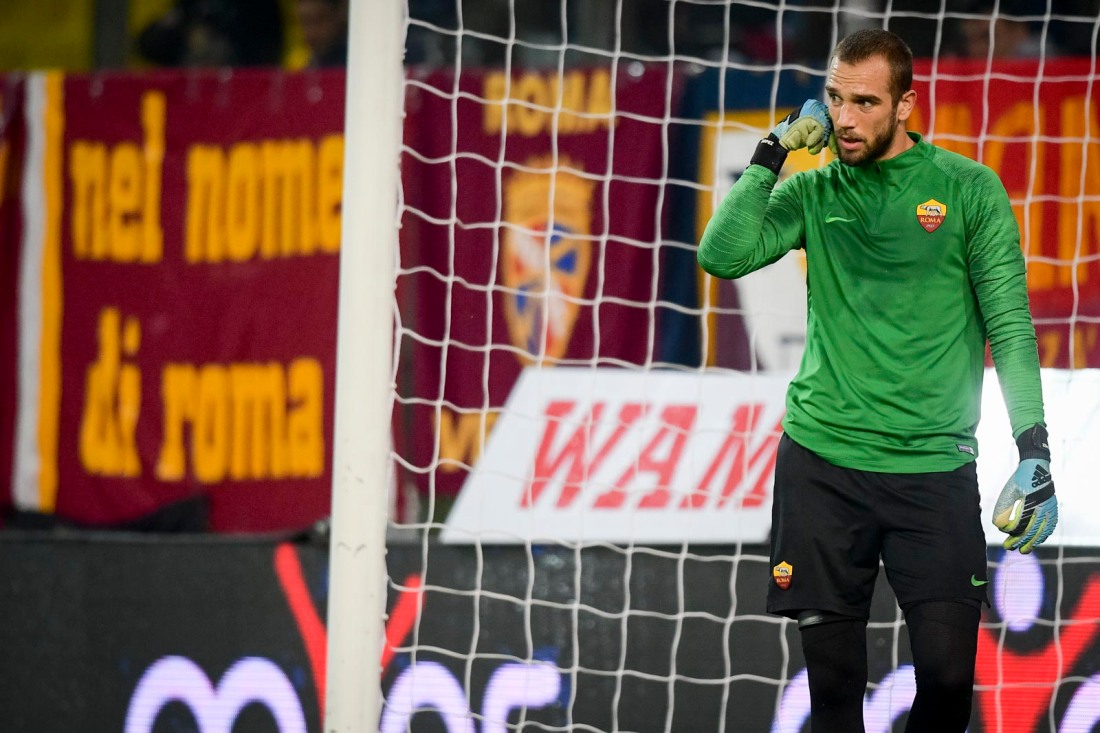 Paulo Fonseca uses his accustomed 4-2-3-1 formation. His lineup was more or less the same from their match in Germany with only one change being made throughout the team. In goal as always would be the Spaniard Pau Lopez. The Roma backline would be almost identical. At left-back would be the Serbian sniper Alex Kolarov. Beside him would be the center-back partnership of Federico Fazio and Chris Smalling. Then returning to the starting lineup at right-back would it be at Leonardo Spinazzola. For some strange reason, Roma Captain Alexandra Florenzi remains on the fringes of the squad having spent five consecutive games on the bench. He is the captain of the team and hugely important it just seemed like a very strange situation. In front of Roma’s backline in the defensive Midfield would be the pair of Jordan Veretout and Gianluca Mancini who continue to patrol a position in the Midfield while Diawara and Bryan Cristante recover from injury. Roma’s attacking Midfield would be identical. In the central position would be Javier Pastore. On the left-wing would it be the Dutch youngster Justin kluivert and on the opposite side on the right-wing would be the in-form Nicolo Zaniolo. Upfront as the main Striker would be the Edin Dzeko. Roma came out with a strong bench with options if needed. 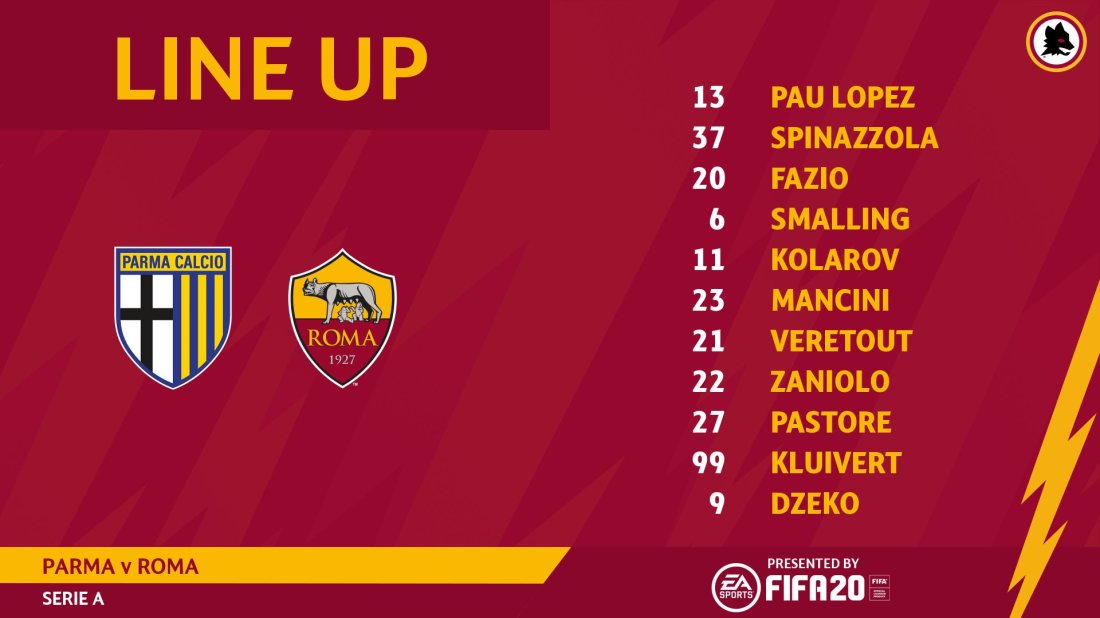 After preparation and predictions, the match was just about to get underway in Parma. In what would be the final match before the international break. Both teams wanted to come out and pick up three points to give them a sense of positivity going into it. Roma dominated the possession battle like they normally do against some of the smaller teams. Parma is a good team that is able to do good with limited possession that is what makes them so great at times. In this game, it was really important that Roma. Although early in the match they had a few early chances as a try to gain momentum early. Roma came close when is Federico Fazio put his head through a cross from Javier Pastore just narrowly missing to the left. After the early chance, Roma began to drift a little bit as Parma found their way in the game. Despite having less possession they were making the most of their opportunities. Parma uses their speed and athleticism of Gervinho to try to wound Roma in the final third. Gervinho missed from inside the Box before Aundrea Cornelius nearly beat Paul Lopez from distance. Midway through the first half, you could see that all the momentum was with Parma as they were finding things far too easily. Unfortunately, the injury front continued as Leonardo Spinazzola was forced to come off. This is where Paulo Fonseca made a mistake it was clear the Alessandro Florenzi should have been elected to come in at that point. However, Santon for some reason was brought in. I have nothing against him but he is not good enough for this club especially in a game like this. Parma tried to break through with Gervinho but Roma’s backline was doing a good job of making things difficult Pau Lopez made the save. Roma’s best chance of the first half came in stoppage time as Justin kluivert try to rip a shot from distance. Parma tried to strike late but Pau Lopez once again making the late save in the first half to keep things level after 45 minutes. 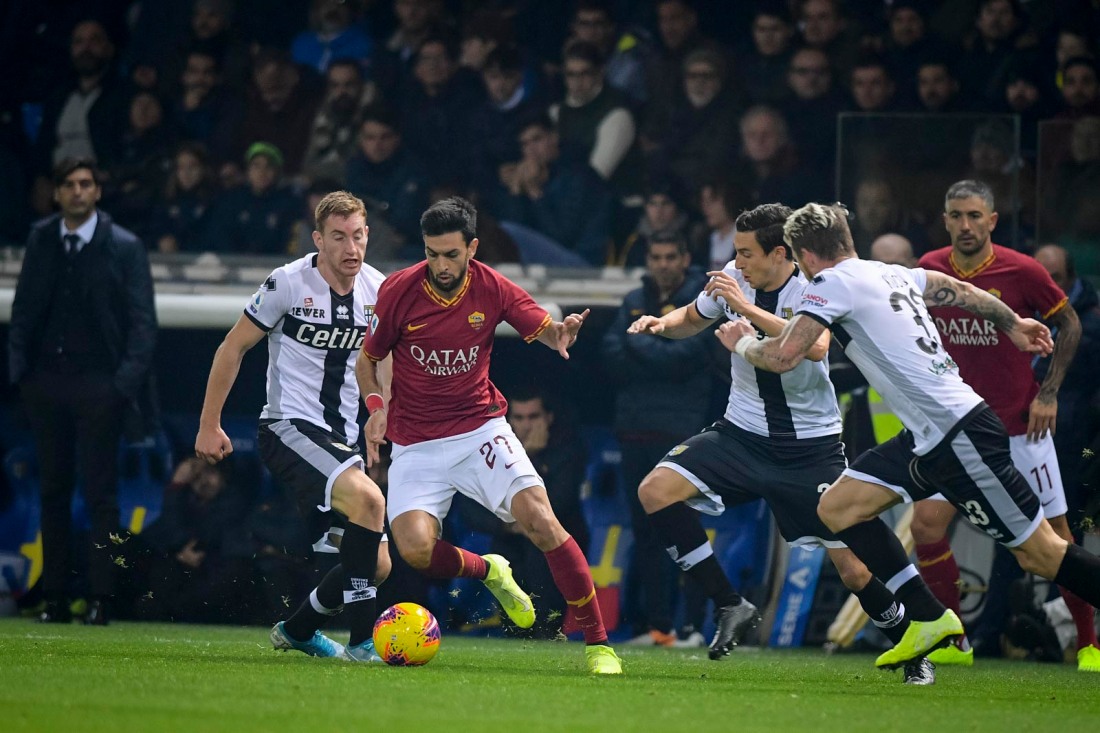 It was a rather disappointing opening 45 minutes for Roma. They had so much possession and yet Parma seems to be the superior team. They were creating chances but were unable to convert on much of them. Early in the second half Roma nearly had their moment from Alex Kolarov. The Serbian left-back nearly curled the free-kick into the top corner but unfortunately, it hit the post in what would have been a sure goal for Roma. The hope was this wouldn’t come back to haunt them because up to that point they were not playing particularly well and that was their moment to breakthrough. Javier Pastore tried to put in the rebound but he was denied by The Keeper in another close one. Roma would make their first change of the game as Cengiz came in for Javier Pastore. It seemed like Roma were starting to get themselves back into the game. The confidence they had was about to get broken in a 68th-minute substitute Mattia Sprocati stuck the ball into the bottom corner coming off a cross from the wing to give a Parma the 1-0 lead. This would not give Roma very much time to find their way back into the game with about 20 minutes ago. Following the goal, Diawara came in for Federico Fazio. Parma was seizing as they continue to try to break them down and get a second. Andreas Cornelius and Kuka were denied by Pau Lopez. Defensively Roma was still doing an outstanding job but couldn’t do it on the other end that was their biggest problem. Parma continues to come forward. Under and Nicolo Zaniolo hooked up for Roma but Zaniolo’s strike from Deep misfired. Roma was playing almost desperate late in the match even though they had the ball at their feet a lot they couldn’t find a way to breakthrough. Roma showed some attacking aggressiveness Cengiz Under was denied from Deep and so was Justin kluivert. With two minutes to go, Justin kluivert struck again in what was A well-hit strike but Lupe Sepe continued to deny Roma of A late equalizer they were searching for Nicolo zaniolo misfired in The 91st minute that seemed to Signal the end. However, Parma got on a Counterattack that ended up with Andreas Cornelius putting the ball into the back of the net on the counter to give Parma a 2-0 lead. An underwhelming performance from a tired Roma team that had no gas in the tank. A very underwhelming display they weren’t good enough. Roma head into the international break suffering their second loss of the season as the momentum that was driving this team over the last few games has run out for the time being. 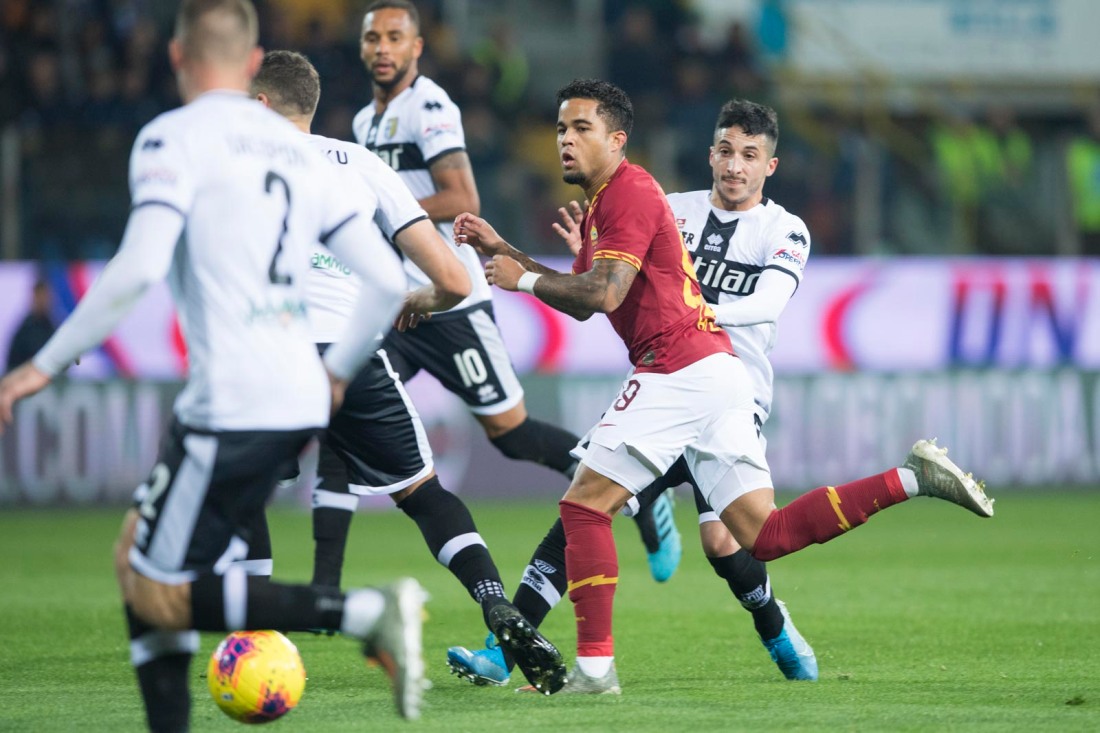 It was a truly underwhelming performance by Roma who desperately needed some momentum to pick up the slack from their previous match. Roma seems to be a team that vibes off momentum. If they have a lot of confidence they play well if they are lacking in that area they seem to underperform. Roma’s greatest fears are becoming realized this team still has a serious problem of inconsistency. Parma is a quality team with really good players within the squad but they do not have the team that Roma has. Roma is a significantly stronger team with better assets yet they were outplayed by a Parma team that only held a 38% possession. Roma dominated possession battle but couldn’t do anything with it. They only had one shot on target in the first half and things only started to pick up after they had conceded. Paulo Fonseca is one of the best coaches in Italian football he is a brilliant attacking minded coach but on Sunday afternoon there was a mismatch in that area. The substitutions he made were somewhat questionable and his team was unable to perfect his philosophy. Even when Leonardo spinazzola had to come out he opted for one of the most least qualified center-backs on the bench Florenzi would have been a much better replacement at that time and it’s becoming a problem. Defensively Roma is still an incredibly strong team and even in this game, it was one of the bright spots. The attacking strategy did not work whatsoever they created a lot of chances but ultimately were denied by their own doing with their inability to finish in front of goal. This is something that has been mentioned before and it will be mentioned again for the rest of the season they have an issue in this area and they need to perfect that part of their game. This is a Roma team that doesn’t have a lot of cracks inside of it but when those cracks are highlighted and there’s no improvement in that area you’re going to have a problem. Cengiz should have been brought on earlier by the time he was in the game there wasn’t really a way for him to affect the game in the way he usually can. Overall it was an underwhelming display and it came at a really bad time Roma needed a momentum boost going into the international break. I know it’s not the end of the world because Roma is within touching distance of the top three as they are only just a few points out. However, they had been on a good streak and they failed to extend it. The Inter Milan match is not that far away and Roman need to try to address these issues. The man of the match goes to Gianluca Mancini who has continued to progress in his position but collectively they’re not a lot of positives to be taken after an abysmal display Parma were the better team A 2-0 loss to Parma is not how they would have liked to follow up a previously disappointing display on Thursday.

MAN OF THE MATCH: Gianluca Mancini (3) 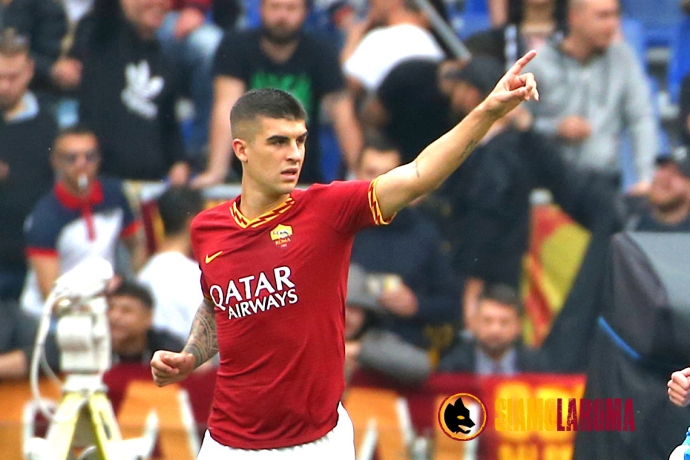