Roma were coming off back-to-back losses to start the new year. The winter break really disrupted their momentum. Roma continued to search for that confidence that they are in dire need of results. Roma would have the chance for some Revenge as they would open up the Coppa Italia round of 16 match up against Parma a team that had already lost to this season. This was a really important match not only because if knockout football but because Roma have some difficult matches upcoming and need to gather some confidence before then. It was a back-and-forth battle throughout the match but for the most part Roma did have control of it. Even though a Roma were away from home in this match they found a way. After several close opportunities for Roma in the first half Roma failed to break through the game opened up a little bit more and when Roma got their chance they took advantage of it. Lorenzo Pellegrini struck on a very well orchestrated play by Roma giving Roma a 1-0 lead in the second half. They continue to try to build on that as they were able to handle parma’s attack that provided next to nothing. Parma’s defense came to play but Roma continue to find ways to pressurize them into uncomfortable situations. Late in the second half Roma were given a penalty. It would be Lorenzo Pellegrini who stepped up converting the strike to give Roma a 2-0 lead. Despite parma’s best efforts Roma went on the road and through Lorenzo Pellegrini clinched their ticket to the Coppa Italia quarterfinals. They get revenge on the loss they suffered earlier this season. This was a great confidence boost as they needed a performance like this to take them through the rest of the season. Roma will go on the Road to face Juventus in the quarterfinals.

Roma line up out of the 4-2-3-1 formation as they usually do it would not be too many changes in this match. In goal as always would be the Spaniard Pau Lopez. Roma would come out with their usual backline. At left-back would be the Serbian sniper Alex Kolarov, beside him would be the centre-back partnership of Gianluca Mancini and Chris Smalling then occupying right back would be Roma Captain Alessandro Florenzi. In the Roma defensive Midfield we would see the duo of Bryan Cristante and Diawara this is something that we could see pretty regularly with this team. In Romans attacking Midfield in Center position would be as always Lorenzo Pellegrini. On the left wing would be Diego Perotti who continues to fill in for Justin kluivert. However the Justin youngster remains on the bench. Once he achieves full health he will fit in back in the starting lineup. On the opposite side on the right ring would be the Turkish star Cengiz Under. As he comes in for Nicolo Zaniolo who is out for the rest of the season. Then up front as the main Striker would be Nikola kalinic as Edin Dzeko get the night off. 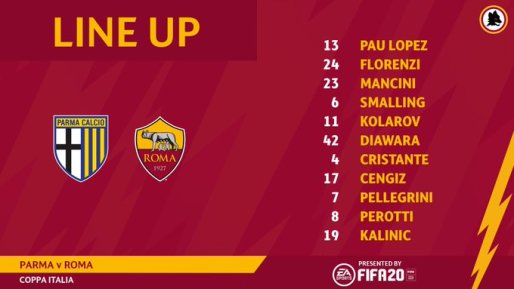 After preparations and predictions the match was just about to get underway as Roma made the trip to the Stadio tardini and Parma as they searched for Revenge as they had their eyes on progressing through the cup. It is a Coppa Italia football on a Thursday night. Roma from the very early parts in this game showed their superiority and desire to get to the quarter-finals. They controlled possession and from the very beginning of the match tried to broke Parma open early and often. Roma didn’t waste any time as they came close in the opening minutes. With only 10 minutes gone Lorenzo Pellegrini was set up very nicely by Nikola kalinic. The Roma born midfielder struck a very nice shot at the Parma net what was ultimately denied by the goalkeeper. Lorenzo Pellegrini despite being unable to score really sent a scare into the Parma backline. Parma struggled to create much in the first half very early in the match Roma sorta reiterated their control in the match as they were able to get forward without much difficulty. less than a minute later coming off a corner Lorenzo Pellegrini struck again this time putting his foot through a cross coming off an corner kick. Pellegrini came close yet again just nearly misfiring. Lorenzo Pellegrini was on his game early showing his impact early. Cengiz then  tried to pull a fast one over them hitting a strike from Deep coming off another corner. Roma we’re applying a lot of pressure on a Parma defense that was doing a good job but there just was a certain feeling that it was only going to hold up for so long. Roma continue to show their superiority as they contain to create  almost repeatedly. Roma came close again near the 20 minute Mark when ALEKS Kolarov nearly scored from a free-kick it was coming it just hadn’t happened quite yet Parma was not applying anything going forward it was really becoming Roma’s attack against parma’s defense. Near the end of the first half Gianluca Mancini put his head through a cross coming off a free-kick to try to give Roma a late lead coming off a set piece but ultimately Roma didn’t have it together yet. this would end the first half in a goalless draw.

Even though Roma were in a goalless draw it was a very productive 45 minutes from Roma. They had complete control the game dominated possession and orchestrated several opportunities for them to take the lead. Even though it had not happened yet there was a sense that a goal was going to come shortly. Diego Perotti kicked off the second half with a strike from a very difficult angle he just didn’t have the accuracy but it was an ambitious strike. Roma continue to knock on the door and eventually the door came down. In the 49th minute the moment had arrived. On a counter attack with quick ball movement Kolarov connected with Nikola kalinic who laid it off to Lorenzo Pellegrini who  hit a blistering strike from the side of the box as a ball got buried into the bottom right corner to give Roma a 1-0 lead early in the second half. Parma’s defense do a good job holding up but naturally they were always going to lose because Parma struggled to create much of anything. It would be Lorenzo Pellegrini second goal of the season with a goal that puts Roma on the verge of advancing to the quarterfinals. Roma continued to have control of the match but finally Parma had a chance Roberto Inglese  came through with a great strike but Pau Lopez was there to deal with it making a great save. The later it got in the match momentum only continue to build. Lorenzo Pellegrini late set up Nikola kalinic who struck from point-blank range but saw his shot get dealt with by the Parma goalkeeper Lorenzo Pellegrini struck a few minutes later but the goalkeeper was able to deal. Not long after in the 70th minute Roma had an opportunity to double their lead. after a handball in the Box Roma were giving a penalty. Lorenzo Pellegrini stepped up he had a quick run up before blasting the ball calmly slotting it into the bottom corner to give Roma a 2-0 lead. Just prior to the penalty Justin kluivert would come on for Diego Perotti as we would see the Dutchman in action for the first time since his injury. When kluivert came on it looked like the same we say his explosiveness and pace. Justin kluivert put together two incredibly good chances for Roma. The youngster struck from deep twice after orchestrating and displaying his athleticism. Justin kluivert back in this team is going to be a great thing for Roma if they had a player of his particular skill-set it’s possible they would have done better over the previous two games. Roma had control of the game as they saw the match out. Lorenzo Pellegrini punches Roma’s ticket into the Coppa Italia quarterfinals after a 2-0 victory. They will play Juventus next week in what was a terrific display from the Romans. 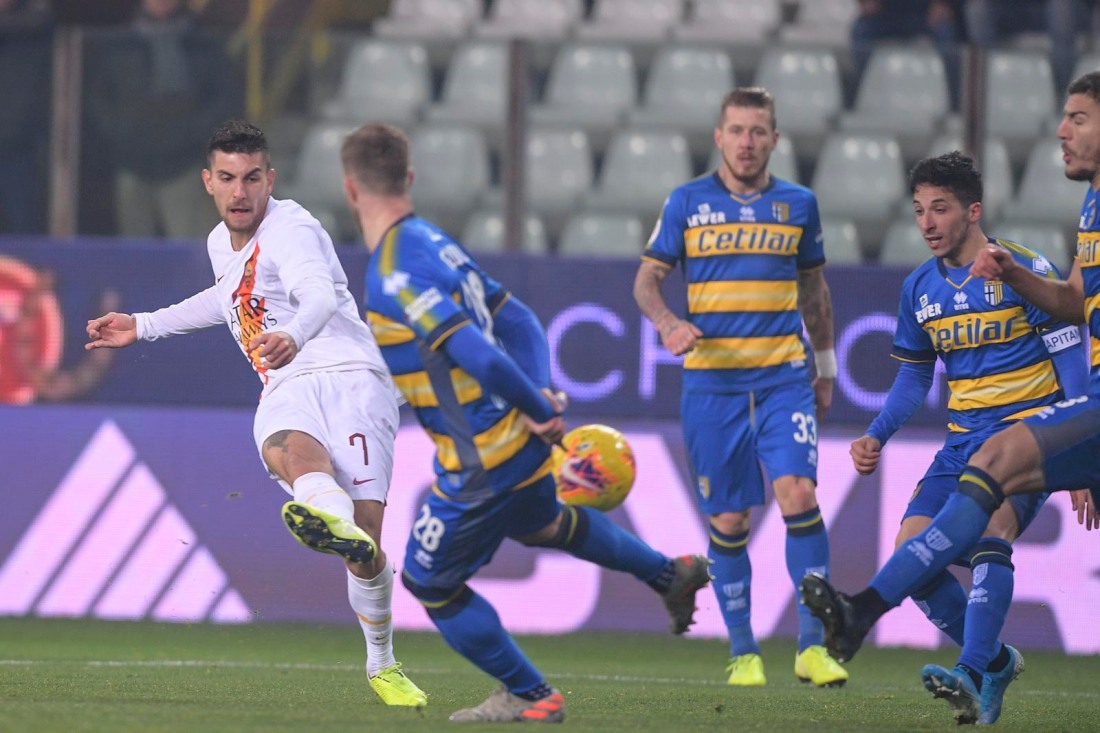 After two back-to-back inconsistent performances and matches against Torino and Juventus that Roma probably should have won Roma finally puts together a good performance that they can build on. A big part of the problem of starting the second half of the season this poorly is they were lacking momentum and confidence in the ability to perform. In a midweek feature in the cup against a team that are already being in this season Roma get revenge and put together a solid performance. Roma starting to get that confidence that they need to push them on through the rest of the season. I still believe they will get Champions League football this year and have an opportunity to finish in the top three if certain things go their way. This was a good performance for morale and they will have an opportunity to make up for their mistakes against Juventus as Roma will get another crack at them in the quarterfinals. Parma is a strong team and I did really well defensively but Roma controlled the game. It was in their control the majority of the match. They created enough opportunities to get the job done. Even though they were kept scoreless in the first half Roma seemed like they’re on the verge of breaking away. In the second half Lorenzo Pellegrini happened as Roma born and midfielder put together a sensation to display scoring two goals in the second half as Roma ultimately push themselves in it to the quarterfinals of the Coppa Italia. If they get past Juventus they will have a really good chance of lifting the trophy. The man-of-the-match was Lorenzo Pellegrini who after a unfulfilling performance over the weekend Justified his claim as one of the best midfielders in the league with a really Sensational display. On top of that it is so good that Bryan Cristante is back he has shown consistently that he is so important to this Roma team. The duo a Bryan Cristante and Diawara seems like a perfect match. They’ve only play together a little while but they have shown their qualities already. Then on top of that Justin kluivert returned from injury and still looked as special as he did before. Once he reaches full health and is able to return to the starting lineup he will be able to fill in the gap that will be left from Nicolo Zaniolo He is Roma’s most explosive player and in big matches he’s capable of showing special qualities. That’s why this was a performance that they needed Roma can finally feel good about themselves after a really great performance that they did not need to work too hard for they found things pretty easy despite the circumstances now it’s important that they Roma take this momentum into the next couple games to try to make up ground in the Champions League it was an all-around performance from everyone involved.

MAN OF THE MATCH: Lorenzo Pellegrini (3)