Roma are coming off another loss to Juventus in the Copa Italia quarterfinals as they were sent packing from the competition. However they did beat Genoa last weekend in the league to retake fourth from Atalanta who lost to SPAL. This would set up perfectly one of the most anticipated matches in the entire season. That’s right it’s Derby Day as we revisit the Derby Della Capitale. In the first meeting between these two teams it was a 1-1 draw that Roma was fortunate to get out of being bailed out by the crossbar on four different occasions. At the Stadio Olimpico on Sunday we will see one of the most heated rivalries in sports. In what is expected to be a thrilling matchup on Sunday night. Lazio are in the best form of the club’s history and on top of that are trying to find their way into the title race. Meanwhile Roma is dealing with even more injury concerns despite this they remain contenders for Champions League football next season. But you have to remember this Derby is more than just the football we see on the pitch. The BIG GAME arrives Sunday in Rome where the entire city shuts down for 90 minutes. There is nothing in the city more important than Derby Day. The Rome Derby is also known as Derby Della Capitale. The local Derby between arch-rivals Roma and Lazio hatred between them that stretches through generations. The Rome Derby is considered one of the most violence aggressive and importance derbies in World football. No Derby in the world holds more important on Supremacy in the city. Roma Lazio, it’s never about winning the league although that is the ultimate goal that is not the most important part of the season. The sole purpose is to win the Derby. In Rome the Derby more than any other city in the world. As a romanista myself this is something I have seen every season. It means so much to the players and the city itself. It’s not about We Are the Champions of Italy it’s about we finished ahead of them. It is vile it is cruel it is dangerous and it’s exciting. Lazio fans and Roma hate each other and that is always going to be the case we wouldn’t want it any other way it is what makes it so enticing because the hatred of these two teams is it very real. This is not just a football match, in fact, this not even sport winning the Derby is the reason to be proud which is why this fixture means more than any game this season. Personally, I don’t usually get too personal when I’m making an assessment of a game but there’s nothing in this world I hate more this Lazio Football Club. I hate their color I hate their logo I hate their players I hate their management I hate everything about them. If you’re over Lazio fan you feel the same about Roma. Since 1927 they have played 186 times Roma currently lead this historic fixture with 71 wins to Lazio’s 53 wins as well as 64 draws. Roma has dominated their City Rivals for some time since Italian football’s Inception they have finished ahead of they’re noisy neighbors 68 times. Make no mistake this is Roma’s City however when these two teams play doesn’t matter how many points each team has or how well they’re playing there’s nothing that drives a player more than winning the Derby. Last season Roma won the season series with a win with the other match being a draw. However with all that being said Lazio come into this match as rare favorites only slightly the question is can they handle the pressure. Make no mistake this is a World War this is not just a football match.

Roma are likely to line up with the same 4-2-3-1 formation they have used almost exclusively throughout the season. Unfortunately on a Wednesday just a week after Nicolo Zaniolo would be out for the season Roma lost Diawara who was becoming one of the best midfielders in the league he is expected to be out for two months. It makes things even more problematic for this team. In goal is expected to be Pau Lopez. In front of him will be the back line that we have seen a much of the Season. At left-back Alex Kolarov. Besides him we should see the centre-back partnership of Gianluca Mancini and Chris Smalling. Then right back that right back it was either be Alexandro Florenzi or Leonardo Spinazzola. In this match in the derby Florenzi is likely to get the start. In the defensive Midfield we should see the duo a Bryan Cristante and Jordan Veretout as Roma have a valuable option in replacement of Diawara. In Roma’s attacking Midfield there shouldn’t be much of any change. In the central position will be Roma born Lorenzo Pellegrini. Then on the outside Justin kluivert and Cengiz respectively. Up front as the main Striker will certainly be edin Dzeko. Roma will have Diego Perotti available on the bench as well as a few other options but at the moment Roma have a thin bench and need positive output from their starting lineup.

On the other side Lazio are likely to maintain their 3-5-2 formation it sounds and looks very defensive but they play attacking style football in a defensive formation. In goal as usual should be Thomas strakosha who is a very capable keeper. Lazio have a back 3 at left back Patric  then beside him as center back should be Francesco acerbi then out at right back is Radu. Lazio come out with five midfielders. A mix of defensive and attacking Midfield. Occupying the left should be Jonathan Rodriguez. Beside him as always the Midfield Catalyst Luis Alberto, beside him Lucas Leiva and milinkovic-Savic then on the opposite side to Rodriguez should will be Lazzari. An upfront is likely to be Correra alongside the League’s top scorer Ciro Immobile. Luis Alberto is likely to be the biggest difference his passing ability and the ability to supply his teammate should be the difference.

The Roman Derby is more than a football match it means everything as I laid out in my opening. League form may have some value but in the grand scheme of things it is more less irrelevant. It doesn’t matter if Rome and Lazio are challenging for titles or struggling this is always a matchup that any team is capable of winning. Roma have owned this fixture for the most part since its Inception. Not to mention they have finished ahead of their City Rivals so frequently. Even in some of Lazio’s best years they have fallen short in the long run. It does appear this season there’s going to be a change. Lazio do look like title contenders and may just finish ahead of Roma for the first time in almost a decade. From the football point of view Lazio is the better team they are playing some really great football they are in a historic run of form. Lazio has won 10 League games in a row which is unprecedented even in their scudetto winning season they were unable to do that. This is the best Lazio team we have seen in a decade. However that doesn’t mean they get the job done on Derby Day. In the first match Lazio probably should have won that game but was denied by the goal post you can make the argument that it was rather unlucky for that not to walk away with three points. All that said Lazio will be rare favorites in this they are playing with an incredible confidence and are in the mist of a historical winning streak. Roma has dealt with injuries after injuries and even though they are in the Champions League place and I will likely to get that spot things will become difficult in this match. Roma have gone above and beyond expectations that were set on this team before the season. Paulo Fonseca has done an exceptional job having this team competitive. However the injuries do matter and Nicolo Zaniolo and Diawara have been two of Roma’s best players this season that Roma will now be without.  Roma can still find a way to pull off the upset and continue to dominate this fixture. The fact the Lazio is playing so well gives Roma the opportunity to ruin it. There are very few people that I believe that Roma can beat Lazio at this moment. Player-for-player Roma is a much better team the difference is they are playing with momentum and confidence. However Roma are a different team to what Lazio saw the first time around. Roma have massively improved defensively and that can make a big difference in the match. Lorenzo Pellegrini for Roma is the key when he is on his game he’s the best midfielder in Italian football. Luis Alberto may have more assist but he is not a better player than Pellegrini. He has passing ability and vision that is unprecedented. This is set up for Lorenzo Pellegrini to have one of his great games. He is a Roman born midfielder who has the potential to rain on Lazio’s title party. Roma will have to deal with the Firepower of Ciro he has 22 goals and season in the league nine of them have come from the penalty spot which is another thing Roma have to worry about it. Lazio have been given the most penalties in the League this season Roman need to defend but do it carefully. For Lazio Luis Alberto is the one who can make the difference it will be a battle between Pellegrini and Alberto which playmaker can make the biggest Mark in the game. We will find out when these two teams go to battle at the Stadio Olimpico in Rome and one of the most hated Derby’s in all of football. Lazio may have the better team but Roma just always seem to have a way of proving Superior against their City Rivals. The winning streak ends here in Rome as I suspect Lorenzo Pellegrini will have his Footprints all over the final result. 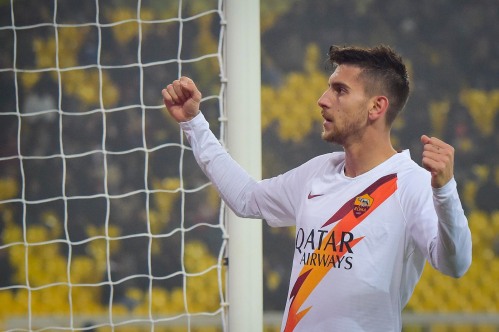