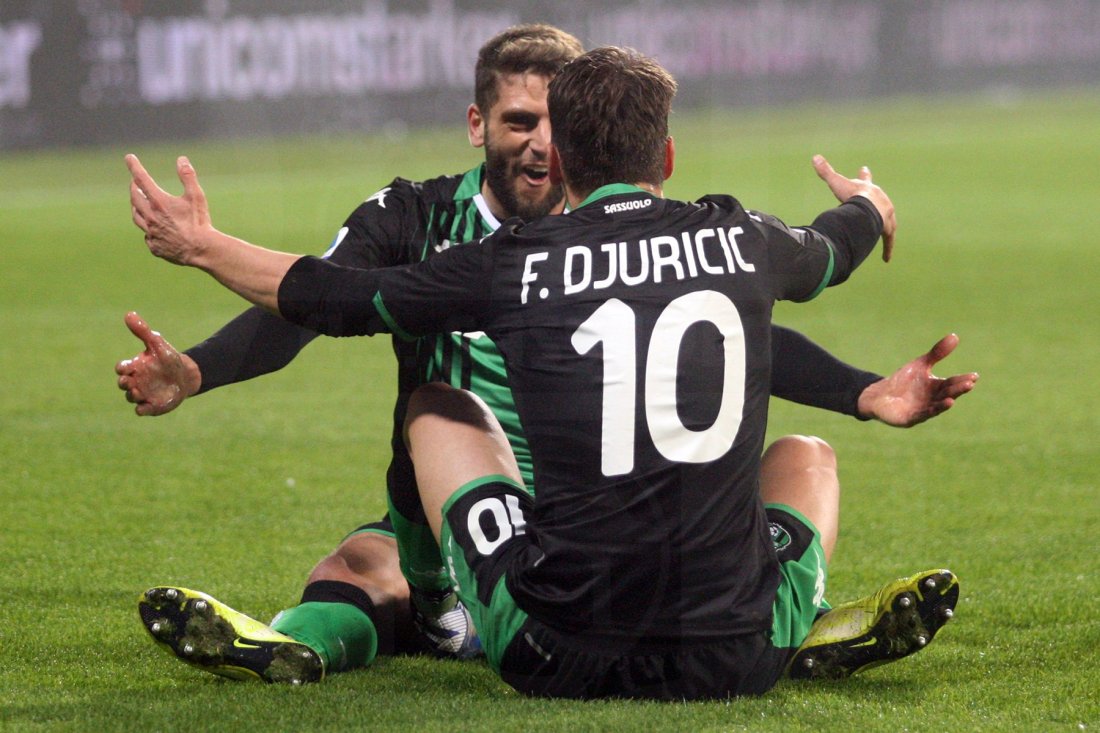 Following a really strong performance against Lazio in the Roman Derby on Sunday Roma headed out on the road to face sassuolo who is Comfortably away from the relegation Zone but not real threat of chasing European . Roma beat them earlier this season at the stadio olimpico in what was one of their most brilliant attacking performances of the season as Roma ended up building a massive lead in that game before eventually beating them. Roma has never lost to them in their history. Since sassuolo has been promoted to the top of Italian football they have never beat Roma even more so at home they’ve only registered one goal against in the last several years. This match was set up for Roma to pick up the points and continue to try to build their Champions League Chase. It looked like it was going to go their way in the early part of the game they controled momentum had the advantage in The Possession battle and in the early couple minutes looked to be a threat. However Sassuolo ended up getting on the break and scouring through Francesco Caputo with a beautiful goal to give the hosts the 1-0 lead. This took some of the energy out of Roma and they had a really difficult time getting themselves back into it. Roma made early mistakes and were horrible defensively. Just like that Sassuolo doubled their lead Francesco Caputo beat Pau Lopez for a second time as they opened up a 2-0 lead. Roma we’re now in some trouble not long after they would get a third after 45 minutes it was a 3-0 lead. Roma appeared to be dead in the water after an abysmal opening 45 minutes. Things that didn’t get that much better in the second half Roma managed to try to fight their way back into the game. As edin dzeko scored his 100th Roma goal in the second half to minimize the deficit. Late in the half they even got within one goal as Jordan veretout converted from a penalty but just a minute after minimizing sassuolo put the final nail in the coffin as Roma suffer a 4-2 defeat away from home in what was uninspiring display despite coming back Roma didn’t have the stomach to respond in what was a hugely disappointed performance from the Romans. Roma are the better team but they certainly didn’t play like as they lose to them for the first time in history.

Roma as usual would come out with the 4-2-3-1 formation as Paulo Fonseca has really kept the same setup at the entire season. In goal for Roma would be the Spaniard Pau Lopez. He is coming off a poor performance against Lazio in the derby but we should see a rebound performance here. At left-back would be Leonardo spinazzola Besides him would be the centre-back partnership Gianluca Mancini and Chris Smalling. Then at right-back would be Davie Santon. In the defensive Midfield for Roma would be the duo of Bryan cristante and Jordan veretout. In the attacking Midfield in the center position would be Lorenzo Pellegrini. Next to him on the left wing would be Justin kluivert then all the opposite side what would Cengiz Under. Then up front as Roma’s main Striker would be edin dzeko who looks for his 100th Roma goal this afternoon. Roma will have plenty of options on the bench that will include the three January signings Roma have made Rodger Ibanez, Gonzalo Villar and Carlos Perez as well as Diego perotti and others available as needed

After preparations and predictions the match was just about to get underway in sassuolo. Roma has never lost to them in their six meetings since they have been in the top flight this is one of the teams that they really struggle against. However early in this game they were trying to change that narrative. In the very early part of the game Roma did seem to have a somewhat control even though it didn’t last very long. They controlled possession that came through on several different occasions really starting to pressurize sassuolo. An Bryan cristante strike from outside the box that went right into the goalkeepers hands was a turning point in the game. Just a minute later in the 7th minute on a counter-attack Francesco Caputo beat Paul Lopez on a terrifically orchestrated play to give sassuolo a 1-0 lead. All the energy and confidence that Roma had was getting stripped from underneath them Paul Lopez would make a save on Boga and Ferrari to try to keep Roma into the game. Roma found it really difficult getting it outside of their own area and just like that it would go from bad to worse. On another Fastbreak Francesco Caputo buried his strike in the back of the net in the 16th minute to give sassuolo a 2-0 lead. Roma were in some serious trouble if they did not get out of this rut quickly the game was going to get out of hand Roma are significantly more talented and have better players in their team than the opposition so there’s always a chance they can come back but they were starting to make it really difficult on themselves. Roma tried to mount a comeback as Chris Smalling was denied by The Keeper. It would get even worse in the 26th minute sassuolo opened up a 3-0 lead before the half-hour mark. It was an utterly unacceptable and pathetic opening 45 minutes Roma were already down by three goals just 45 minutes to go they would need to do a whole lot and then some to even get a point from this game it looked all but over after half hour as a sassuolo led 3-0 after 45 minutes.

It was a really abysmal first-half performance by Roma. Performing at a high level away from home is something Roma has constantly done this season. They saw their entire match blow up in the matter of minutes. Roma unlike like last year have not gotten into these holes. They allowed their opponents to open up a huge lead in a match that was probably to much to overcome. Roma had to fight and give everything to fight their way back into the game. At this point even a draw would be satisfying enough they could not have started this game in any worse shape. They were not playing like Roma in that first half they looked more like Livorno. In the second half they would have the opportunity to fight their way back into the game. Lorenzo Pellegrini on early strike misfire in the opening minutes of the second half. Roma were determined to get back into the game as edin dzeko came close on two different occasions both being denied by the goalkeeper. Despite the scoreline Roma came out looking much different in the second half. Finally Roma would have that chance to get back in the game in the 51st minute Lorenzo Pellegrini sent in a cross for edin dzeko the Bosnian Striker put his head through it as the ball ripped through the bottom corner to minimize the deficit. It would be edin dzeko’s 15th goal of the season and his 100th goal for Roma as the Bosnian reaches at the century mark for the Romans. Roma try to build and carve their way back into the game. Roma looked like a different team in the second half but still lacked something to be desired. Bryan cristante can close on two opportunities and edin dzeko nearly scored on another strike that got blocked by the defense. A few minutes later Leonardo spinazzola strike from the side of the box that came close despite getting back in the game Roma still had some work to do. Roma go to the bench as Carlos Perez would make his debut coming in a for Cengiz under. In the 71st minute Roma were given a penalty. Lorenzo Pellegrini was given a second Yellow Card a few minutes earlier so Jordan veretout stepped up and converted minimizing the deficit at 3-2. All of a sudden Roma were back in the game with an outside chance of getting a point. However it collapsed a minute later as Jermaine Boga put the game away for good. Roma brought on Gonzalo Villar with eight minutes to go To try to do something in the final 10 minutes. Roma had a few opportunities near the end of the game that could have been the difference but a poor first-half display proved to be costly as Roma lose to Sassuolo for the first time ever as they suffer a costly defeat on the road. In what was inspiring display From Roma in a 4-2 loss.

Roma got in a hole early tonight and couldn’t dig themselves out of it. They started this game the way they usually do they had controlled possession and they were pushing. The first couple minutes of the game it looked like the Roma team that we have seen countless times this season. Despite that a turn and momentum derailed their performance and the game. Sassuolo scored an early goal and only built on that. They scored two more before 30 minutes had been gone. Roma had to come back from the dead to even stand a chance in this match. Roma were away from home in this match and found things really difficult. Roma is one of the best teams away from home this season having only been behind a very small amount of time this season when playing away from the stadio olimpico. Roma is a team that is in a significantly better position then their counterparts. Roma are fighting for Champions League football while Sassuolo are comfortably in the mid table not threatened by relegation but certainly not fighting for Europe. There would be a huge difference in quality within each team’s and even though Roma were heavy favorites they had huge problems in the early goings of the game. In the first match between these two teams Roma ran through them building a 4-0 lead before Sassuolo ended up coming back regardless Roma won that game 4 to 2 historically speaking Roma has handled them they have never beaten Roma until today. Roma got down early and completely lost momentum in the second half it would be more than the same. Edin dzeko tried to get Roma back into the game scoring his 100th Roma. It was an overall poor performance and they just couldn’t fight their way . & were awful defensively. However Roma came close when Jordan veretout converted a penalty to minimize the deficit to just one goal but yet again Roma would collapse right after scoring as sassuolo would score the final goal of the match that would be the nail in the coffin. The winter break severely has affected the form that Roma have displayed. Going into that break Roma were rolling and all of a sudden it has taken them a while to get back playing the football we expect from them. It was a disgruntled performance especially away from home where they have had so much success this season. Tonight was one of Roma’s worst performances of the season. Roma couldn’t the bounce back even though they didn’t give up in the second half and got themselves within a goal it was a sloppy all around in a very uninspiring performance. Edin dzeko is the man of the match but as a team tonight Roma let themselves down.

MAN OF THE MATCH: Edin Dzeko