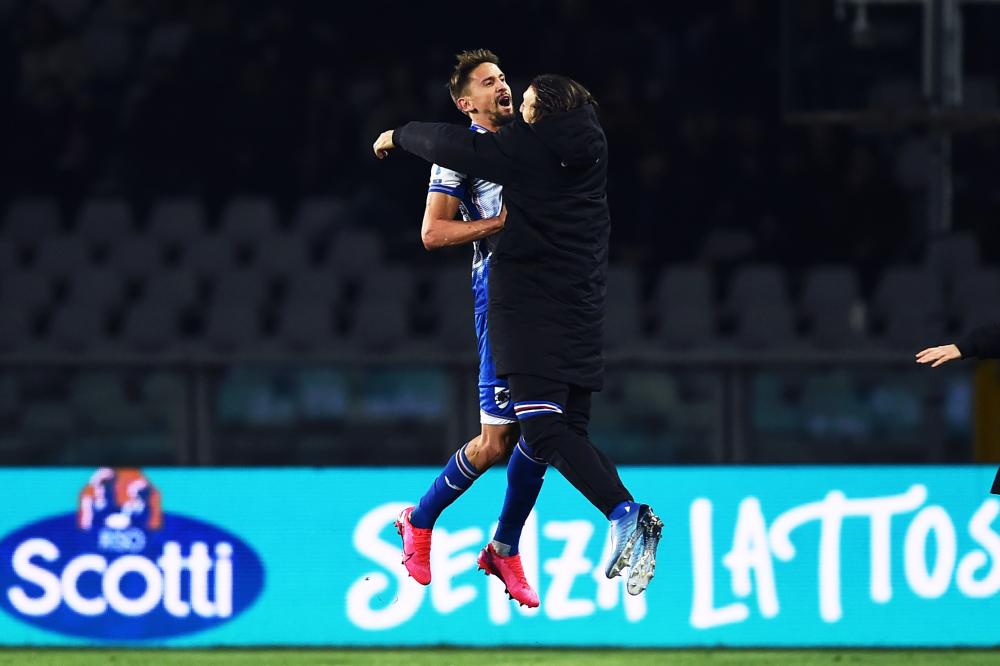 This week we saw a lot of unlikely heroes in some big matches across the league. One of them was Gaston Ramirez in Sampdoria’s 2-1 victory over Torino he made the big difference that ultimately ended up with his side taking up all three points. Going into the game Sampdoria was just one point outside of the relegation Zone. It has been a struggle for Claudio Ranieri and this team especially with the heartbreaking loss last week to Napoli. This team does not have Superstar players that are NOT going to appear on this list very often but once in a while he will be a performer that outshines his counterparts. This week that goes to Gaston Ramirez. Torino was a team that week-by-week was being dragged down into the relegation Zone. They’re not there yet but they have consistently lost big games since the start of the New Year outside of one victory. They just fired a coach and they were in need of points and it had looked like they were on the verge of getting their first points in weeks. Torino had a 1-0 lead after Simone Zaza scored in the 55th minute. It is something that Torino need it after having such a terrible run of form. However Sampdoria understood their place and that they need points to try to escape the relegation Zone. At this point it does not look like they will be dragged back down but it is a long season. Just when it looks like Sampdoria was about to lose the game in came Gaston Ramirez in a matter of minutes Sampdoria was in front. Gaston Ramirez earns a spot as one of the performers of the week for the first and probably last time this season. He scored two goals within 5 minutes to take Sampdoria from 1-0 down to win 2-1. A burst of five minutes of football completely turned around a performance and Gaston Ramirez was the architect of the comeback. He is a player who is capable of Great Performances once in awhile this won’t happen every week but with everything on the line in a game like that Ramirez came through and delivered for his team as they create a little separation from the bottom. Gaston Ramirez made the difference as he earns himself on my list proving to be one of the performers of the week with a performance that was the difference between three points and zero points. 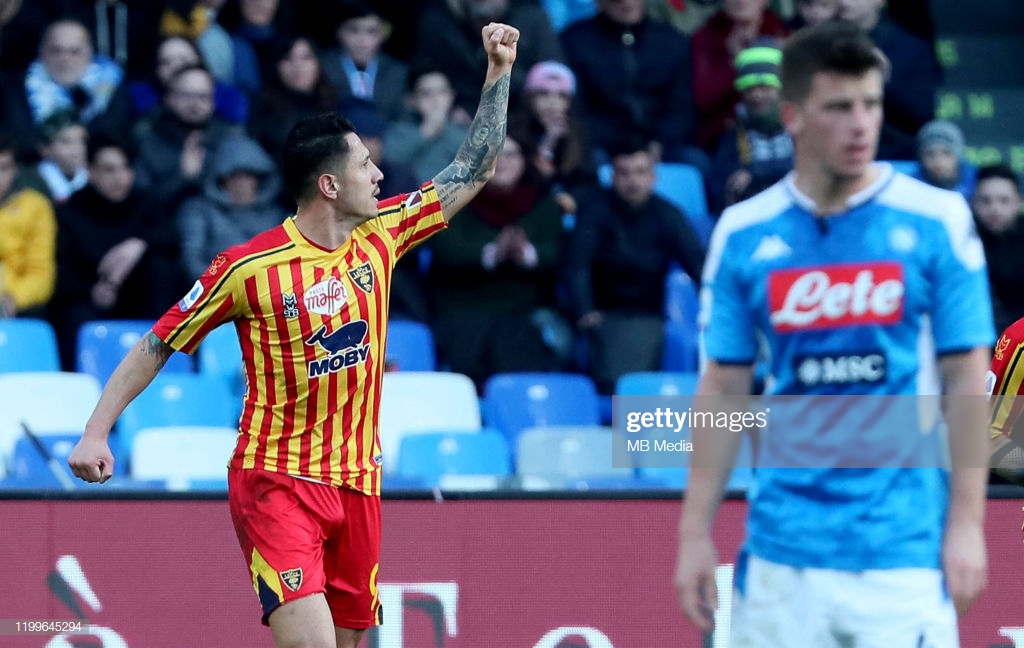 Gianluca lapadula played really influential role in a huge victory against Napoli at the San Paolo. going into this match Lecce a team that had just come up from the second division this season found themselves just one point out of the relegation Zone. Despite putting in relatively good performances occasionally they are still in a relegation battle and they realize that. Gianluca lapadula was the difference in a game against Napoli in which they were big underdogs. This team has gotten points against top teams this season with points against Juventus, AC Milan, Inter, and now Napoli.. Like in many of the games it was a battle  with not much to be given between them but Lecce was at their best this week. Leading in the game throughout and came through when they needed to was Gianluca lapadula as he score two incredibly important goals. One to open up the game to give them momentum and an early lead and then a crucial goal that gave them a 2-1 lead in the second half. They went on to win the match buy a score of 4-2 to as Gianluca lapadula proved his performance in a huge match against one of the biggest teams in Italy. He was without question one of the performers of the week as they defied the odds to beat Napoli away from home. This team is still in a relegation battle but they gave himself a little bit more breathing room with a fantastic display against Napoli. Gianluca lapadula leads his team to a massive three points as they continue to try to survive the season. It was a really special performance thanks as Gianluca lapadula as he shows his quality. He has been really important for Lecce this season. He has scored 7 goals for the newly-promoted side as they are grabbing some momentum at the right time. If he can continue to play well and score goals in the end they will Survive the season his display deserve to be highlighted especially under the circumstances as he earned a spot on one of the performers of the week.

Musa Barrow was Sensational in a big match against Roma. Bologna is in great form and it’s picking up momentum on a regular basis. They’re really starting to look like a team that is capable of getting into the Europa League next season. They have come from mid-table into the top 10 as they now sit behind Roma in 6th Place this would be enough to see their European ambitions come true. Musa Barrow looks like he’s going to give them another dimension. He was one of the best players of the weekend with a sensation was play on the road against Roma at the Stadio Olimpico. One of the performers of the week without question he was just something else especially coming forward. The Gambian Striker was a big problem for Roma as bologna got a shocking victory at the Olimpico. He came forward with pace and athleticism and Roma simply could not deal with it. He end up scoring a vital goal to put bologna back in front after they had just conceded. Scoring a curler from outside the box in to the top the back of the net an absolutely Sensational hit that gave bologna the momentum back in the game. He continued to push forward as he was a nightmare to deal with. In the second half he scored what would turn out to be the defining moment of the match taking the ball from the center of the pitch all the way inside the Box cutting through the defense and calmly slotting the ball into the back of the net to give the victory. He is only played just a few matches for bologna since making his move in January. This was his first start for his new club scoring twice being the biggest difference in the results. He recently moved to Bologna from Atalanta where he was struggling to find playing time. He scored that hat-trick in the Europa League qualifying two years ago and hasn’t really done much since. Last season he scored just five goals but wasn’t really viewed as an important piece of the team. This year for Atalanta he only played seven games as he opted for a move away. He joined bologna on a loan deal with an obligation to buy which could be really important for Bologna’s European Ambitions. He has proven to be a really exceptional player and worked well with Riccardo Orsolini. In a high-stakes game against Roma he was just flat-out special if he continues to build on what he did this weekend this will not be the last time we will hear about him. This week simply put he put together one of the best performances of the weekend as he earned his team a shocking victory in Rome.

DONKEY OF THE WEEK: A.S Roma

Roma clearly did not learn their lesson from the abomination of a performance last weekend. In both of these games they fell behind by multiple goals having to crawl their way back into the match. They had chances at the end of yesterday’s game and the game last Sunday. However they dug themselves into a hole in each of the games and couldn’t get back into it. Defensively Roma over the last two weeks hasn’t been absolutely horrible. I do believe they can turn this around but they have no confidence at the moment and they are not playing well enough to get the job done. If they’re not careful they will lose out in the Champions League this season. With Atlanta now having a three point lead unless Roma beat them next weekend this Champions League spot will become further and further from their reach. This season has gone significantly better the last year but Roma hit a wall and I can’t seem to figure themselves out. The sooner Roma start getting some form and make some improvements the better. Defensively just has been unacceptable Gianluca Mancini is a excellent Defender and so is Smalling but over the last two games they have laid an egg in the performance and haven’t been up to the standard the two of them as well as the other pieces. When Roma was unbeaten in nine matches a large part of that was because of how well they were able to defend especially on the counter-attack. Musa Barrow and Francesco Caputo over the last two games highlighted the cracks of the Roma defense. Both players got out of the counter-attack and ended up with multiple goals. Eliminating the counter-attack may not be something that’s possible but trying to slow it down it’s something that needs to happen. Defensively they’re starting to look like they did last season. I do have faith that Roma can fix this problem but it’s not seemingly getting better may be some changes need to be made in the backline I’m not sure what needs to happen here but this isn’t something that Roma can get used to. Roma are desperate for that Champions League spot and they defend like they have the last two weeks if not going to happen changes as they are the donkey of the week.