Football returned in Germany as the Bundesliga became the one country so far that has outlasted the coronavirus as they returned to League action this weekend. What is a better match to kick things off then the revierderby between Borussia Dortmund and Schalke. The most crucial match of the football calendar in the region. Dortmund came into the game being in the midst of a title race as they look to chase down Bayern to prevent them from an eighth consecutive title. On top of that, they have been a different team since signing Haaland from RB Salzburg. Meanwhile, Schalke despite having overachieved and making vast improvements from last season still with war without a win since January. It was strange not having fans the Derby’s attendance that would have been 80,000 people. Dortmund was in control early, And it showed as they were carrying momentum through each minute of the game, and it showed as they were carrying momentum through each minute of the game. Haaland came close, connecting on a strike from the side of the box that hit the netting. Schalke didn’t provide much, but there was an opportunity for them to even take the lead in the early part of the game as they took two strikes at the Dortmund goalkeeper But ultimately unable to convert. It was one of their few chances all afternoon not long after Dortmund would find their way in front. Following an incredible team goal. Marco Reus set a through Pass into Julian Brandt, who supplied a one-touch move setting up hazard on the wing. A perfect cross from the Belgium as the delivery reaches the foot are the Norwegian Superstar as Haaland put the ball in the back of the net in what was a straightforward goal. It would be his 10th goal of the season in the Bundesliga. He has played just nine games as Dortmund took a 1-0 lead. Dortmund continued to dominate as they took advantage of an atrocious Schalke mistake. The Schalke goalkeeper was pressured as he tried to get rid of the ball. Hakimi picked off the pass before laying it off to Julian Brandt, who set up Rafael Guerreiro inside the box who cleanly converted a finish into the bottom corner to give Dortmund a 2-0 lead. They were starting to run away with it as they looked almost flawless throughout. Julian Brandt seemed to be orchestrating everything. Minutes into the second half a deep pass from the central Midfield organized a breakaway for Dortmund as a Julian Brandt picked out a perfect pass for hazard who stuck it into the back of the net to give them a 3-0 lead. There was indeed gold in the feet of Julian Brandt as he was involved in Dortmund’s opening three goals of the game. Schalke looked uncomfortable disorganized, and we’re never on the same page Dortmund continued to run Riot all over their Rivals. With a little less than 30 minutes to go, Haaland picked out a pass for Guerrero scoring second of the game as he flips the ball over the keeper into the back of the net in what turned out to be a 4-0 victory. Dortmund was Flawless; they may need some help, but it is clear as day. The title race is on. 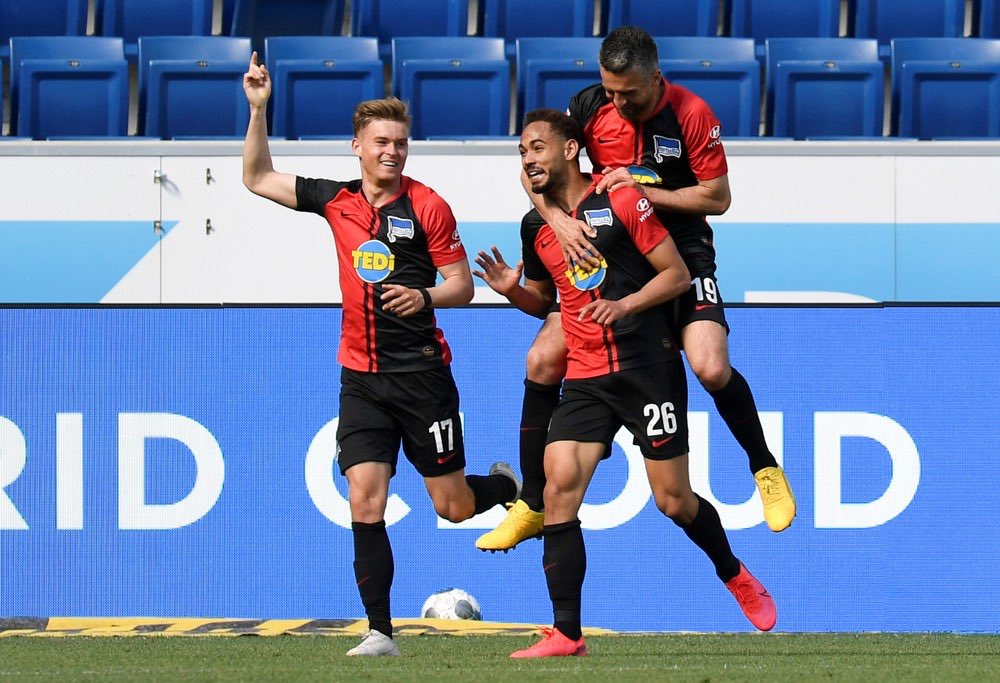 We saw a battle between Hertha Berlin and Hoffenheim; both teams were within reach of each other in the league standings, having Ambitions of pushing the top of the table with an outside chance of getting into Europe. It was a back-and-forth first half with many possibilities coming for both sides. However, Berlin did seem like the stronger side with more high-quality chances with many opportunities to take the lead in the opening 45 minutes. Still, the goalkeeper was on his day for Hoffenheim, denying Berlin of several chances. Berlin had the momentum, but Hoffenheim had a great chance at the end of the first half, but they were unable to convert on a sure-fire opportunity to take the lead. Hoffenheim, in the first half, you could visibly see they were struggling without their Star Andrej Kramaric. It was a goalless draw after 45 minutes, but in the second half, Berlin started pulling away. In the second half Coming off a cross Berlin Struck from outside the box, taking a slight deflection Landing in the back of the net as Berlin took a 1-0 lead. Hoffenheim, we’re unable to react and adjust. Berlin ended up catching them sleeping they hit a perfectly timed cross from the wing into the box. The striker connected with his head into the back of the net again as Berlin took a  2-0 lead. Then Late in the match, Berlin put the game away once and for all and what was the best goal of the returning weekend. Matheus Cunha who is backed into a corner by the Defender pulled off reminiscent of the Cruyff Turn spinning around the Defender as he drove into the box before striking the ball into the back of the neck to give a Berlin a 3-0 victory as Berlin picked up a massive three points with a second-half explosion. 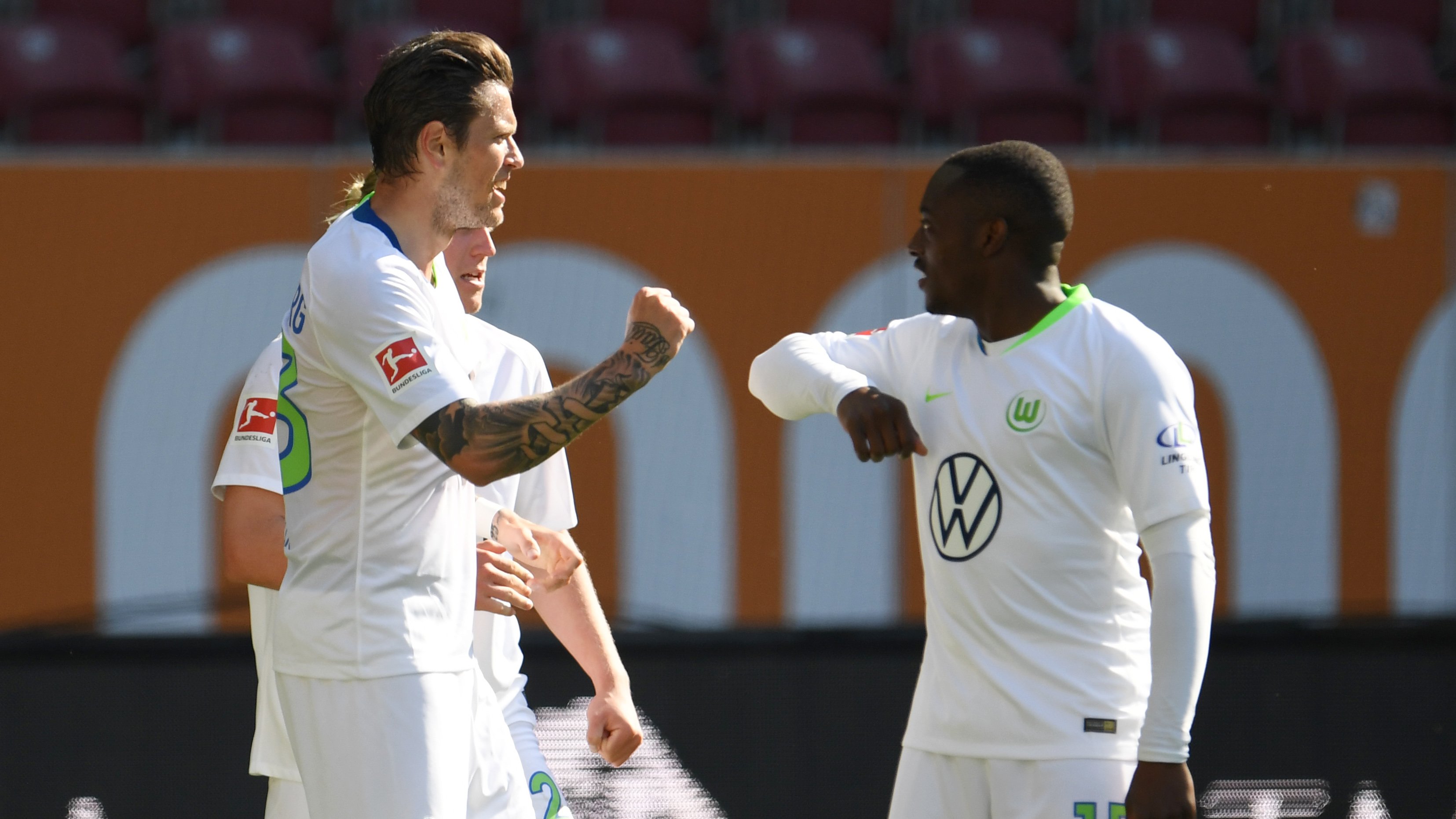 In Augsburg this weekend, we saw the most dramatic and cinematic match as of the Bundesliga returned. Augsburg hosted Wolfsburg in what turned out to be a must-see Clash. Augsburg is gaining points trying to get themselves out of the danger zone as they said just a few spots above the relegation zone. Meanwhile, on the other side of things, Wolfsburg is looking to gain momentum in the European race as they look to obtain Europa League qualification at the minimum. This was such a back-and-forth battle between two teams that just didn’t want to give up. There was no real Superior side throughout the entire match, even if the result was not even. In the first half, it indeed was a battle. Augsburg nearly scored after striking on a volley coming off a set piece; however, the Wolfsburg goalkeeper kept the ball over the line, denying them well would have been an outrageous strike from The hosts. Less than 10 minutes later, on the other end, the Wolfsburg did the very same, but an Augsburg Defender got in the way of a malicious strike as the scores remained even. It continued to be a battle, but eventually, it would be Wolfsburg who pulled in front right halftime. A deep cross coming from nearly 40 out found the head of Steffen. He connected on a header from well outside the box that ripped through the top Corner in what was a world-class finish. From the build-up to converting on the cross as Wolfsburg took a 1-0 lead. Just 8 minutes into the second half, Augsburg found the equalizer as John Brooks displayed atrocious defending nearly putting the ball in the back of his own net to allow them to get back into the game. For much of the game, neither side really showed superiority. Then drama occurred in a matter of minutes on two different occasions. Wolfsburg took the lead before the goal was wiped off due to offside and then on the other end shortly after Augsburg took the lead before the goal was taken away. However, late in the game, Augsburg did seem to be the better team and had momentum going for them. Late in the game in the closing moments, Wolfsburg found a late winner in the 90th minute. Daniel Ginczek, after having just come off the bench, sticks his foot out from a cross coming from the opposite side to tuck the ball into the back of the net to earn Wolfsburg a late winner. Augsburg has to feel dejected after outplaying Wolfsburg for most of the second half as the result may not be something they Deserved. Wolfsburg wins 2-1 strengthening their European Chase.