The day we have been waiting for a long time is on the horizon. After three months without any football we are finally getting a return of football in Italy. After many discussions in regard to the representatives of each team as well as the Italian government. That included proposals of a playoff as well as finishing the final 12 games of the season. Italy has been the harshest victims of the coronavirus and many players throughout the League’s teams have contracted the virus. It is a day that we didn’t think was going to come at least it felt that way. Eventually, the Italian government approved the committee’s decision to continue the rest of the season. With the final 12 games of the Season occurring shortly. There will be a late start to the following season as well as a different start date for the transfer window becuase of this. This week we saw Napoli and Juventus advance to the Coppa Italia final that will take place this coming Wednesday. The league is set to return in about 10 days from now. As you can expect there will be no fans in the stands but at least we have our football back. When Roma left off several months ago they were not in the best form but they were starting to gather some momentum as they chase down Atalanta for the final Champions League spot. Its unclear what the effects break will have on the teams but it could be a blessing in disguise as they did not have a lot of momentum. Roma will host Sampdoria on Wednesday the 24th in the capital. Roma and Sampdoria battled earlier in the season in Genoa in what was one of the most disappointing performances of the Season as Roma and Sampdoria played out a 0-0 draw. In that matchup, Paulo Fonseca was serving a suspension and was unable to be on the bench. The situation is completely different now and it’s unclear what we will see in Rome next Wednesday. It should be a spectacle even if there won’t be fans in the stands. It’s unclear whether that will be a positive or negative impact on the performance. Football is finally back in Rome as they will continue to fight through the final 12 games of the season as they will welcome Claudio Ranieri and Sampdoria to the stadio olimpico will the lack of fans give sampdoria a puncher’s chance to get massive points as they look to fight their way to safety? or Will Roma despite the circumstances still show their superiority at home we will find out when these two teams go head-to-head next Wednesday in Italy’s Eternal City.

The coronavirus, in some way, has benefited Roma’s injury situation as Nicolo zaniolo and Adamu Diawara have both recovered from their injuries during the time off but still are questionable to play. In addition to that, Roma has managed to extend the loan deals of Chris Smalling, and Henrik Mkhitaryan as the Rome-based Club still looks to negotiate permanent transfers on both of them. It’s tough to say how Paulo Fonseca as a side will line up ahead of the match. Paulo Fonseca, for the most part, has stuck with the 4-2-3-1 formation this season. The personal will remains up in the air with everything that has gone on. In goal as always should be the Spaniard Pau Lopez, who was Nursing & Injury, but by next Wednesday, he should be completely recovered and to go. The backline should remain somewhat similar to what we saw before the break. At left-back, we should suspect to see Alex Kolarov. Beside him, the League’s best center-back Partnership of Gianluca Mancini and Chris Smalling. Then operating at right-back could be several different options, but given Roma’s lack of depth in this position, we should see Bruno Peres, who has somewhat been a surprise selection for Paulo Fonseca. In Roma’s defensive Midfield, we should see a similar pair that we have seen at many points this season. Bryan Cristante alongside Jordan Veretout seems to be the logical pairing for next Wednesday’s game. However, I think there is a chance that Gonzalo Villar could make a start against Sampdoria. In contention for the central Midfield Position will be between Hendrick Mkhitaryan and Lorenzo Pellegrini. I believe Lorenzo Pellegrini is the more logical choice given the scenario. On the wings, we should suspect to see Justin kluivert and Carles Perez in the attacking positions on the outside. The youngsters could be essential. Then upfront as the central Striker should be none other than edin Dzeko. There’s not another player in that position that makes in this spot. As always, the team will have options on the bench with Gonzalo Villar, Mkhitaryan and others 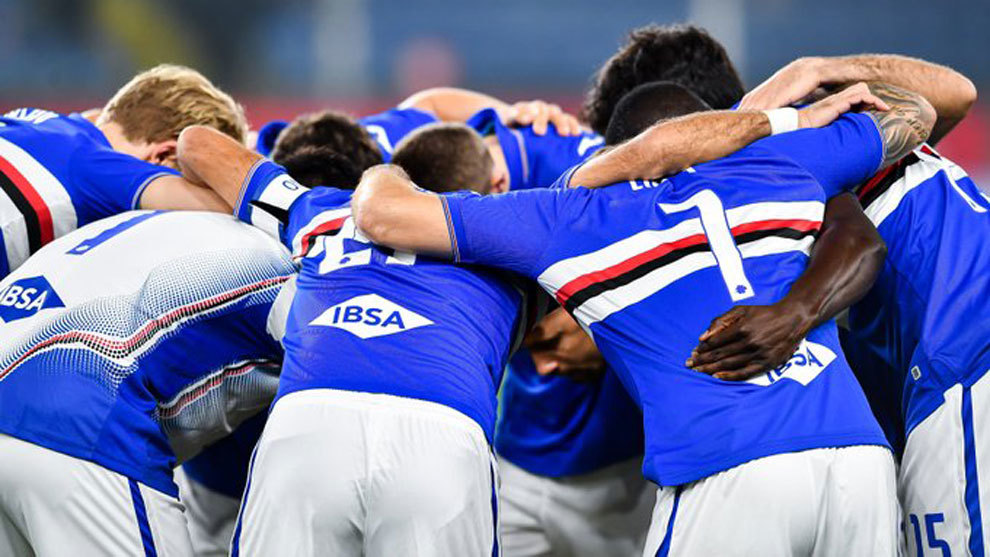 Sampdoria has been one of the teams that were the most effective from the coronavirus. Over 4 players got contracted at some point. From the Tactical approach, Claudio Ranieri could make adjustments. There’s always a chance of that, but I believe that it’s unlikely he will rock the boat too much. We should see a very similar team to what we have seen in this season with this team. The 4-3-3 could leave them a little bit too exposed, and a 4-2-3-1 may not be the best idea given what Roma is capable of doing. The best option at this point in terms of the lineup is 4-3-2-1 formation. It will give Sampdoria the security with three defensive midfielders with the one in the central position pressuring forward and in front of the two attackers who will sit under the striker. From the tactical perspective, this makes the most sense even if Sampdoria loses this game; they have to show some improvement or this season is already over. It will be challenging to win this game for them, but whether or not they put in an excellent performance will largely depend on the lineup. The key player for Sampdoria is Rigoni he’s a younger player who’s capable of scoring goals when given the opportunity I don’t believe in Fabio at this age I don’t they will have to ride their younger players to get to the Finish Line Fabio is capable of scoring. Still, Sampdoria cannot rely on him, which is why they got into this situation in the first place. A lot needs to happen for Sampdoria to, but under the circumstances, they might have a chance.

A match like this is increasingly difficult to predict. Obviously, Roma will be looking for Revenge for the lack of conviction that had in the previous matchup. However, given the situation, it’s going to be unprecedented Waters. Sampdoria sees themselves deep at the bottom of the table. They are looking for their own Survival because I believe in the end it will be between them and Genoa and Lecce one of these teams will be going down this seasonLecce may be in play, but I just believe they are the better team out of these three, so it’s going to come down to one of them. Sampdoria desires to get out of the situation. Meanwhile, Roma wants to get back into the Champions League this season and even though it seems demanding, they’re still going to do everything they can to pick up as many points as possible. You can look at this matchup from a tactical perspective. Roma is significantly the better team even though they only managed a draw last time against them. From top to bottom, they are much stronger in most areas. They can be especially dangerous at home; however, the atmosphere will be non-existent, and that might benefit Sampdoria. I believe they also have a matchup advantage in the coaching Department. Paulo Fonseca right now is a much better man than Claudia Ranieri despite the qualities he has. This match on paper looks like a routine Roma victory. However, given the scenario, we have ourselves in, it’s not that simple. Both teams have been training for several weeks now, but they have not seen live action at any point, and this will be their first game in months. We have seen both sides of this coin. Over the last few days, we saw the Coppa Italia semi-final matchups with Napoli and Inter Milan looking rather impressive considering the lack of games they have played in the previous couple of months. Meanwhile, Juventus and Milan showing significant rust. It is impossible to see how each team will react when they play for the first time. As I mentioned, the atmosphere that Roma would provide with fans in the stands is going to be completely different, so strangely Sampdoria has an opportunity to do something. However, equally, Roma has a much better team, which gives them the advantage. Matches like this are just tough to predict because you don’t know how these teams will look coming out of the gate. I think it could take a while for both these teams to grow into the game. It seems like neither side will be mistake-free given how long it has been since they have. A match like this will benefit the players with experience, which is why edin Dzeko could be vital. It seems like he will be the critical vocal point for Roma. This game could go either way in this match, but given the fact that points are so valuable to Roma coughing up a stinker could cost them Champions League football, they probably don’t get it anyways, but they have to give themselves a chance. With Sampdoria even though they need points, it just seems like the desire will be less given to have other teams who are struggling even worse than they are. It’s unclear whether being at home is going to benefit Roma in any way because of the lack of fans, but again, it is their home stadium that they’re used to playing going on the road immediately even without fans can be difficult, and I imagine it will be. Roma does have the better team, and I think they will be ready for this matchup; they will be concerning factors on both sides of this, but I believe because Roma has a better all-around team and they desperately want to make amends for what happened last time these two teams matched up. Roma should be the favorite, and I think it’s highly likely they take up all three points even with that being said it will be a tough match as Roma have to fight for their points. Still, they just need that momentum early, and every player in that locker room understands that importance. I see Roma picking up three points in what will be an interesting matchup as they need to set themselves in the positive light if they want to chase down Atalanta getting massive points here is the best way to do that.

4 thoughts on “Serie A Returns: Roma vs Sampdoria Preview #828”