Notre Dame is going through a difficult transition over the last few years. Paige Peltier is an incredibly high rated Prospect with immense Talent she is all the possibilities and capabilities of being a star at the next level. It’s really hard to really predict what will happen because it is the most difficult transition. The speed of the game in college is just at another level from high school. I believe Paige Peltier can be a superstar in college it might take some time to develop and improve on the things that I’ve just mentioned but if she works hard she can be a superstar just like she was in high school. Cretin-Derham Hall has never had a better player she was celebrated and glorified at cretin-Derham Hall. She was the biggest star on campus at least she was among them. In high school, she was queen being one of the best players in the history of high school soccer comes with the praise and people around you constantly telling you how great you are. She is entering a totally different situation. She certainly can be the queen of Notre Dame but it’s going to take a lot to reach that level given the differences that she’s going to face over the next two years. Notre Dame in a is a program that there’s always a lot of expectations on them to do well. These expectations will be put on the shoulders of the recruits. Both of her parents went to Notre Dame so the Irish culture is probably something she will be able to adapt to but the college experience will test her mentally physically and even emotionally the pressure she’s going to face is nothing compared for what she has had to deal with in the past. The fans of Notre Dame expect greatness every season even if it’s not realistic that’s just the way Notre Dame fans operate because they’re so used to winning. Notre Dame is not in a place where they were a few years ago. Notre Dame had one of the greatest coaches in the history of women’s college soccer. Randy Waldrum has over 400 wins he won seven Conference titles who national championship in 2004 and 2010 and was runner-up twice in 2006 and 2008 he was King of the program since he left they haven’t gotten past the sweet 16. Nate Norman is the current manager of the team. His record is 19 wins 18 losses and two draws. Just barely skating above 500. On top of that, there’s Notre Dame team has been flooded with injuries over the last couple of seasons which is why Paige may have a chance to play solid minutes this season given what the team has to offer. However, she will be just another player at Notre Dame. I have faith that she will reach her potential in college and continue to grow in her career however she will be a player that will be mainly a spark plug. One of the things I admire about her mentality she could have gone to a school with less prestige where she could play more regularly but she took a challenge at Notre Dame she may not play every game she could have gone to certain schools where she would have been the star player. This tells me Paige wants to learn and adapt to the circumstances she understand what she needs to do if she focuses enough she can achieve what she wants. During her freshman year Paiges, best bet is to take in everything she can from the players that are around her. Girls that will teach her how to handle the speed and pace of college soccer and learn about her responsibilities on and off the pitch as a freshman I do feel that she’ll be able to play a lot of games and potentially break out into her stardom however Notre Dame is a tough situation and it may take some time before she explode onto the scene something very reminiscent to how her High School career went. The team may not have done well over the last two seasons but Notre Dame has some serious Talent on their hands some girls that may even play professionally maybe even ones that will play on the national team in the future. Maddie Mercado is one of the best midfielders in the conference she had played for the under-19 Women’s National Team she is the player that makes everything happen for Notre Dame. They also have Brianna Martinez who has also played on the national team both for the under-20 and under 19 sides. Both girls have played in the concacaf tournament last summer. Maddie and Brianna are the most key components of this team Maddie is the Mastero in the Midfield while Brianna is the key of the backline. There are other components as well to this team Paige will have to learn from all of them to become the Superstar she is capable of. It is going to be a very challenging experience for her but once she starts to grasp the differences I think she’ll live up to the challenges and expectations that will be put on her shoulders. It is unclear how much he will play this season but if she gets the chance she will show everyone who she is. Notre Dame is a great place for her to learn how to be more of an all-around Striker someone that can impact the game in so many different ways like I said if she’s able to be more selfless and become more than just a goalscorer she will be truly remarkable for Notre Dame if she wants it bad enough by the end of her college career she’ll make everyone remember her. 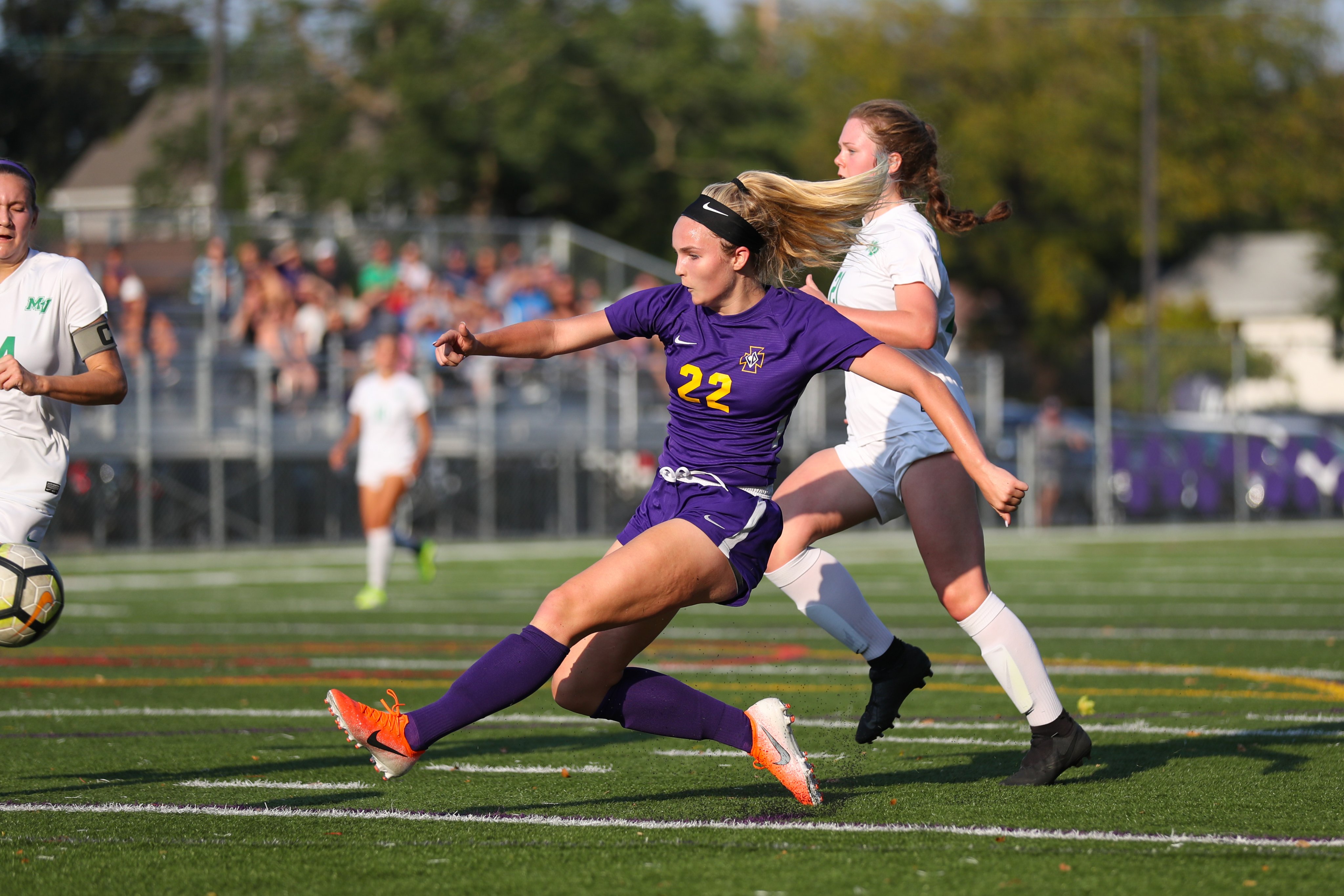 Paige could potentially be the missing piece for the Irish. There’s no doubt in my mind that she’ll become a superstar at the college level when she has her opportunity. Paige was a high school rival of my gal Kayla Anderson. Even if this is true I want the very best for both of them. There is nothing more that I would like as a fan of both of these young women to see them on that stage again competing at a high level. Even if I worked for Kayla I’m a fan of the both of them I want Paige becoming the best most well-rounded player as she possibly can become. At the striker position, I think she has an incredible future ahead of her. I keep bringing this up but the size after 5 foot 11 frame makes her as explosive as anyone at her position potentially. Being around creative players at college like Maddie Mercado in the Midfield how to become that player that coaches try to stop. She truly has capabilities of becoming a world-class player not only at the college level but beyond. Potential that she has endless it will all come down to her ability to become an all-around player but if she’s at able to attain that she will be very difficult to deal with. She is already difficult. But it would only intensify that situation. Paige is a pure goal-scorer with size and athleticism to give Defenders nightmares. Her mentality is to come through in big moments she is so dangerous in The cutting Edge the knife side of the game. She’s not a player that’s a really going to be bothered in the defensive Midfield position she wants to attack give me me the ball in the space where I can be effective and I’m going to score. She does need to adjust a little bit and become more of a more willing passer but by all this, she is as gifted as a goalscorer as I’ve seen in this state. Once she gets into a position to score sometimes it just feels like a foregone conclusion. In football, she can make it beyond the college level. I could see her lining up Playing For Real Madrid or Barcelona this is her ceiling. I think she’s even gifted enough to get to professional soccer on Talent alone. However, if she develops an insane work ethic and prioritizes her playing career over friends relationships and everything else in her life she could honestly become one of the best players in the world. It isn’t impossible to see Kayla Anderson and Paige go head-to-head on the biggest stages. The potential of these two is just extraordinary. I believe one day they will be head-to-head once again in the pros and line up as teammates with USWNT. Having potential is great but whether or not you lived up to it is up to her. She’s able to improve on the things I’ve mentioned in this article there’s no doubt on my mind she will play in the World Cup if you want it bad enough it will happen.