Theo Hernandez is one of the most exciting players to watch in Serie A. It is true at times. He can be somewhat one-dimensional. Theo Hernandez isn’t as good as people make him up to be; he isn’t a world-class player, but it’s still a tremendous Talent and deserves recognition. My issue with Theo Hernandez always has been his inability to defend. As a left-back, you want to be able to push forward and defend at a similarly high level. He can be a defensive liability, but I’m not suggesting that he is not a high-functioning Defender who can’t do the job. I just am someone who always looks at his position and wants a more or less 60-40 split between defenses and attacking qualities. It’s a different world we’re living in now pushing forward; it’s a different age of football, and we’re starting to see slight improvements; he still got a long way to go to become the best left-back in the league. However, Theo Hernandez provides the spark in an AC Milan team that needed it at the time. Is Theo Hernandez somewhat responsible for some of the goals they concede? Absolutely, but he brought them to a different place AC Milan was starving for a superstar, and he has given them a sense of energy. He has been such a weapon; he had the pace, has the athleticism, has the attacking mentality. If he can defend at a higher level, he can be a fundamental problem for the teams he plays against. It was another week without Ibrahimovic, and they were crossbar problems in the match against Parma largely contributed to what occurred. However, an underutilized Parma team went took a 2-0 lead against AC Milan. However, unlike in the game against Verona is Ibrahimovic was not there to bring them back. Theo brought AC Milan back and rescued them a point. A malicious strike from the foot of Theo Hernandez got AC Milan back in the game. Then in stoppage time, Theo Hernandez again benefited from his initial shot hitting the crossbar, but on the second attempt, he drilled it in the bottom corner to keep AC Milan unbeaten this season. I said a lot of things about Hernandez. I struggle with his lack of defensive ability; it’s something I struggle with mainly because I know how good he can be, but if you’re talking about attacking full-backs, he is one of the best going he provides so much in that area it makes AC Milan such a problematic matchup especially when they’re at full strength. This week he was sensational Theo Hernandez brought AC Milan back as they avoid defeat to keep their unbeaten streak going this season.

Lorenzo Pellegrini is starting to become one of the most underrated and underappreciated creative midfielders of Italian football. He is starting to become a superstar under the radar. He doesn’t have the flashing numbers as some other creative midfielders like Bruno Fernandes, who you just look at the statistics, and you’re Blown Away. However, Lorenzo Pellegrini is better than Bruno Fernandez and a lot of players at his position. His creativity is significantly Superior to most of the midfielders who’s seem to get the praise and acclaim. He should walk into with Italy 2021 Squad for the European Championships this summer. He provides the creativity that even Nicolo Barella and Sandro tonali do not have. In contrast, those players have a specific skill that Lorenzo Pellegrini Lacks. His creativity and passing ability are some of the best in Europe. Last season he played in an incredibly attacking role a lot of the time underneath the striker, supplying those moments for edin Dzeko and others. He was one of the assist leaders last season, and even though Lorenzo Pellegrini only scorers a limited amount of goals, that is primarily due to his role. There’s not a midfielder in Italian football that has had to adapt more consistently than Pellegrini. Last season his assist numbers were significantly mainly spiked because he played in an attacking role. While this season, it has been mostly defensive. He is very versatile in his ability to push forward, play the attacking Bowl, and sit back and dictate defensive space to make tackles and interceptions that can sometimes be a security blanket to the backline. He can play both positions attacking midfielder or defensive. He is one of the most complete midfielders in the league. Lorenzo Pellegrini is a Future captain and is on the verge of signing a new contract with the club. This weekend against he was world-class. Roma’s entire operation just ran out to this massive lead and never let it down. He is the catalyst of Roma’s attack. Often, he creates momentum and energy from a defensive position, pushing forward into the attack, which makes Roma such a counter-attacking team. Lorenzo Pellegrini can hit you with some short and the long pass up the middle; his variables of what he can do with the ball are outrageous. However, against Bologna, he scored; he is not a midfielder who scores a lot, so he doesn’t get the respect he might deserve. He played beautifully, getting into an onside position by himself, striking from outside the box to make a big difference. He also was largely influential on several of the first-half goals. He sent a perfect through-ball inside to edin Dzeko, who found the space to convert the goal perfectly placed, giving the Bosnian the greatest chance of success. Then vastly influential on Jordan veretout scoring as his pass set up henrikh Mkhitaryan for the pass. He dictated everything they want forward; he controlled the game, made tackles he dictated the entire point of attack, and really put together an outstanding performance. When Roma are back at full strength in the attack when Pedro Rodriguez comes back, he will drop back to defensive Midfield and do the Dirty Work he often does, but this was just a game that highlighted his attacking ability even if it’s not on display regularly he’s got in his bag Against Bologna, it was a nearly perfect performance from Lorenzo Pellegrini. 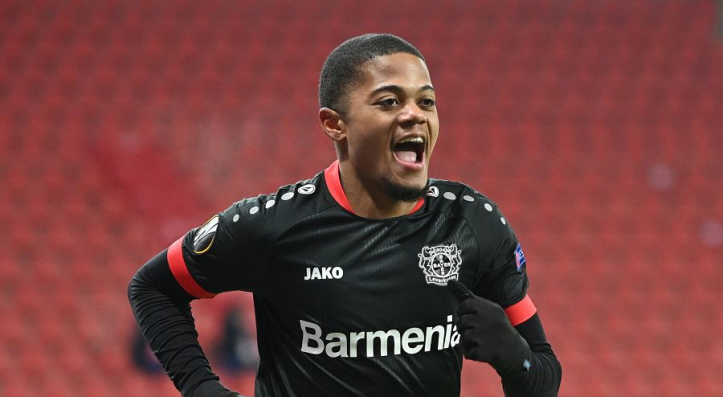 A few years ago, Leon Bailey was expected to be one of the hottest prospects in the transfer market. The Jamaican athletic Winger has been a big reason behind Bayern Leverkusen’s success. He is not a player that produces a high number of goes each season but is on pace for his career’s best goal total. He is a Winger that’s more induced by supplying crosses from the wing into space than being an all-out goal scorer. Still very valuable and incredibly quick athletic and has the qualities to be one of the best at his position in the Bundesliga. This season he is taking it up or not, and this week alone was only further highlight of that. He scored a brace in the Europa League Victory against a Slavic Prague and only continue that run of form in the Bundesliga as Bayer 04 went top of the table as Leon Bailey did not disappoint. Just three minutes into the game, he scored one of the best goals seen this season. On a corner kick cut short that Jamaican Winger must have had a rocket fuel in his boot as he hit a curler from a complicated angle outside the box into the top corner giving the goalkeeper not a chance in the world to save it a perfectly hit strike that left us in awe. He would get a brace again after A Mistake by the Hoffenheim Midfield supplied a back to the goalkeeper, but before it got there, Leon Bailey used his speed and athleticism to get to the ball and to pass it into the net from outside the box to score his second of the game. He has been one of the best players in the Bundesliga this season, and it’s doing it under the radar. He has already scored nine goals and five assists this season; is highest goal total of his career is 12 goals during his second season at Bayern Leverkusen. This team was very much orchestrated through Kai havertz, who left for Chelsea in the summer. This left Lucas Alario Leon Bailey, Florian Wirtz, and Patrik Schick responsible for carrying the attack. Leon Bailey has become a much more refined player in the Bundesliga; it is too early to tell with the Bayer Leverkusen can maintain this, but if Bailey is playing like this, they’re always going to have a chance to lift the trophy. In the Bundesliga but in the Europa League, they will be involved in the title chance, and it’s even more impressive considering what they lost last season. Leon Bailey is leading this team to Uncharted Territory; he was Sensational this week not only in the Bundesliga but in the Europa League; this team just keeps pushing that envelope, and as long as Bailey keeps playing like this Bayer Leverkusen will always have a puncher’s chance to get across the line.