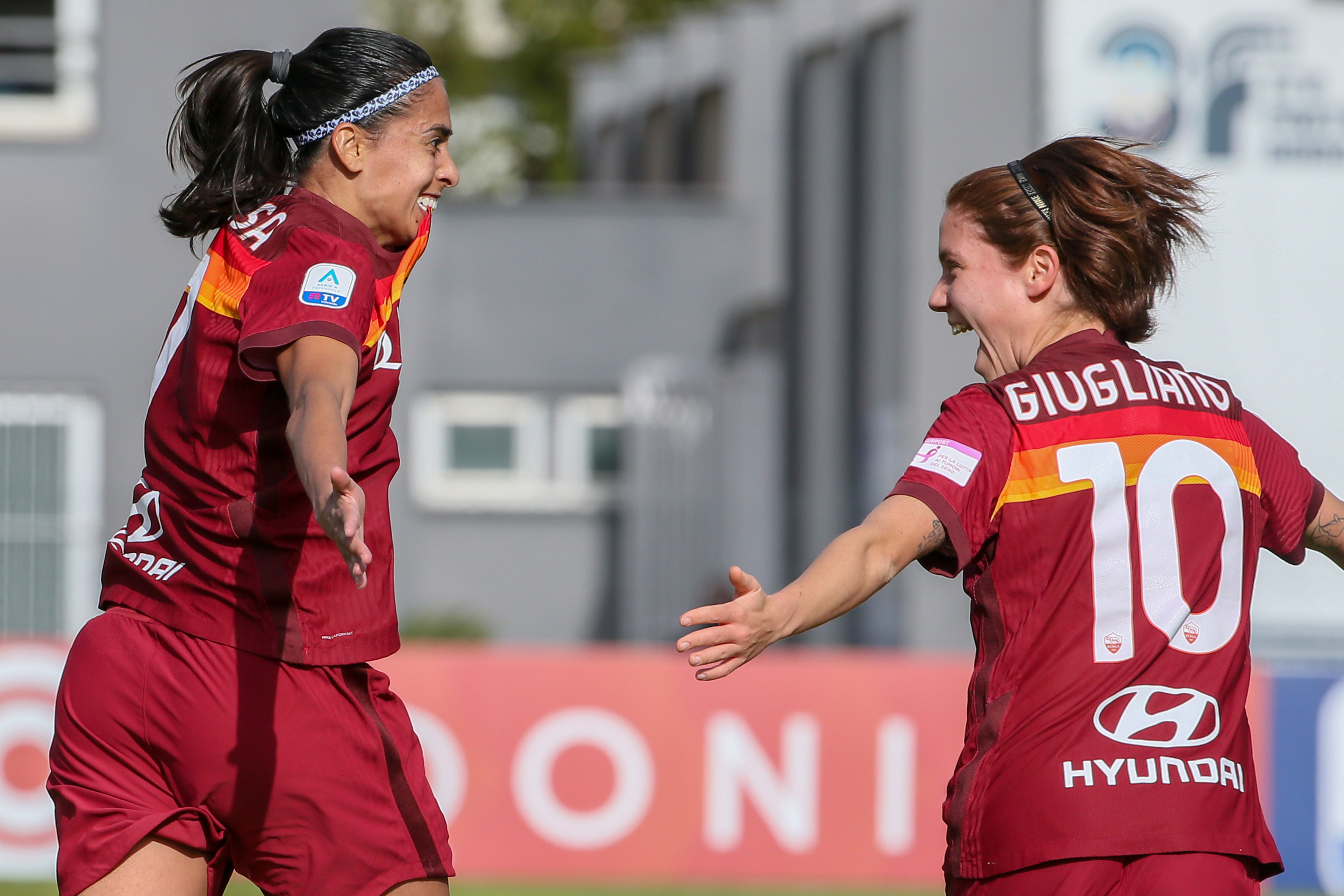 The Roma women came into this season with the expectation of at least trying to attempt to challenge AC Milan and Juventus for the league title this season. Things have not gone as they would have liked, as this team has been somewhat one-dimensional at different times this season. From just a talent point of view, they are right up there with the very best in Italian football. They may not have the connectivity or the right leadership that Juventus and AC Milan, and even Fiorentina possesses. Nonetheless, there has been an inevitable disappointment and how the season has gone. Things appear to be getting back on the right track, though. Their Ambitions were to try to finish at least in the top three this season that seems like it’s going to be a difficult task at this point. They find themselves six points from the top three this season. But with all this being said, they had an opportunity to mount a huge challenge against a Sassuolo team within distance of a second-place finish this season, which would put them in the Champions League. This Sassuolo team is a team that has the ambition the quality, and leadership to potentially find themselves in the Champions League next season. This would be a real challenge, and beating it seem like this would make a huge statement. Prior to last weekend, Roma had not tasted victory in quite a while. They have been suffered from ACL injuries and could not close games indicted of chances that they seem to miss. Last weekend they won the first-ever Derby Del Sol against Napoli. However, that situation is different because Napoli are the worst team in the league, and on top of that, made Roma work for it as Roma conceded set pieces that should have been avoidable. This is why the match on Sunday was going to be hugely important. Serturini has been the team’s biggest component; usually, Roma does not perform well when she doesn’t score. Pamela Lazaro is a capable goal scorer but has not seen the back of the net in several games, so this was very concerning even with the situation. It was hard to imagine how a team like this would take down a team that is within the distance of the Champions League; however every dog has its day. The match kicked off, and surprisingly Roma seemed up to the challenge as they were searching for their second victory in a row. This Roma team has not had any big winning streaks whatsoever, so getting the points here would have been important. Roma was taken out in the box in the opening minutes, but the referee did not react or give a penalty; however, Roma hit back a minute later as they grabbed a shocking lead. Manuela Giuliano cut into the box before supplying a curler into the back of the net as Roma took a surprising 1-0 lead. It was a more or less even match for the majority of the first half; both teams had their opportunities and chances. It was somewhat balanced, but Roma did seem to have this light momentum, which is slightly surprising given the positioning of their opponents.. just a couple of minutes past the 20-minute, mark Roma came close yet again a well hit free-kick from Andressa Alves came within inches, but the goalkeeper made the save forcing the corner. On the corner, the cross was cut into the box before Pamela Lazaro got her head to it rather close but misfired. There’s no question that Serturini is the team’s best player, but Pamela Lazaro is the most complete striker and most dangerous finisher on Roma. She needs to get back in the form she was scoring more or less regularly at the beginning of the season; she’s so talented and deadly in front of goal but we haven’t seen that from her and quite a few weeks if Roma wasn’t a serious chance of chasing the top 4 she needs to start scoring again. She has the ability and capabilities to get back on track; where Roma finish this season will depend on whether she can get back to the way she was playing at the beginning of the season. Roma continuously was on the verge of breaking down the opposition, and then late in the first half; the Brazilian Andressa Alves answered the Bell. In a chance created by Roma Inside the Box, the goalie punched it out, trying to clear only falling to the Brazilian’s feet; she hit it on the first touch as her strike found the back of the net Roma opens up a 2-0 lead. Just before the end of the first half, the visitors tried to respond a very close chance to get them back into the game, but a save was provided by the Roma goalkeeper as the first half ended with Roma having a 2-0 lead thanks to Manuela Giuliano and Andressa Alves. 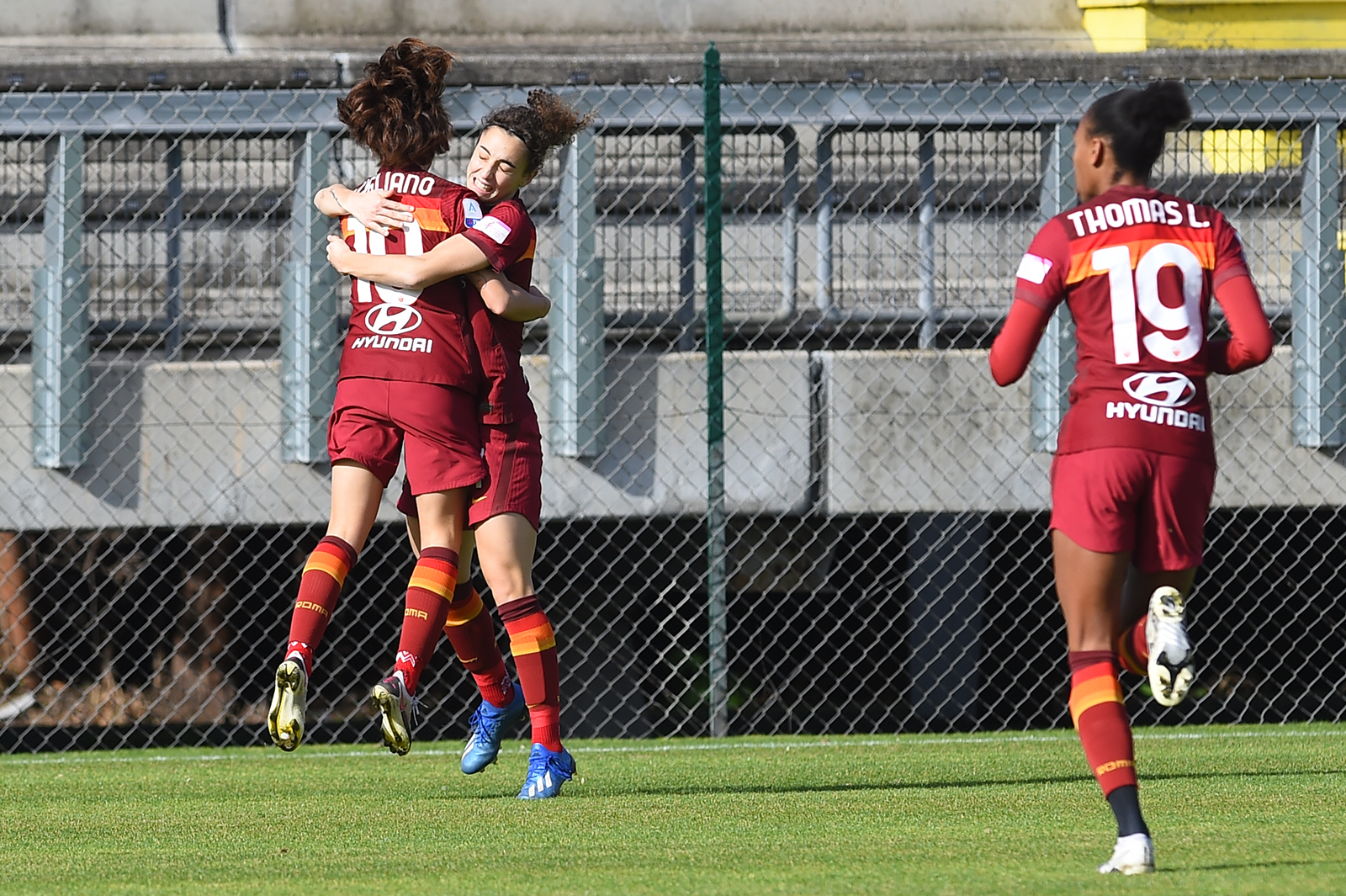 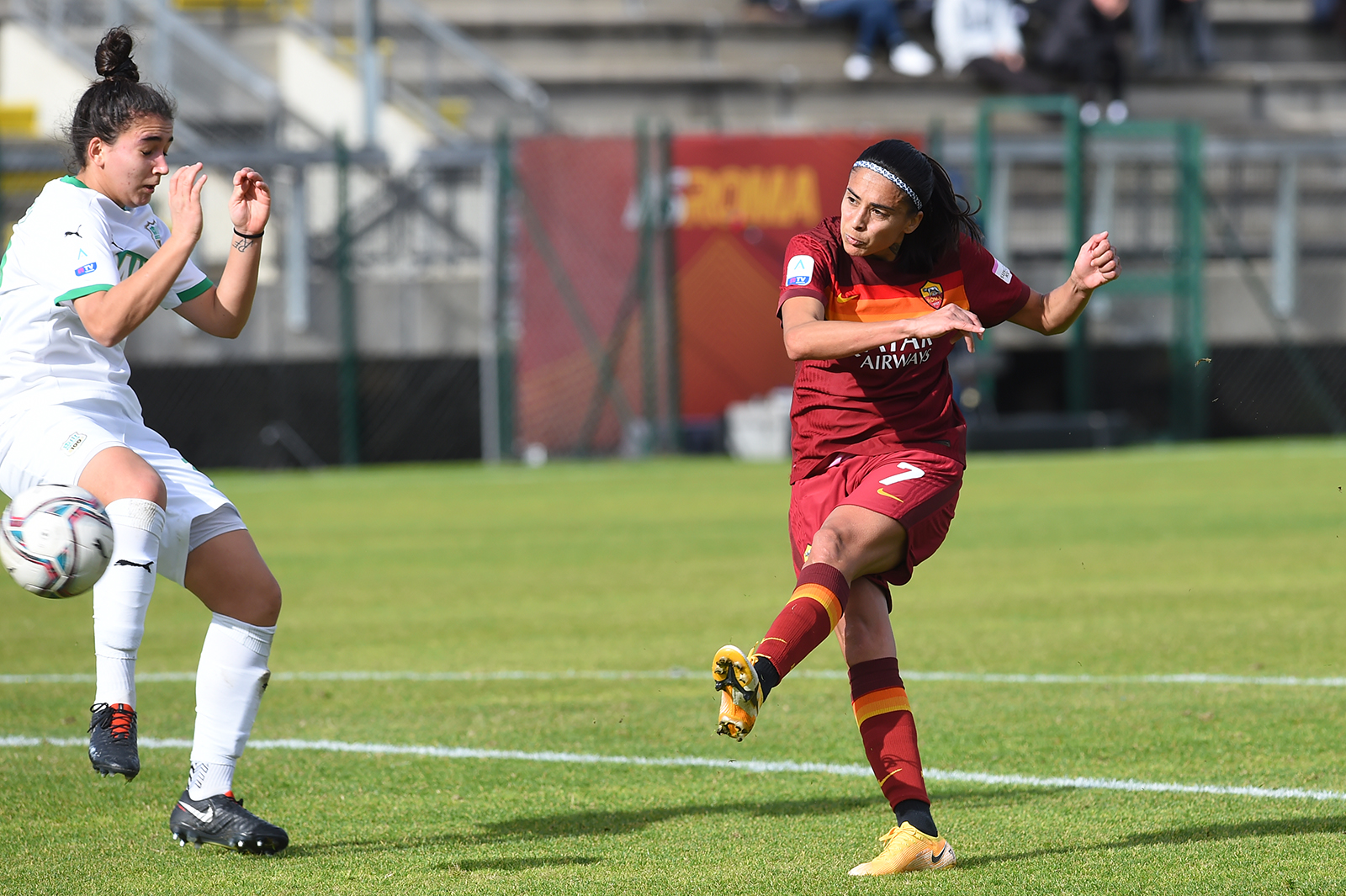 Roma built a 2-0 lead against the number three team in the league. A team that is chasing the top two for the title and unfortunately, for that Champions League spot. A team that by all extensions has proven over the game this season is significantly more complete and a better team from Roma. The most significant difference Roma at least in the first half, with how well they defended. Roma’s new signing made her debut, and it certainly appears it has worked out thus far as Roma have closed off any real chances from the opposition. However, this was still a really strong team, and it was going to take something special to pull this off. Roma has thrown away leads all season; this was an opportunity for Roma to prove that they have what it takes to keep things going. If Roma can get on a run, maybe they can Propel themselves beyond the mediocre season that they have had so far. Perhaps proving they are not wholly dependent on Serturini. They continue to be a battle that one back and forth between the two teams, most importantly Roma. Were just trying to see this game out while the visitor is attacked with great succession. They nearly got back into the game things became a little chippy near the 70th-minute Sassuolo had two legitimate chances to score however, Roma’s goalkeeper stepped-up twice, making a double save in what they’re only seemed like it could have been a goal for the visitors. The moment crumbled them, they had all this momentum driving them, and becoming so close to scoring and getting back into the game disrupted their Spirit. Roma even had opportunities to extend their lead even further. In sequence, you can highlight what Roma is good at and what they struggle within the same Counterattack. Roma got forward with Summit succession with three minutes remaining cut into the box but supplied an atrocious finish. Then in stoppage-time, something very similar but lacks the execution to extend the lead even further. Two very disappointing moments, but it didn’t matter because Roma managed to hang on the beat the number three team in the league. Roma picks up back-to-back wins for the first time this season. In addition to that, this was the first victory in which Anna Maria did not score. This team heavily relies on their two attackers Serturini and Lazaro was all had moments in this game but she failed to find the back of that again, something that she will work on to fix. I expect her to find her the back of the net sound. However, neither scored in this game; they got production against one of the best teams without them. Roma stand 6 points out of the top three; they still has a mountain to climb, and they’ll need to maintain momentum, but their ability to get points against a team like this shows that progress if they could play the way they did this week the rest of the season they should be a title Challenger next year. The problem may have had it inconsistency at their best they’re challenging to defeat one of the most teams in the league; they just need to figure out a way to put it all together over the last two games they have certainly done that the question is can they keep this going. 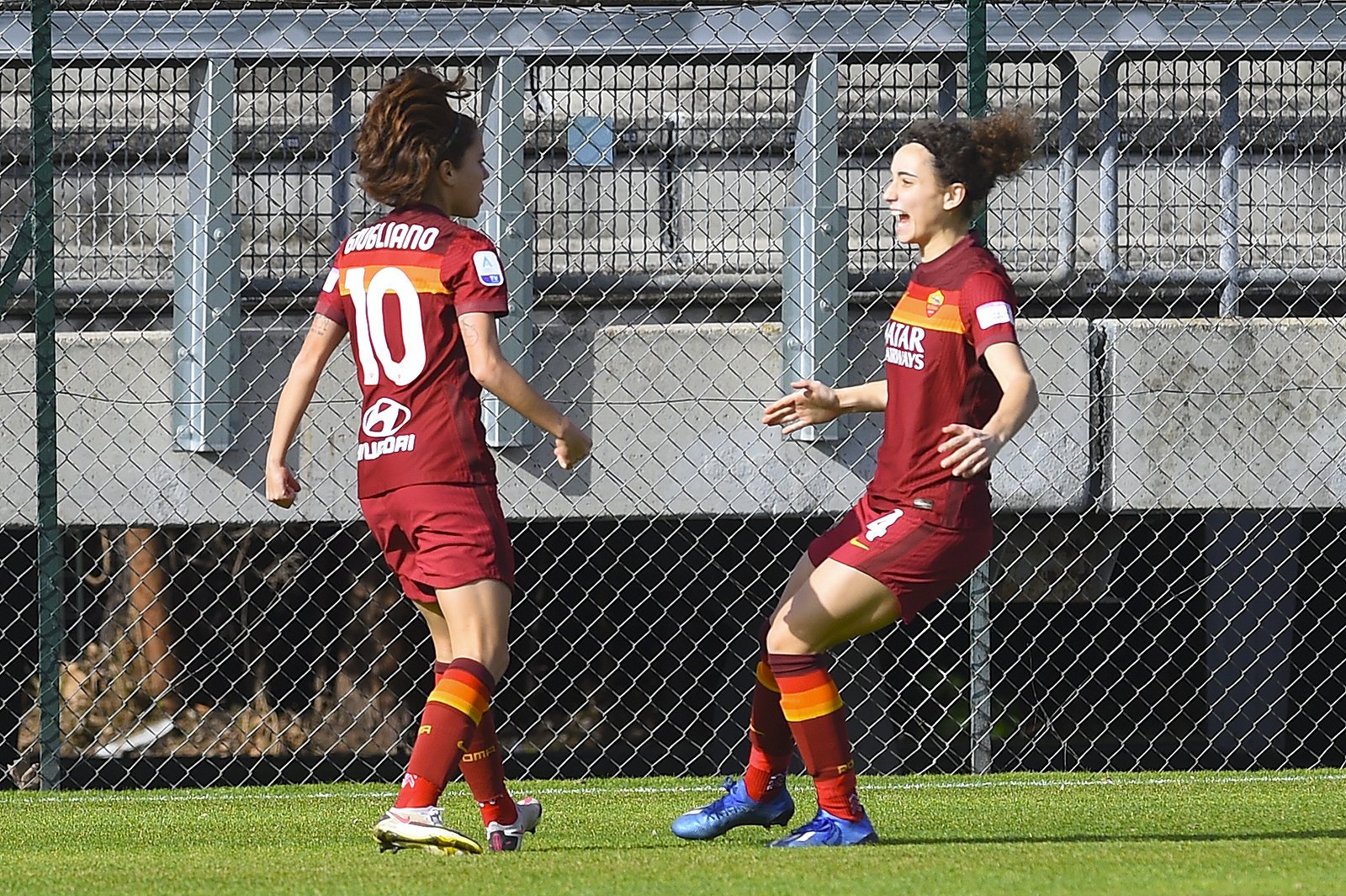