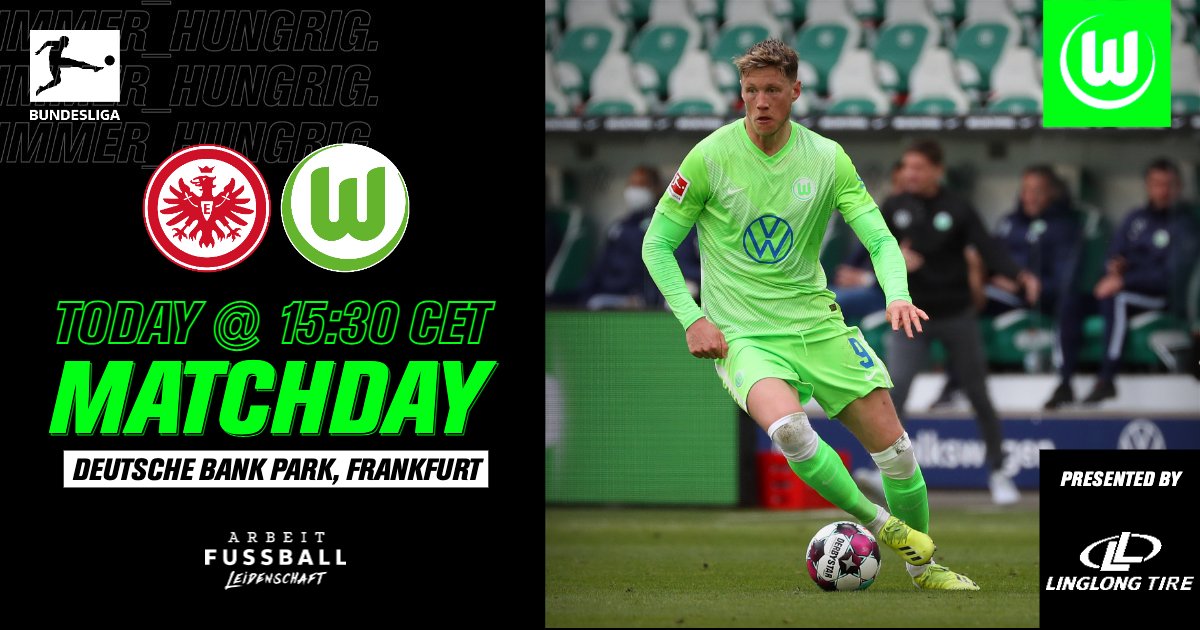 There was a lot of fascination with Thriller that we were subjected to on Saturday morning. It’s quite clear that the Bundesliga title race is over, and Bayern Munich will be claiming the riches once again. Even the Champions League race seems almost done, but that doesn’t lessen the excitement. We saw third place Wolfsburg the best defense in the league against 4th Place Frankfurt both teams on the verge of breaking through and making the champions league for the first time in several years. Two of the best strikers in the league Andre Silva and Weghorst it was going to be something special, and that’s exactly what it was. It turned out to be a seven-goal thriller, one of the best matches in European football this week it was no surprise given the makeup and build-up of both teams. It was going to be a battle from the very beginning, as you could tell with the intensity of both sides trying to find that little bit of superiority. Not that it necessarily matters with both teams Champions League picture almost in fruition. However, they still were thirsty for those three points. 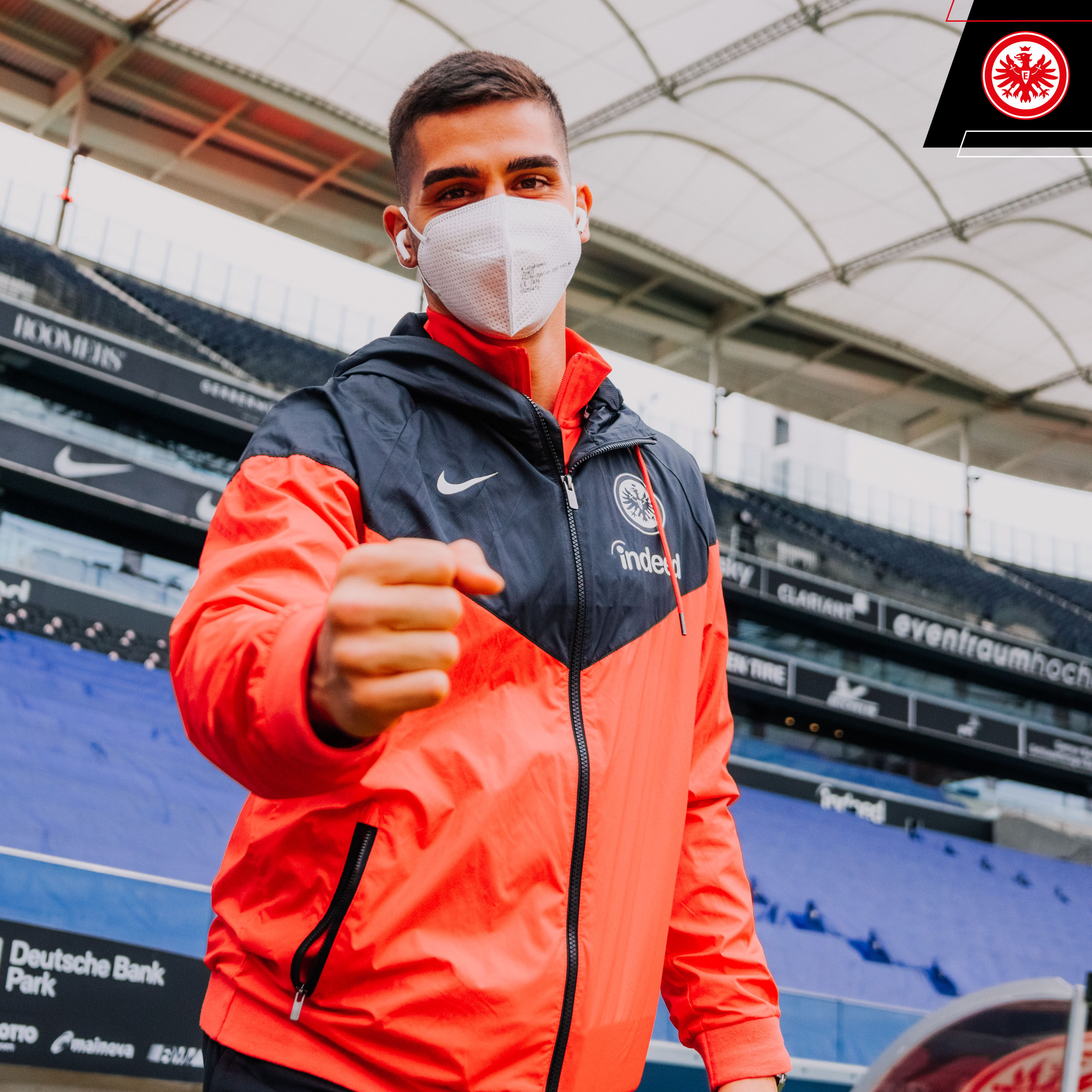 We did not have to wait very long for the game to open up. In the 6 minutes, Wolfsburg found early moments. Babau, just outside the box, rips a stunning strike into the back of the net, giving no chance to Kevin Trapp as Wolfsburg took an early 1-0 lead. This Wolfsburg side has proven to be incredibly explosive; we saw exactly how with a phenomenal goal. Despite taking an early lead, Wolfsburg only held on to it for a minute. In the seventh minute, Frankfurt gets right back on an attack in the Wolfsburg danger area. Eric Dorm sent a pass to the top of the box. Luka Jovic let the ball come through, Dashi Kamada hit the strike from the center of the box into the back of the net as Frankfurt equalizes a minute later. 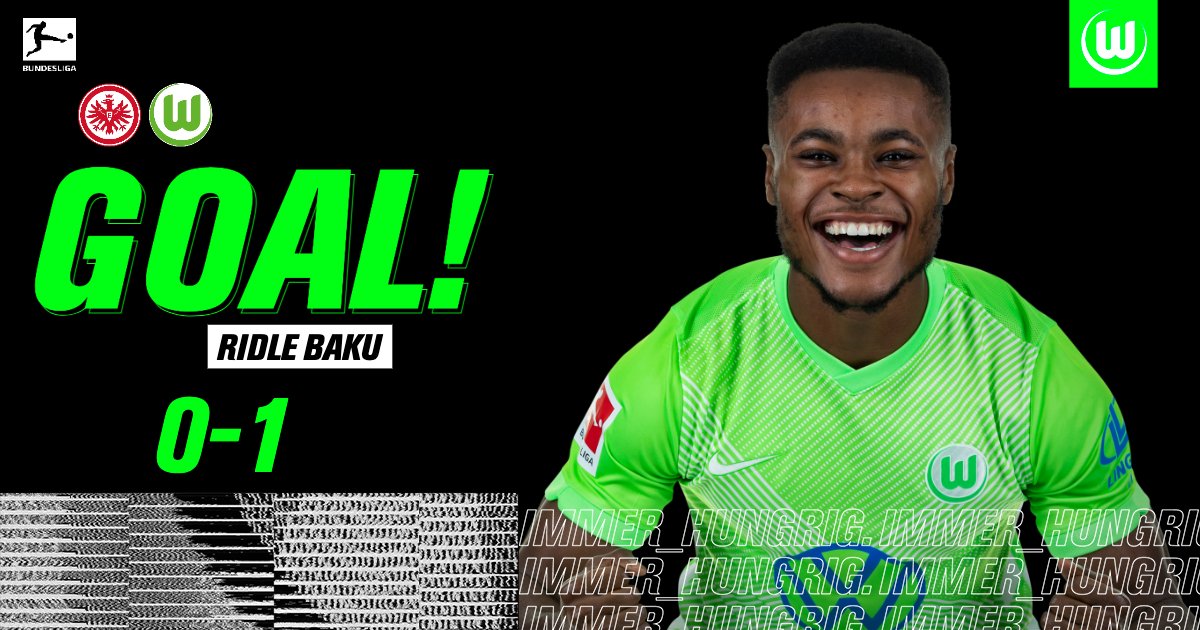 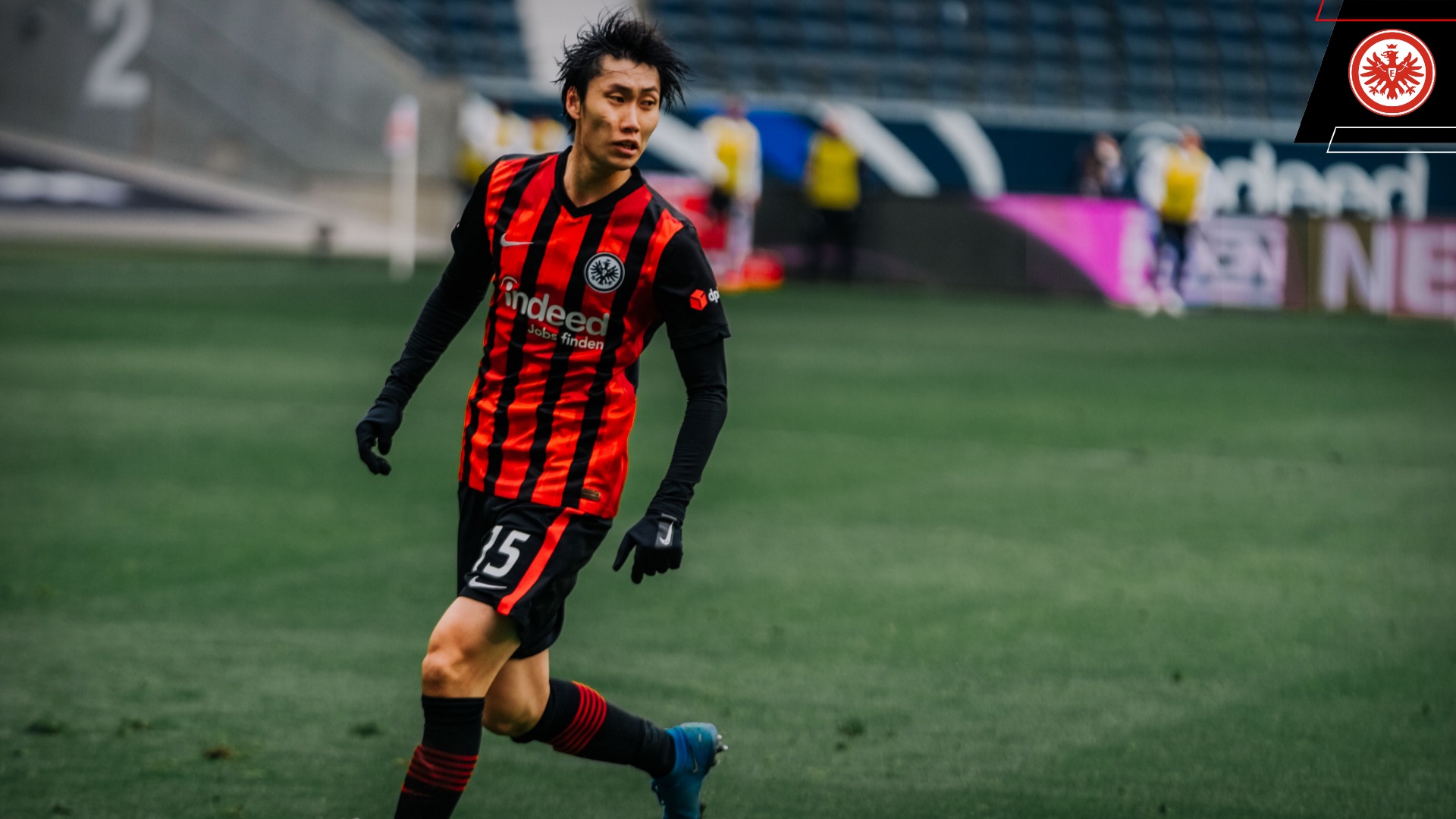 6′,7′ Within Minutes of each other Baku and Kamada score

There continue to be exchanges of chances from both neither teams really having that superiority over the other a couple of minutes before the half-hour mark, and the 26 minutes, we were treated to yet another goal. Andre Silva wisping down the wing was running out of space; he eventually got enough to send through the cross; his path takes a slight deflection to the feet of Luka Jovic as the striker ripped a rocket into the top corner as Frankfurt took a 2-1 lead.

27' @andrevsilva19 does brilliantly to keep the ball in play and cut it back for Jovic, who finishes with aplomb!#SGEWOB #SGE | 2-1 pic.twitter.com/d0PsAeXyDx 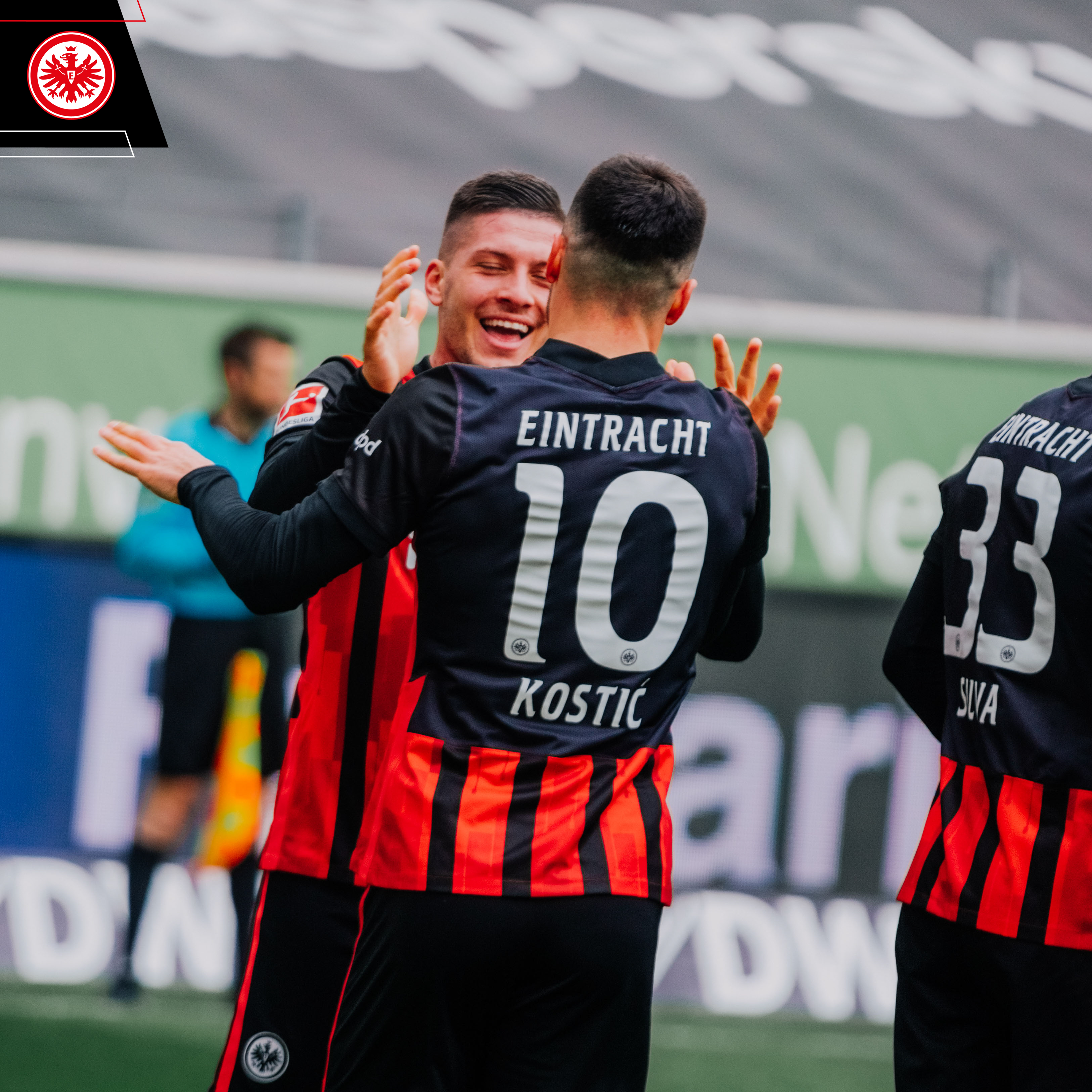 It Continues to be a battle. Wolfsburg was not discouraged as they took advantage of a Frankfurt mistake right on the brink of half-time. A poor back pass led Weghorst to take off the past, finding just enough space to pick out the bottom corner leaving the strikeout of the reach of Kevin Trapp. A goal-fest in the first half with four goals in 45 minutes as we were looking at a 2-2 draw halfway through. 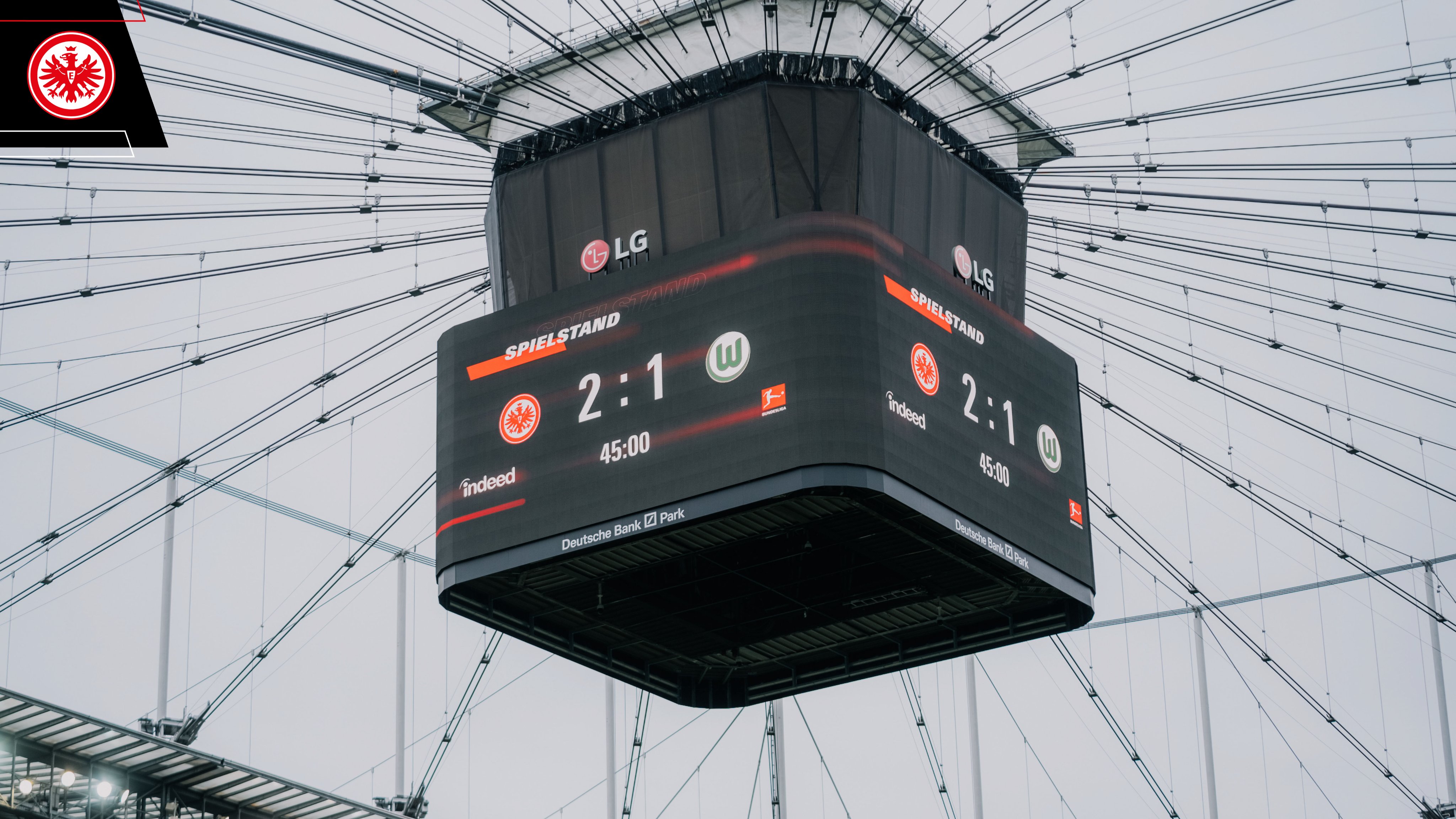 The goals were flying left and right; neither team showed any kind of supremacy at different points of the game; the better team look different it was tough to split between the two teams from each other. In the second half, Frankfurt attempted to change that 8 minutes into the second half in the 53rd minute. A passing sequence from Frankfurt pushing up the field ended up with Dachi Kamada sending an excellent through ball inside the box to Andre Silva, who picked out the bottom corner as Silva connected on the first touch to put Frankfurt in front for the first time as they take a  3-2 lead. It would be his 23rd goal of the season. Andre Silva continues to maintain himself as the Bundesliga’s number two score this season. Frankfurt started to take the momentum 7 minutes later in the 60th minute Andre Silva nearly scored again a beautifully orchestrate attack saw Frankfurt get into the box a pass inside found Andre Silva, tries to connect at the near post, ultimately hitting the post bounced out and back into Eric Dorm he took his time dribbling to the side of the Wolfsburg Defender giving himself enough space searching for the bottom corner he fell down in the process the Wolfsburg goalkeeper got a hand to it but could not push it out as Eric Dorm converted on his strike to give Frankfurt for a 4-2 lead. 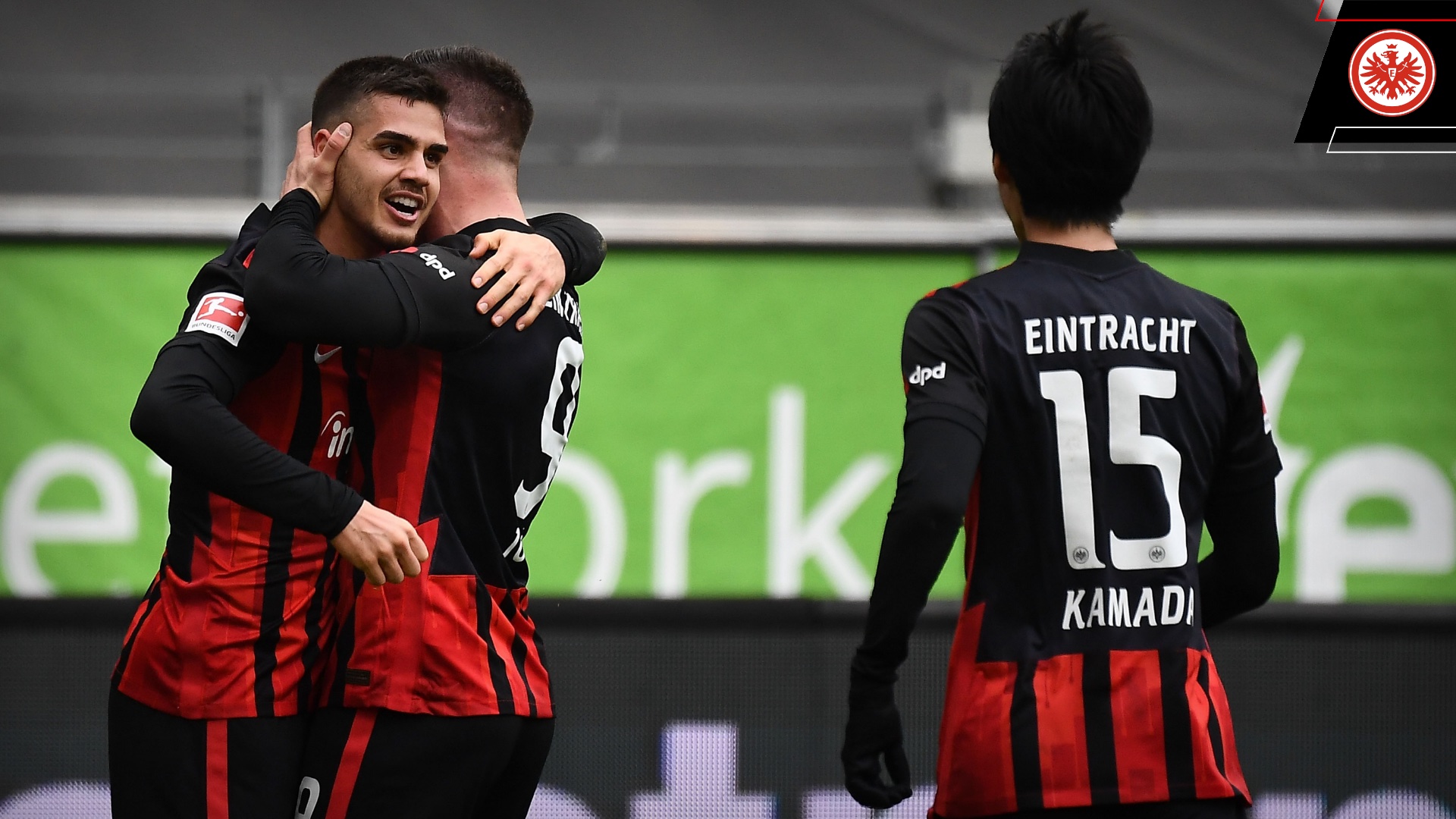 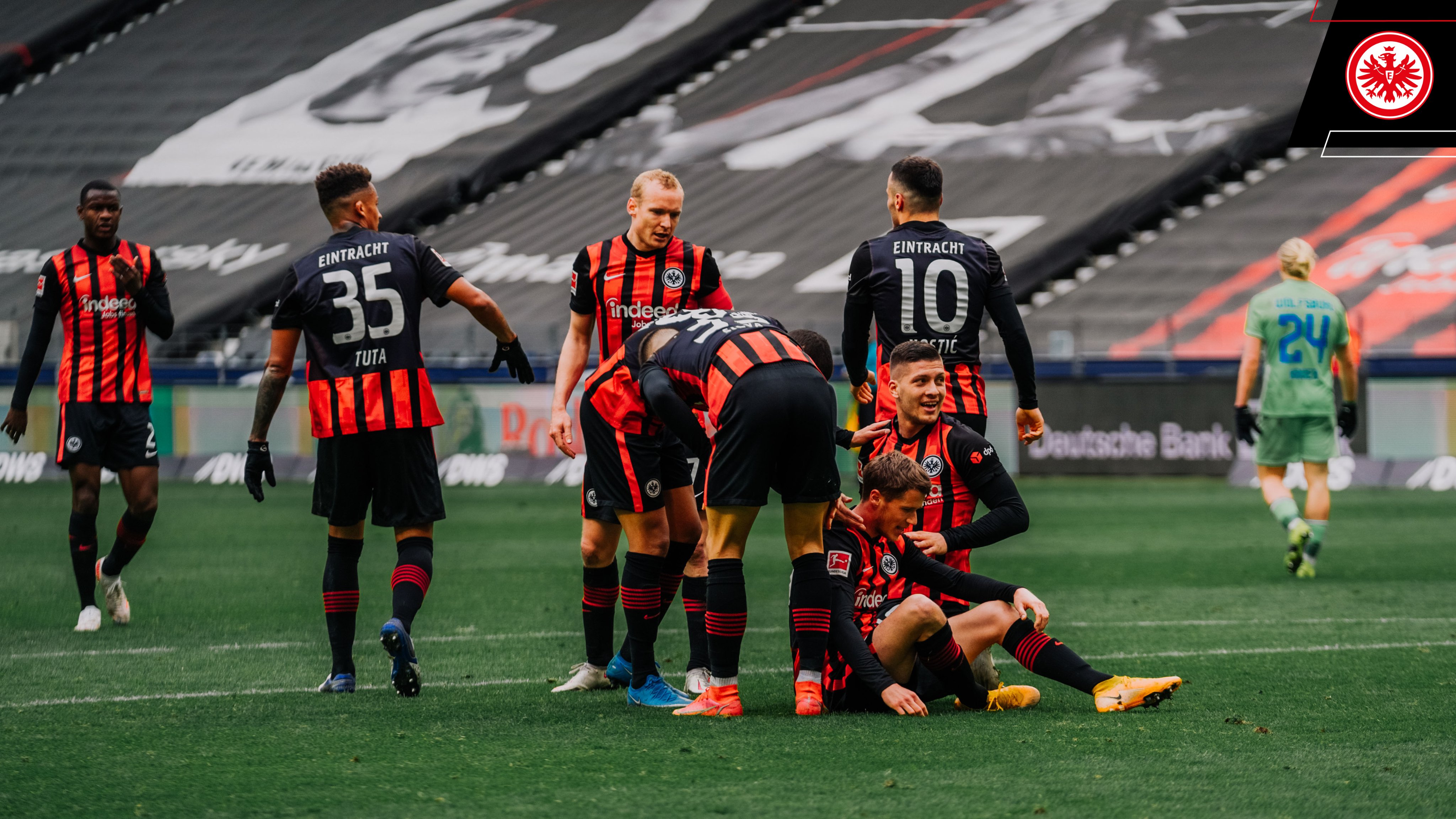 They held this advantage for most of the rest of the game and did seem like the better team; even though Wolfsburg never was truly out of it, it seemed like Frankfurt had secured the points already. But late in the game, in the 83rd minute. Wolfsburg had a late push a deep strike coming to the Midfield cross the ball into the box to find Maximilian Philipp. The goalkeeper came out the striker, followed by connecting over his head to Wolfsburg’s back to minimize the deficit. Despite a late charge from Wolfsburg to try to get the point, the final whistle Blew as we saw an absolute show in a 4-3 Frankfurt victory. Andre Silva and Weghorst both had two-goal contributions, and then we saw some awe-inspiring displays from Babu and Kamada in what was an absolute show. Frankfurt closes the gap between themselves in Wolfsburg for the third position. Still, both these teams will make the Champions League next season, and based on the way they played this game. It’s clear why they deserve it; it was an absolute Thriller. Still, in the end, Frankfurt gets the points as they continue to be the biggest overachievers in European football. 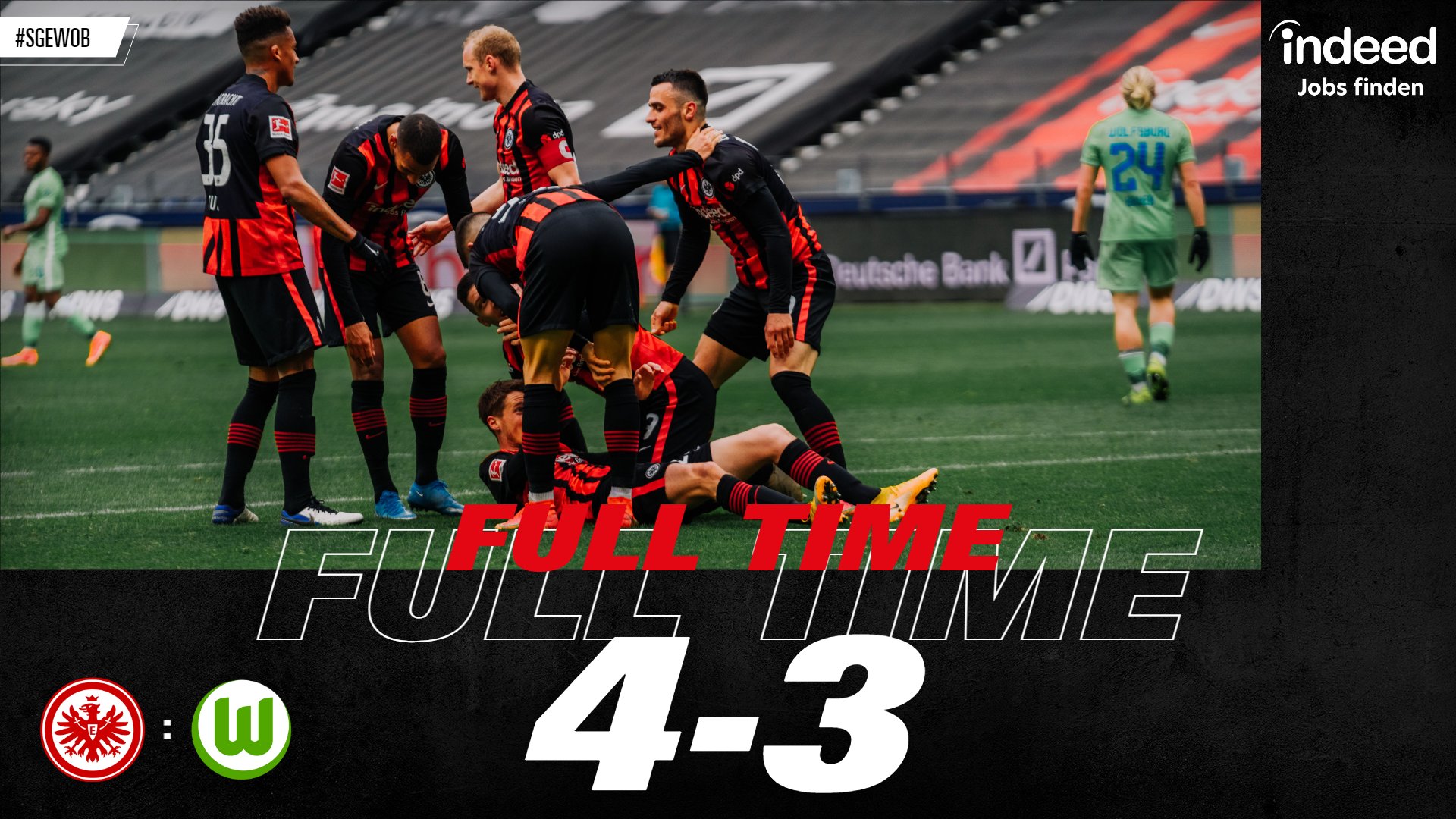 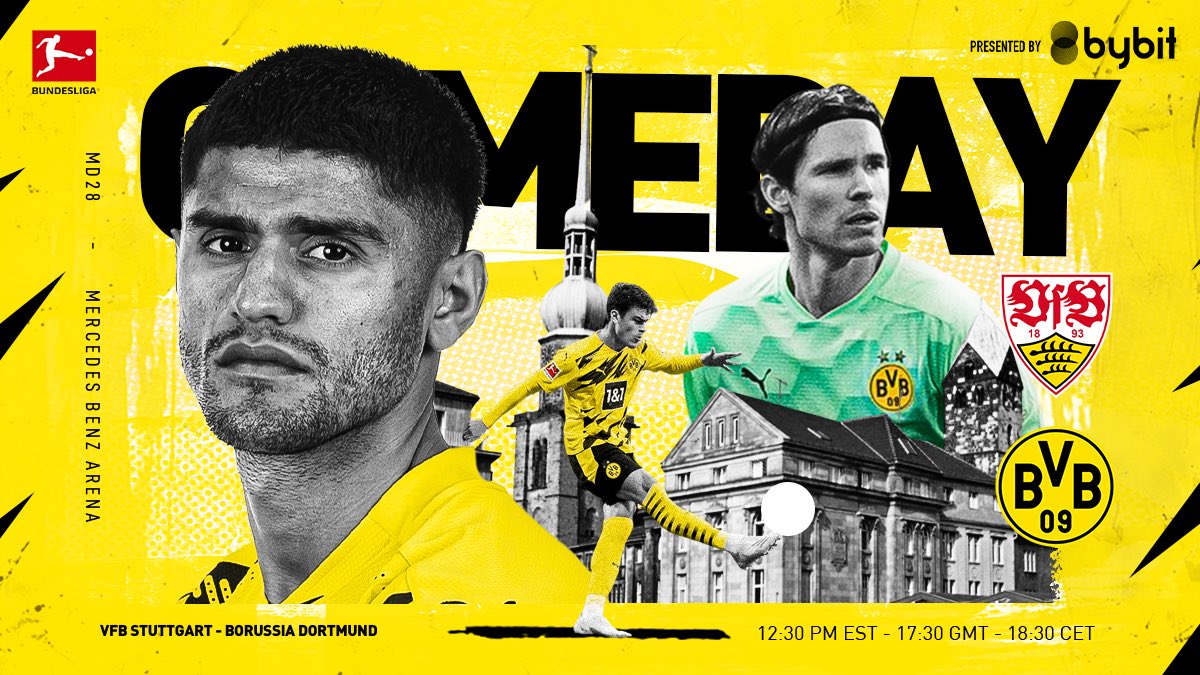 Dortmund has lost their way in the Bundesliga and, at this point, are only playing for pride. It would be almost improbable for Dortmund to qualify for the Champions League now, but they need to get back in the groove as they desire to finish strong. However, for whatever reason, Dortmund has shown up in the Champions League, has looked really strong against Sevilla, and was powerful vs. Man City getting an away goal in Manchester with a chance to qualify for the Semi-Finals but on the contrary, has really struggled in the Bundesliga, we would see them be challenged once again they have lost points to the bottom of the table are hasn’t tasted victory in three weeks.. This time, there was some hope that they could turn their run of form around with an important three points against Stuttgart, a top ten team this season with capable weapons with the likes of Silas Wamangituka, Saša Kalajdžić, and Tanguy Coulibaly a very potent attack as Dortmund knows as they suffered a 5-1 drubbing in the reverse fixture. This was going to provide such a test. Everything in their capabilities to make this as challenging as possible on Dortmund has been vulnerable in the league.. it ended up being a very evenly-matched game; Dortmund, despite having all the talent in the world, fell behind early. In the 16th minute, coming off a corner kick, Saša Kalajdžić got his head on an end of a cross out of the goalkeeper has reached a deep header that just glided into the back of the net. Stuttgart would take a 1-0 lead. Saša Kalajdžić continues to have a breakout season with his 13th Bundesliga goal of the season as the Austrian is becoming quite a name this season as he connects perfectly on the header. Stuttgart in control after 45 minutes, still hanging on to the lead. Dortmund needed a response in the second half that was clear somthing speical was going to be required.

Saša Kalajdžić gives Stuttgart 1-0 lead as the Austrian has his side in front at the break.

They were chances for both sides any opening 45 minutes, but Stuttgart did seem like the better team even though Dortmund had a fair amount of chances. At the break, Stuttgart held the cards. Just a minute into the second half, they found their moment. In the 46th minute, Jude Bellingham found space keeping himself onside before finding the back of the net to get an equalizer; after getting his goal wrongly wiped off in the City game, he got his goal scoring his first Bundesliga goal, a big moment for the youngster. . 2 minutes later in the 51st minute, Dortmund Captain Marco Reus found just enough space to convert a strike as Dortmund all of a sudden tree took a 2-1 lead as he gives a captain’s contribution to Dortmund. 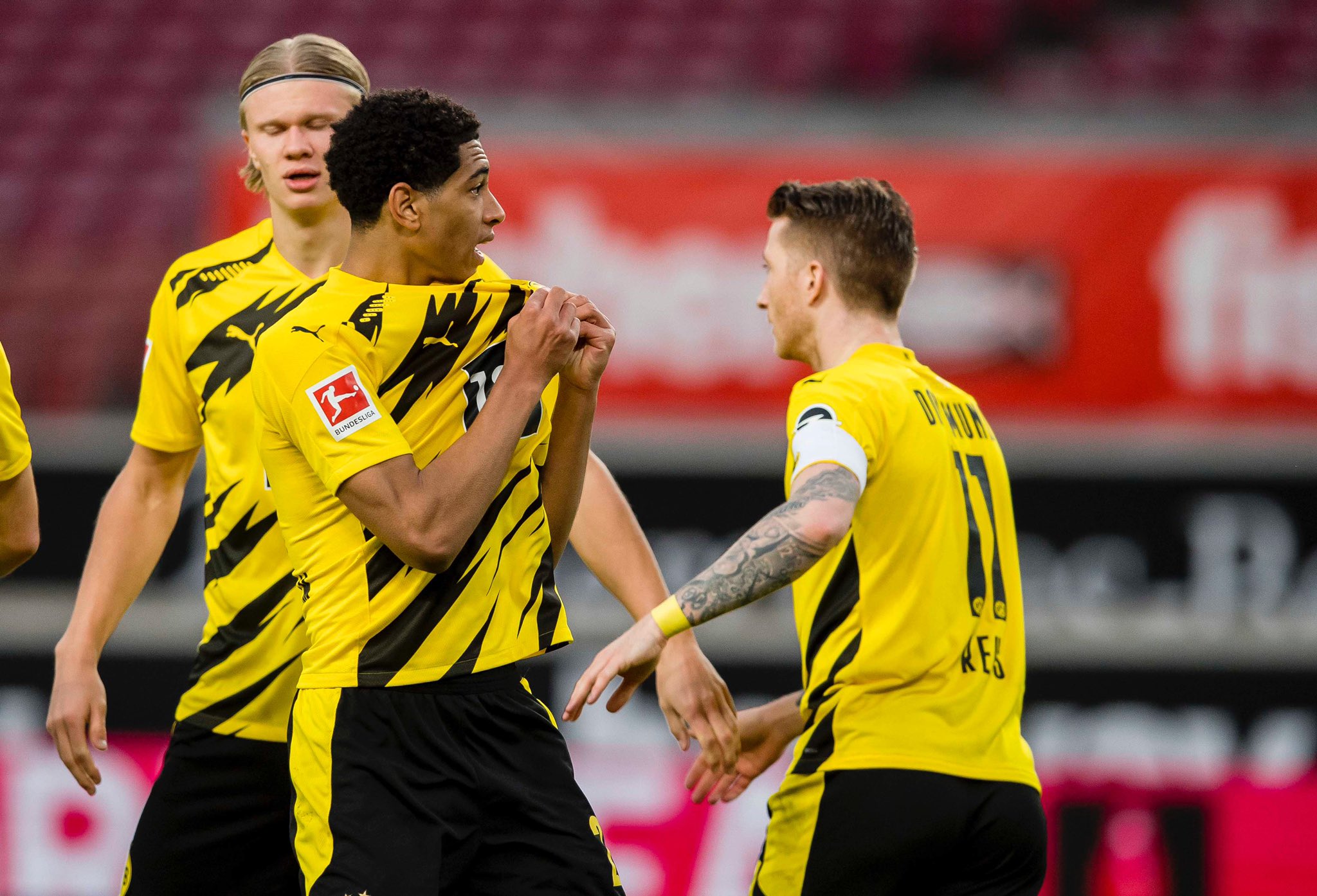 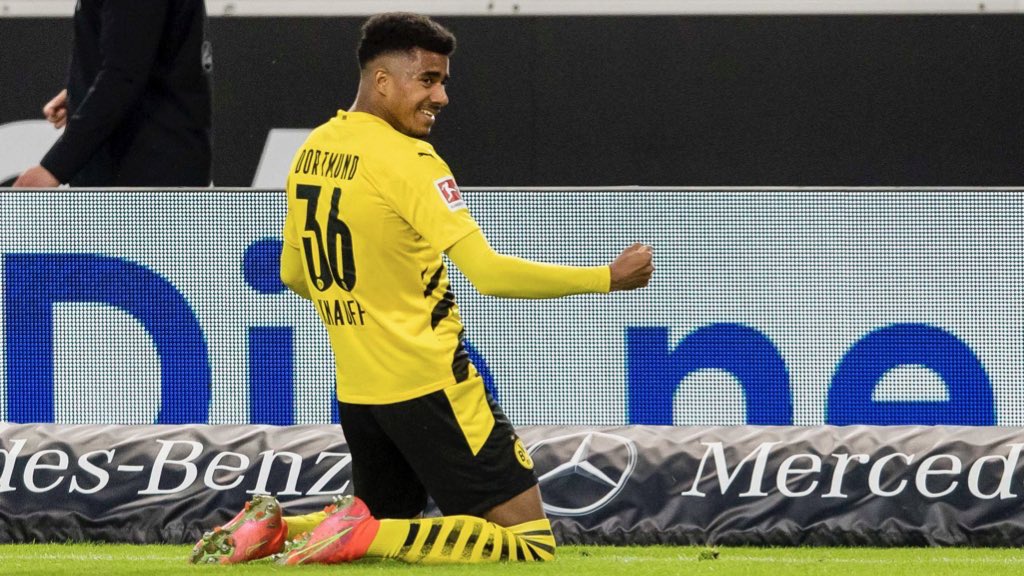 It did seem that Dortmund was in cruise control after retaking the lead, having the better the chances and being in someone control it felt like that was going to be the end of it, but Stuttgart wasn’t backing down from anything. However, in the 77th minute, coming off a break, Daniel Didavi converted on the one on one beautifully orchestrated go as Stuttgart found their equalizer. 2 minutes later, Dortmund retook the lead Dortmund youngster Ansgar Knauff in the 79th minute from outside the box, providing just enough space in a well-orchestrated strike finding the bottom corner a wonder goal for the youngster as he scored his first goal in the Bundesliga as the 19-year old gives Dortmund that moment. Stuttgart tries to find their way back But ultimately was unsuccessful as Dortmund finally ended their skid in the league; unfortunately, it still is going to be close to impossible for them to make the champions league, but at the very least, they got their form back just at the right time. Dortmund may be blowing it up next season, but still, for the time being, they came through as a team as Dortmund win a thriller away from home. 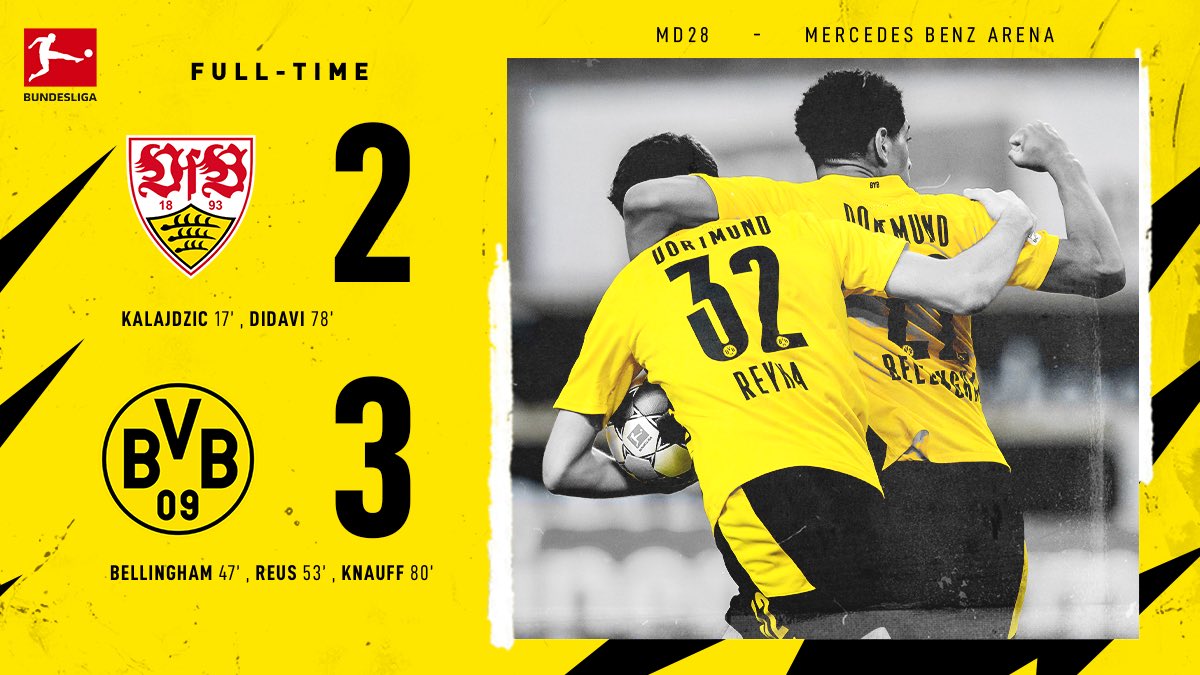 Jude Bellingham after the match talking about his first Bundesliga Goal