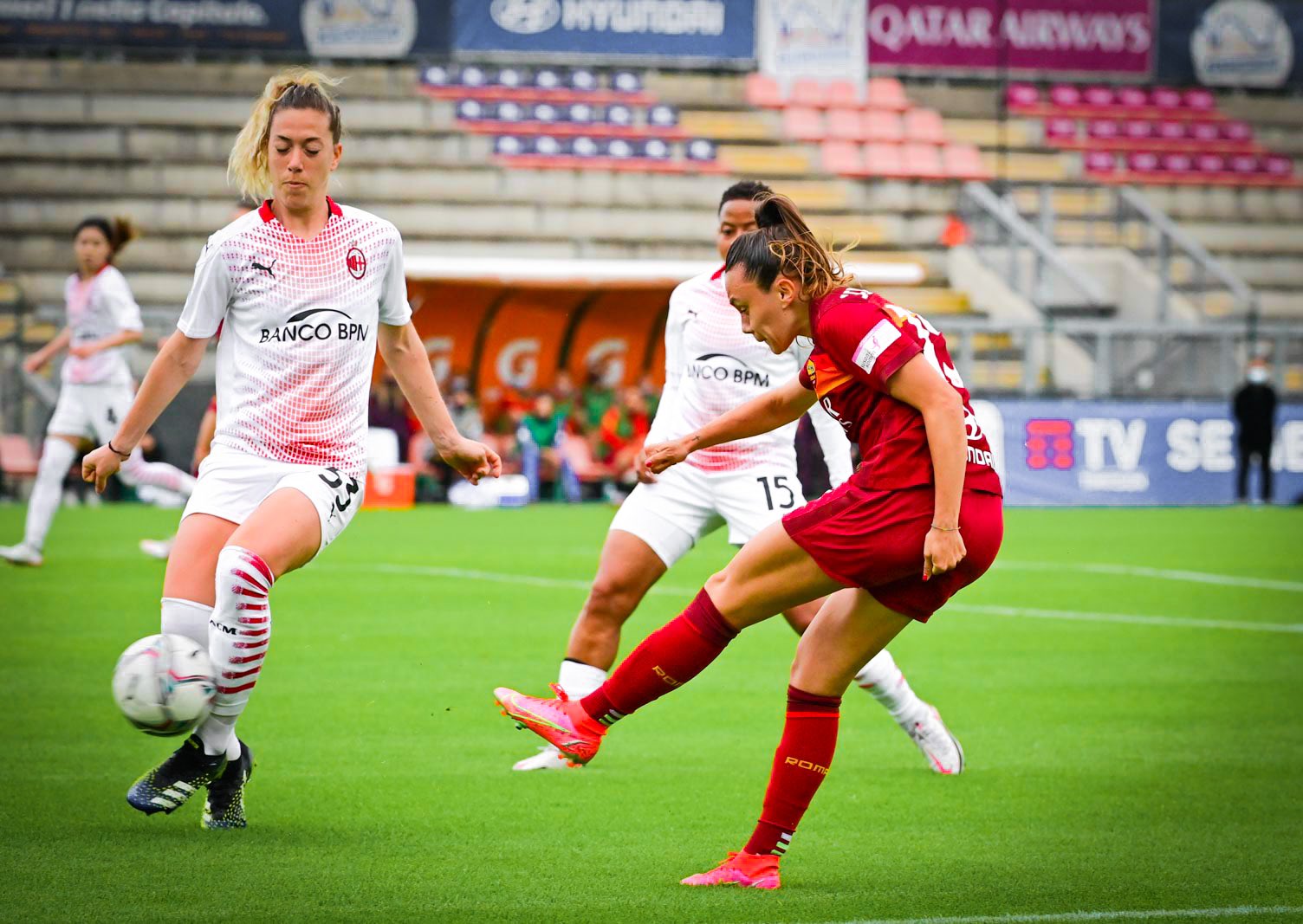 The Roma women only continue their journey in the late stretches of the season to try to, at the very minimum secure a top-four spot in which they are currently sitting. However, in women’s football-only, the top three teams make the Champions League. Nonetheless, it would still be an achievement for this Roma team that struggled so significantly at the beginning of the season. Last weekend the Roma women clinched their place in the Coppa Italia final. Despite losing to Juventus, they Advanced because of their two away goals, they achieved their 3-2 loss. After the season is over, Roma will take on AC Milan in the final with a Chance of winning silverware for the first time in club history. Ironically Roma would end up getting a little taste of what they can expect in the Coppa Italia final. They would host AC Milan at home in a preview of the cup final that will take place in a couple of weeks. On top of that, with four games left, there’s still a possibility that they can finish in the top three. As they are only six points out, it is still unlikely, but the Never Say Never Champions League still may be achieved. It would be an exhilarating and highly competitive battle between two top teams in women’s Italian football. 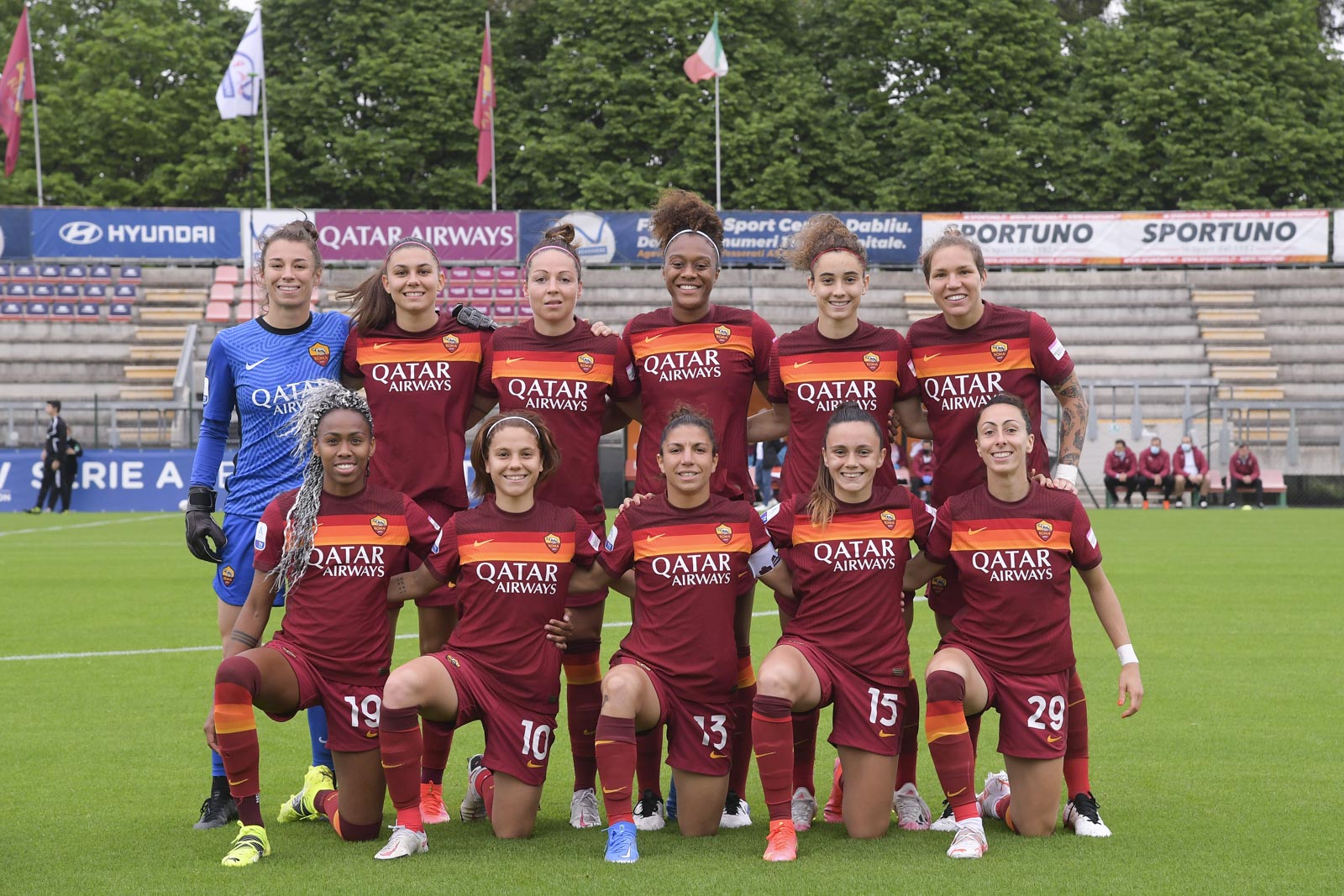 Roma and AC Milan came into this game with identical form over the last five games, both teams having their ambition to climb the table even further. Juventus will win the title as they have not lost a game all season in League Play. Still, Champions League football for both these teams is something achievable even though AC Milan practically have it in their hands and Roma on the outside looking in it was something that was going to be very important not only to end the season strong for both sides but also trying to get a feel of what they will be dealing with in a few weeks. Roma played with a significant amount of confidence, and it showed in the early part of the game. It was relatively evenly matched, but Roma did seem like the better team, more in control, at least that’s what the perception felt like in the first half. Manuela Giuliano pushing the ball just outside the box, tried an audacious strike from Deep; she had the power and some accuracy on ultimately the wind hold the ball a little wide despite missing it sent a message to AC Milan that they were going to get after it. 4 minutes later Roma had another opportunity to put themselves in front potentially. On an attack, both Bartoli and Linari forced the AC Milan goalkeeper into a double save; she did an outstanding job adjusting as both chances came from different sides. A minute later, AC Milan got on the break, and in good space, they struck with power at Camelia Ceasar. It became a little nip and tuck between the two teams almost to the point is there were stretches of moments that AC Milan was better, and then margins were Roma was in control it was a game that was really hard to judge, especially in the first staff. 3 minutes later, AC Milan came through again in danger space, but the shot from close range had a little too much power on it as a ball Coast it over the goal. Milan kept pushing and pushing, looking incredibly dangerous, especially when they got forward. At the half-hour mark, it looks like AC Milan was going to push themselves in front. But an incredible save from Camelia Ceasar with the fingertips pushing the ball into the crossbar as it went out and an absurd save from the Romanian who keeps Roma in the game. Then in the closing moments of the first half, Valentina Giacinti, the League’s top scorer this season, tested the Romanian keeper yet again. Still, Camelia Ceasarcame up with another big save as both Roma AC Milan go into the second half with a goalless affair. 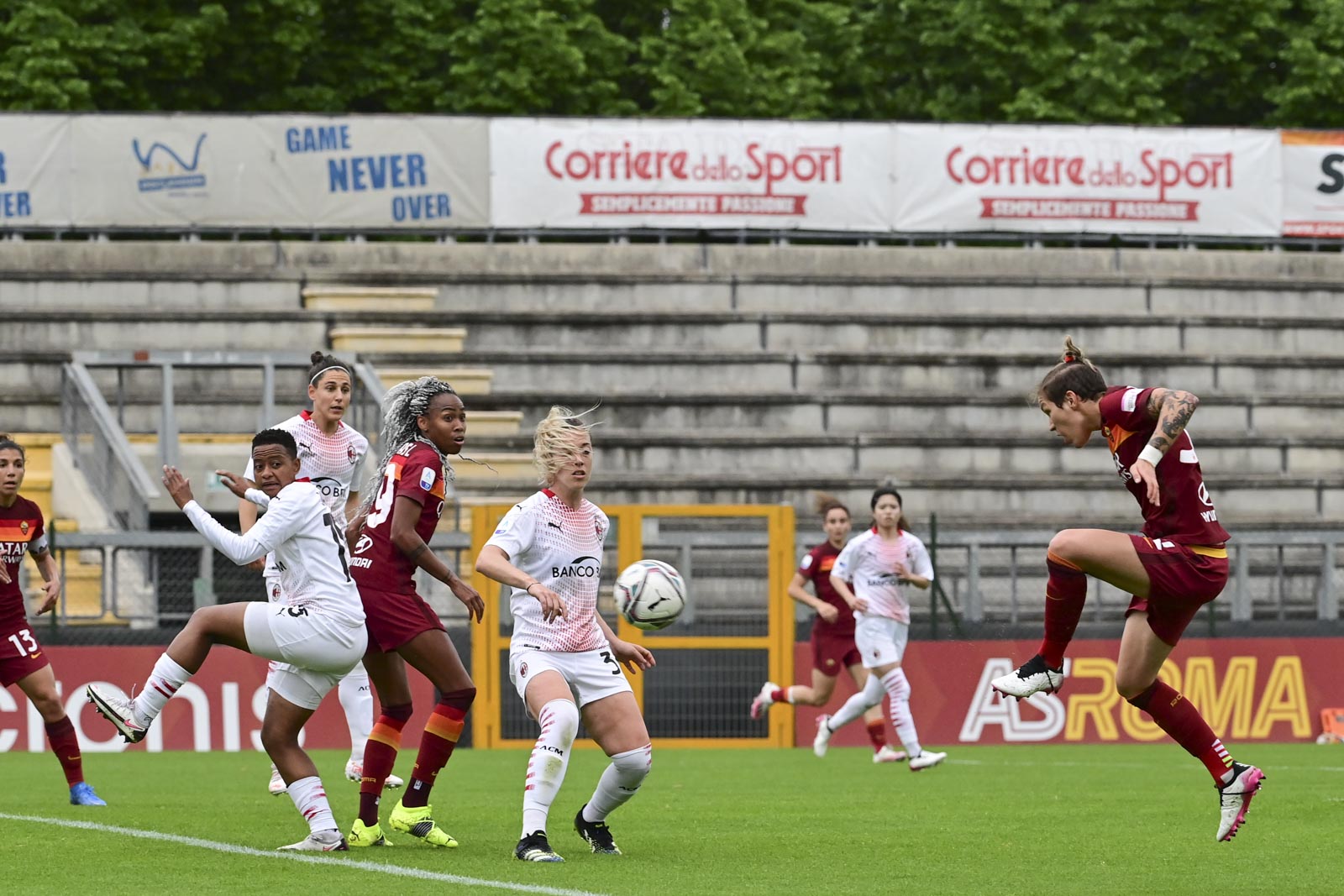 Roma looked very dangerous in the first 20 minutes; it looked like they had some opportunities to score, but it tipped into Milan’s favor about Midway through the first half. Camelia Ceasar was called into action repeatedly to make some saves. The Romanian has captivating for Roma in this game, especially with the late chances to end the first half. This was going to be a tightly-contested affair even though Roma and Milan both had their moments; neither team has the stamp of superiority. 15 minutes into the 2nd half, Pamola Lazaro came within inches of giving Roma a lead. The Spanish International drove the ball into the box as the goalkeeper was coming out to deal with the situation; she tried to Chip The Keeper having the distance and accuracy, but a little too much power from the Spaniard saw the ball hit on the top of the net instead of giving them the lead. 6 minutes later, AC Milan came very close with a strike from the wing that did not have the distance to find the bottom corner but fell to the other one; fortunately for Roma, Vanessa Bernauer slid in, defecting the ball before the attacker could have a fire on goal. Camelia Caesar was out of position as the Swiss Defender comes up big, saving a potential goal-scoring opportunity. With 20 minutes to go, Milan threatened the keeper once again, coming off of a free kick into the box, but the header misfired, going over the goal. In the closing moments, with just two minutes to go, Annamaria Serturini hooking a beautiful shot in between the post but the goalkeeper but was alerted by the situation and made a save that would signify the end of the game as it ended in a goalless draw. A Stern test for both teams that get a little taste of what they will see in the Coppa Italia final. 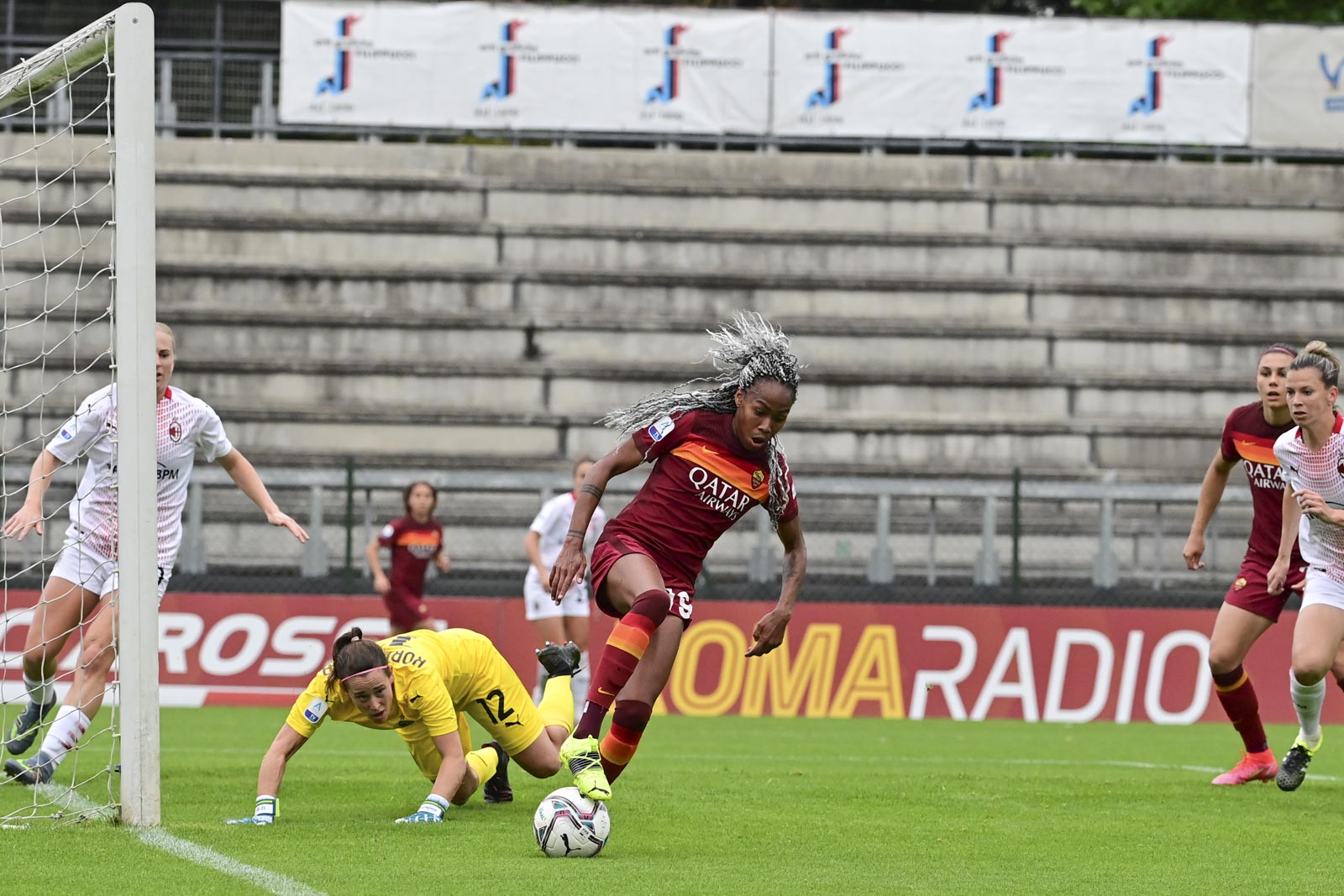 This is as tightly-contested of a contest as we have seen this season. A true battle between two teams, neither of which ever had superiority. AC Milan was a bit wasteful in front of the goal, and Caesar did come up with some big-time saves, especially at the end of the first half. AC Milan repeatedly tried to carve Roma up on the counter-attack, but it never came through incredible defending, and tremendous goalkeeping performance capped the game even on multiple times in which it could have changed slightly. Roma also found their ways to attack AC Milan they found those gaps to try to be effective; in the end, there was no-goes in between them despite both Lazaro and Anna Serturini coming Incredibly Close to getting second-half goals. We learned that this is an adamant team, and Rome will have their work cut out in the Coppa Italia final. Neither showed to have an edge as competitive and as tight as it gets. The Coppa Italia may be a month away for both teams that got a little information; having played 90 minutes against each other, they will be facing each other shortly after the season. The big takeaway from Roma is the impeccable defense that cap AC Milan at arm’s length pretty much all game; the woman of the match goes to Camelia Ceasar; she was able to make some vital saves and some big moments during the game. Roma still has an outside shot of making the top three because they keep playing at this level and get help elsewhere. Roma has been one of the best teams in a league during the second half of the season; whatever happened, it has clicked, and this looks like a much more dangerous team. With the right direction, next season and they could compete for the title and at the very least make the Champions League. The Roman women got hot too late, but they have shown their capabilities late in the season. Roma will have an opportunity to win a trophy at the end of the season against this very AC Milan as I’ve mentioned this game only heightens what we could see when that fateful day arrives both teams went at each other and test each other in different ways, there was nothing to split between we’ll see if that is the case on the Coppa Italia final only time will tell, but this was a suitable type of what we might see on that day.

"It is an honour and a privilege to be able to continue to represent this club." 💛❤️#ASRomaWomen #ASRoma pic.twitter.com/7oMsKO8f0Y