Wolfsburg went into the final game, having qualified for next year’s Champions League. There wasn’t much to play for other than attempting to finish the season on a high. As long as Dortmund were able to beat Leverkusen Wolfsburg, they would finish this season in fourth place above and beyond what anyone thought this team was capable of at the start of the season. They would post FSV Mainz against the odds in their own right fighting relegation this season when it looked like it was inevitable at the start of the year. It turned out to be a five-goal thriller in Wolfsburg. It was a back-and-forth battle between two teams, a very exhilarating match in the final game in the Bundesliga this season. FSV Mainz was very impressive, went right at Wolfsburg, and made them pay on a couple of different opportunities. Wolfsburg’s starting goalkeeper was rested for the season’s final game as he is preparing for the European Championships this summer. Right before halftime, Robin Quaison took advantage, giving FSV Mainz the 1-0 lead. In the second half, Wolfsburg hit back almost immediately, Maximillion Philipp scoring another outrageous goal and potentially its final game in the Wolfsburg colors. Midway through the second half FSV Mainz got themselves in front again, taking a 2-1 lead. Only Wolfsburg came back with a scorcher from Joae Victor as Wolfsburg got their equalizer yet again. However, in this match, FSV Mainz was always a step ahead as they got a winning goal late in the second half as Wolfsburg fall in his final match of the Season with FSV Mainz leaving the campaign with their heads held high. The game didn’t have any ulterior motives; it was purely about pride and putting together a good performance on the season’s final game. Wolfsburg was upset in a 3-2 Thriller to end the season. Wolfsburg finished the season in fourth place with 61 points as they are hoping to use that Champions League money to reload and try to make the Champions League yet again, but they do fall to FSV Mainz as they extend their stay in the Bundesliga.

Wolfsburg operated out of their usual 4-2-3-1 formation. In goal would be Pervan who makes a rare start as Casteels set the final match of the season out. The back four would remain the same. At left-back would be Paulo Otavio, beside him would be the center-back partnership of John Brooks and Maxine Lacroix, then at right-back would be mbabu. The defensive Midfield would be made up of Maximilian Arnold and Xavier schlager. In the central Midfield operating as the false 9 would be Maximilian Philipp. It was left would be Josip brekalo, and then on the right would be riddle Baku. Upfront as Wolfsburg Central Striker, the leading goal scorer and the fourth-highest scoring player in Wolfsburg history wout Weghorst. 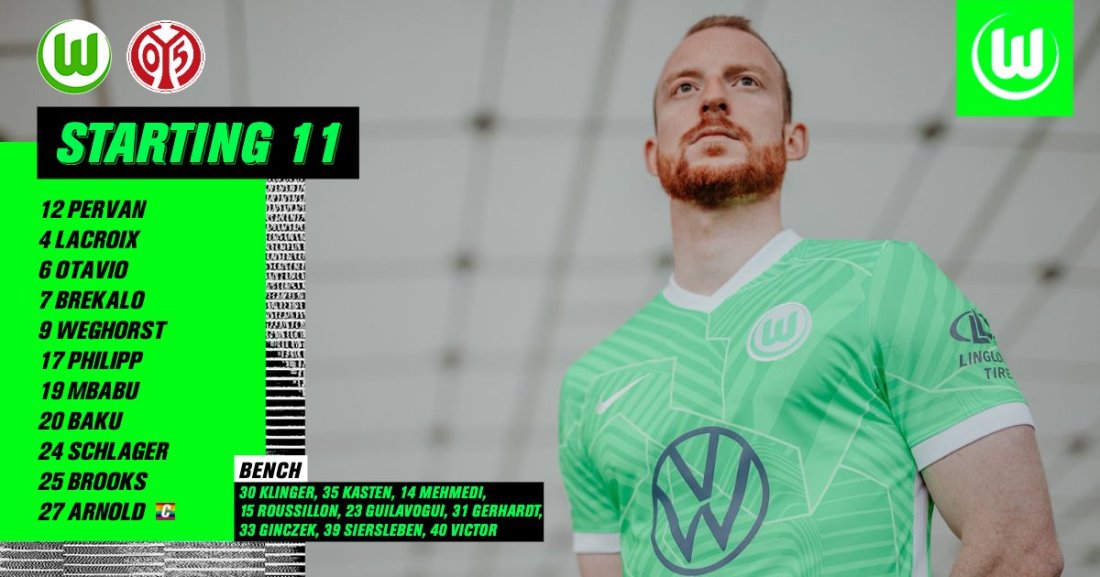 After preparations and predictions, the match got underway at the Volkswagen Arena for the final match of the Bundesliga season as Wolfsburg played host to FSV Mainz. The visitors had an awe-inspiring approach during the starting part of the match. They attempted an early shot just minutes into the match but were dealt with as the keeper made the save from close range. However, Wolfsburg had a brilliant reply just a couple of minutes later, Kevin Mbabu from the corner hit a beautiful cross inside to wout Weghorst, who got on the end with a bullet of a header surely should have been at the opening goal, but the goalkeeper miraculously made the save. A really outstanding piece of goalkeeping that denied a particular goal. After fsv Mainz came close with a header from the middle of the box, Kevin mbabu try to reply with a header of his own coming from a Maximilian Philip cross but was saved by the goalkeeper. It was a little back and forth; there were several spurts of control from Wolfsburg, but it was more or less of back-and-forth. Wolfsburg had their moment, and then fsv Mainz went on a bit of run of their own with several chances late in the first half a; another header misfire before a strike from outside the box was denied from Deep; however, at the end of the first half, fsv Mainz found just enough space to take the lead as a Robin Quaison picked out the bottom corner as fsv Mainz took a 1-0 lead as it signified the end of the first half.

Wolfsburg had a good first half some excellent chances to take the lead fsv Mainz prevented Wolfsburg from potentially taking some momentum into the second half. It was the visitors that struck first just at the end of the first half. However, Wolfsburg was not going to be discouraged; they would fight their way back into the game, and as it turned out, they did not have to wait all that long. In the 47th minute, Maximilian Philipp scored an outrageous goal connecting with his foot out of the air coming from a Paulo Otavio cross as he stuck the ball in the back of the neck to find The Equalizer; it would be the sixth goal of the season for the on-loan attacking midfielder from Dinamo Moscow. However, that did not last very long after a close mess from outside the box from Xavier schlager, it would be Robin Quaison yet again in the 54th minute picking up the scraps from a save from outside the box to tap it into the back of the net as fsv Mainz retook the 2-1 lead. Wolfsburg made a couple of changes following a couple of misses from Xavier schlager, and riddle Baku Wolfsburg got themselves an equalizer through Joao Victor heading a rocket from outside the box after being set up by wout Weghorst as he hit a missile into the top corner, getting The Equalizer yet again. Both teams had their moment, and we’re looking for that winning goal, But ultimately it would fall to fsv Mainz, who seems to be a step ahead throughout the game in the 77th minute Stephen Bell converted on a header patrolling what looks like it would be the winning goal. With eight minutes to go, Xavier schlager hit the post with a strike from outside the box fsv Mainz kind of took control over the last couple minutes with a multitude of chances to try to increase it even further the final whistle blew fsv Mainz pull off the upset in the final match of the season. Wolfsburg Make Champions League and fsv Mainz survived another season in what was an entertaining outing on the last game of the season.

There really isn’t much to take away from this game since the result doesn’t really define anything. Wolfsburg had qualified for the Champions League with the point they got at RB Leipzig last weekend. Meanwhile, FSV Mainz, despite spending most of the season near the drop zone they has climbed their way out of it and close to mid-table as they were looking at the prospect of potentially pulling off a 12th Place finish. For a game that did not mean much, it was exciting and enthralling as we saw a five-goal thriller between two teams that seem to be up for despite the surrounding circumstances of nothingness. Both teams had their moments, but fsv Mainz appeared to have the momentum push. They had more to fight for in a nutshell; whether they beat Wolfsburg are not made any difference, but from a pride standpoint from a team that was at the lower half of the table most of the season getting a win against Wolfsburg, a Champions League team would be good for them just from the standpoint of on a confidence boost. Wolfsburg in all likelihood will be fighting for the Champions League again next season but at the very minimum, will be in Europe in some capacity as long as they keep the team together. Meanwhile, FSV Mainz will probably be in a battle for safety again, meaning a win like this against a Champions League side on the last game of the season can give them that confidence boost that they can take him to next season. Both teams performed very well, but FSV Mainz just a stretch better; every time Wolfsburg got themselves back in it, they always had a reply. In the end, they get the 3-2 victory even though the result itself doesn’t prove much, but it was a great way to end their season. The man of the match was Maximilian Philipp, yet again showing his importance to the team. He will be returning to Moscow as his loan has concluded, but I wouldn’t be surprised if Wolfsburg tries to get him on a permanent deal, especially how he’s played as of late. Wolfsburg season ends with a loss, but they make the champions league for the first time in five years as they can leave the Volkswagen Arena with a smile on their face following a really outstanding season for Wolfsburg.

MAN OF THE MATCH: Maximilian Arnold