It has been the definition of a breakout season for Andre Silva. A player that once was cast away from AC Milan has found a home in the Bundesliga with Frankfurt and nearly made the Champions League. He was one of the best strikers in the league and European football as a whole. Even though Frankfurt ultimately choked away the Champions League, it wasn’t his fault that Andre Silva, even in the late stages of the season, scored or supplied a goal in each of their last four games. He has become an absolute animal for this Frankfurt side that was such a fascinating team to watch. Andre Silva collectively has given defenses a problem practically the entire season. This was the best season we’ve seen from a Frankfurt Striker since 1977; that’s how consistent he actually was; he was a goalscoring machine for the Eagles and almost made the champions league for his side; they have other good players, but he led them into the battle week in and week out and has shown that he’s become one of the best strikers in the world. He was the second-highest goalscorer in the Bundesliga this season with 28 goals; only Robert Lewandowski, the record-breaker, had more. Andre Silva ranked either first or second in essentially every category. He has reshaped his reputation to become one of the best strikers in the world and certainly will be boarding the plane when the European championship. You could call it a breakout season, but it’s not only that he was one of the best players throughout the entire campaign, even better than erling Haaland, which is big considering what we know the Norwegian can do with Dortmund. Andre Silva was number one in headed goals, number two and goals, number 2 in big Chances with 62, and number two in shots on target, not to mention he supplied 27 key passes throughout the season. This is the highest goal scorer in the campaign that they’ve had in over 30 years. Hanging on to Andre Silva may be a challenge because everyone in Europe seems to be at least thinking about the player’s interest, and you’d be foolish not to be. His relationship and communication with Kamada and Filip Kostic have been one to watch this season; the three of them together have been a nightmare to deal with. Andre Silva has a knack for goalscoring from all ranges and constantly puts himself in a position to score his goals. Overall complete performance from a striker the best we’ve seen from Frankfurt in a long time. He has been the real difference in this team in their unlikely success that they’ve had this season this year; there was no doubt Andre Silva is one of the first players on the team of the season, considering the number of impressive Strikers we have seen this campaign getting on the team of the season is something very difficult but after Robert Lewandowski when you think about the most dominant Strikers in the League Andre Silva is always your second thought as he earns a team of the season honor deservingly. 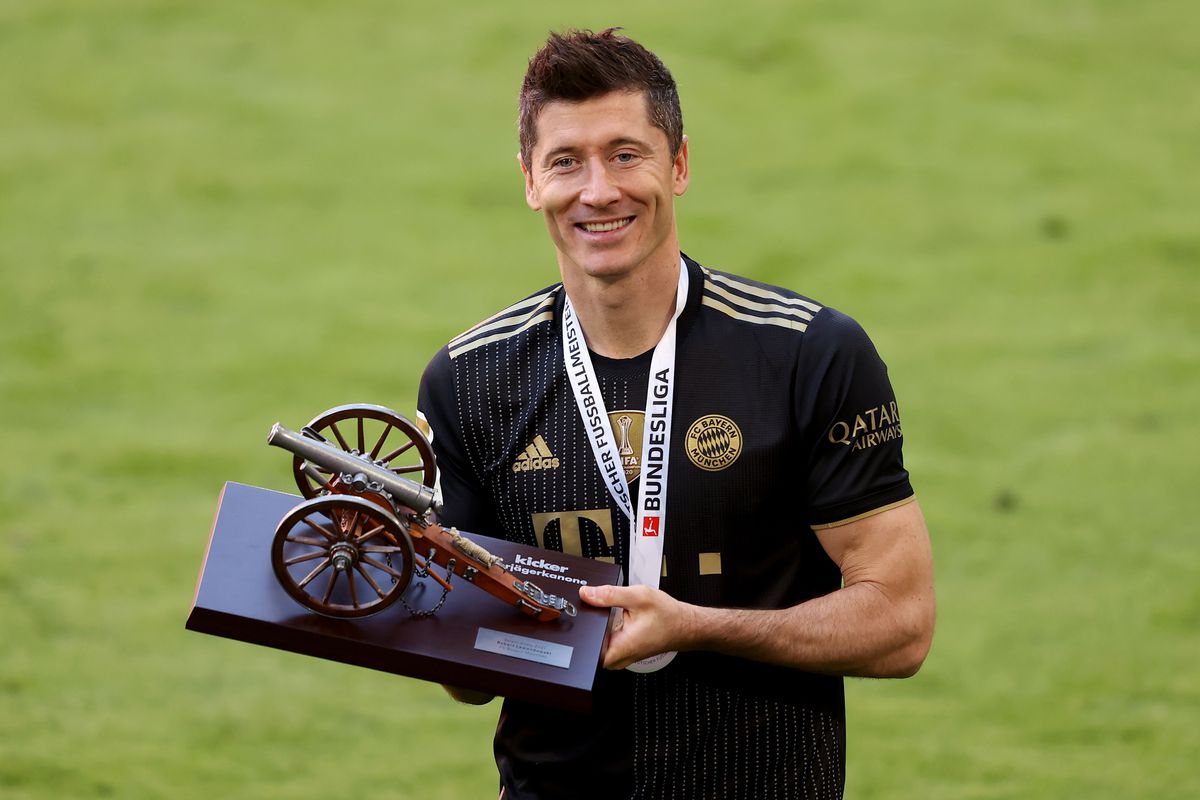 Up top leading the Bundesliga attack as the central Striker is that the record-breaker Robert Lewandowski; this one is very self-explanatory; there’s not much for me to explain if you have seen Robert Lewandowski play this season, there should be no doubt in this decision. Robert Lewandowski scored 41 goals in 29 games that broke Gerd Muller’s record that stood for 49 years; no one ever thought that his record would be broken. Robert Lewandowski threatened at that very idea this season. Even though he missed about four weeks with injury, he still chased down history. He scored a hat-trick with three games left, a penalty with two games left, and with the last kick of the match against Augsburg, he scored in the 89th minute to break the record as he tributed the Bayern Munich Legend. He finished the season first in goals, obviously with 41; honestly, if he had not been injured, he could have gotten close to 45 but still ended up the record despite the weeks he missed. He also ranked first in big Chances with 88, first with shots on target with 68, first in expected goals with 34, meaning he scored seven more goals. He was expected to, which is incredible in its own right. In addition to all that he did Supply, 32-key passes, finishing the season with 41 goals and nine assists in the Bundesliga, and that’s not counting all he did in the Champions League just showing it was a season of immortality I don’t even really need to argue or make an argument for him the numbers, and the eye test does that for me. The best player in the League and the world this season; he put together a Bundesliga season that most of us will never forget. There was only going to be one when it comes to the central Striker in the team of the season. 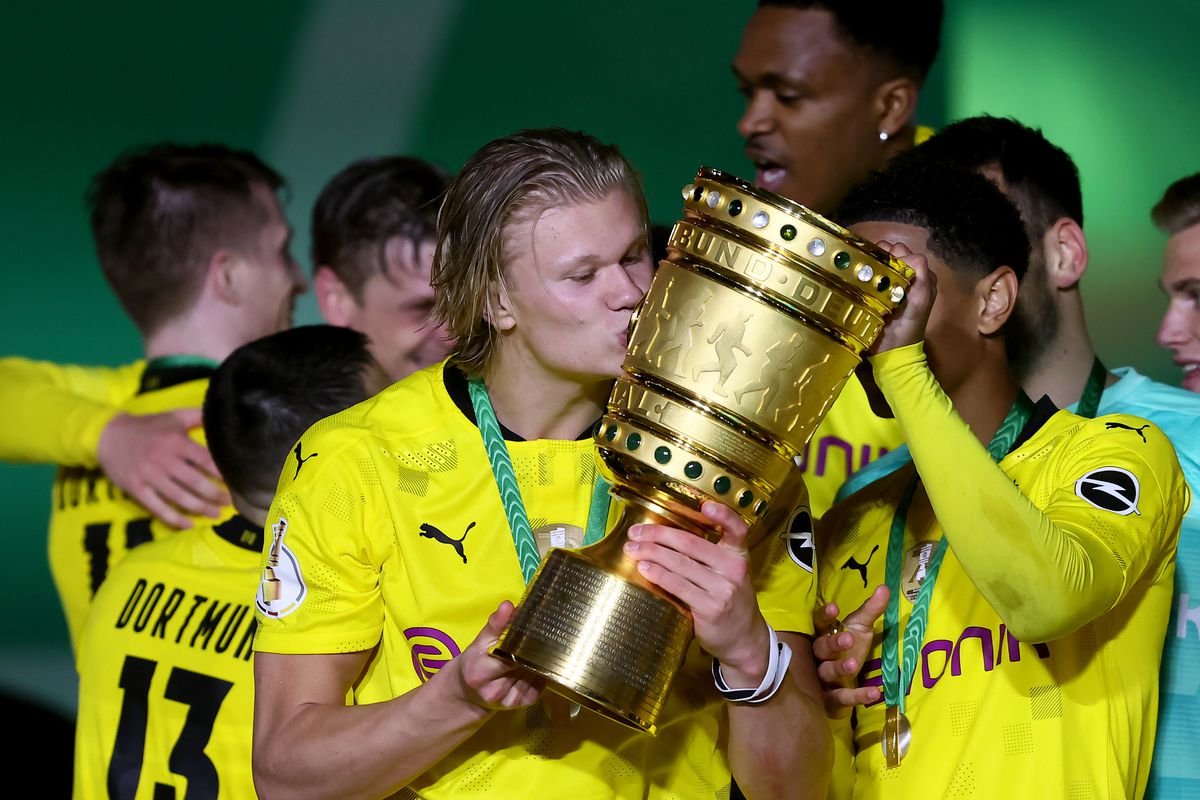 Full disclosure had erling Haaland not made the Champions League this season; he would not have made the starting 11 of my team of the season in a tough decision he would have made the bench. However, even though I think Marco Reus was the most influential in the turnaround, Dortmund had erling Haaland has supplied goal after goal after goal. In all competitions this season, he has 41 goals in 41 games; the last person to do that at his age was the one and only R9 Ronaldo. His overall performance this season has been close to perfect. Erling Haaland is the best young talent in World football, a striker that none of us have ever seen before. He is a scoring machine that can score whenever and wherever he has been such an important part of this Bundesliga season, especially for Dortmund. He is saved his team from some embarrassing moments throughout the season. He is going to score 40 goals this season for a decade; he will put up numbers that will look ridiculous and may even be able to get in the bracket are Ronaldo and Messi in terms of numbers; he will never reach that level, but from a statistical standpoint it is possible that he could. He can score goals in any way; this has made him such an outstanding talent in World football and has been a treat to the Bundesliga. He was one of the key contributors in Dortmund winning their first trophy in four years winning the German cup and scored and Supplied goals over the last couple of games to ultimately put themselves in the Champions League once again the performance against Wolfsburg was the most defining of the season Wolfsburg outplayed Dortmund but Haaland scored twice being a big difference, and that’s the moment in which Dortmund closed in on that final Champions League spot. Erling Haaland scores 27 goals while supplying five assists. He was the number three goal scorer in the League behind Robert Lewandowski and Andre Silva. He ranked number three big chances number to expected goals and number three and shots on target; his first entire Bundesliga season was insane; the standard of the strikers we have had this year has made his season, particularly look less impressive than it would already have been. Considering the numbers I just laid out, that’s pretty phenomenal in any season; he was the third best Striker in the League this year, but he would have been top just shows the talent of the league in almost any other season striker position we have in the Bundesliga. Erling Haaland will continue to rip this league part; his goal-to-game ratio is almost identical and this season he was a walking goal; every time he touched the ball, there was always a chance. Erling Haaland was on a mission, and for the final seven games of the campaign, he was in some way involved in the goalscoring department and at least provided them with what they needed; it was a fight to the end, and erling Haaland was a big part of that as he rightfully earned his place in the team of the season.