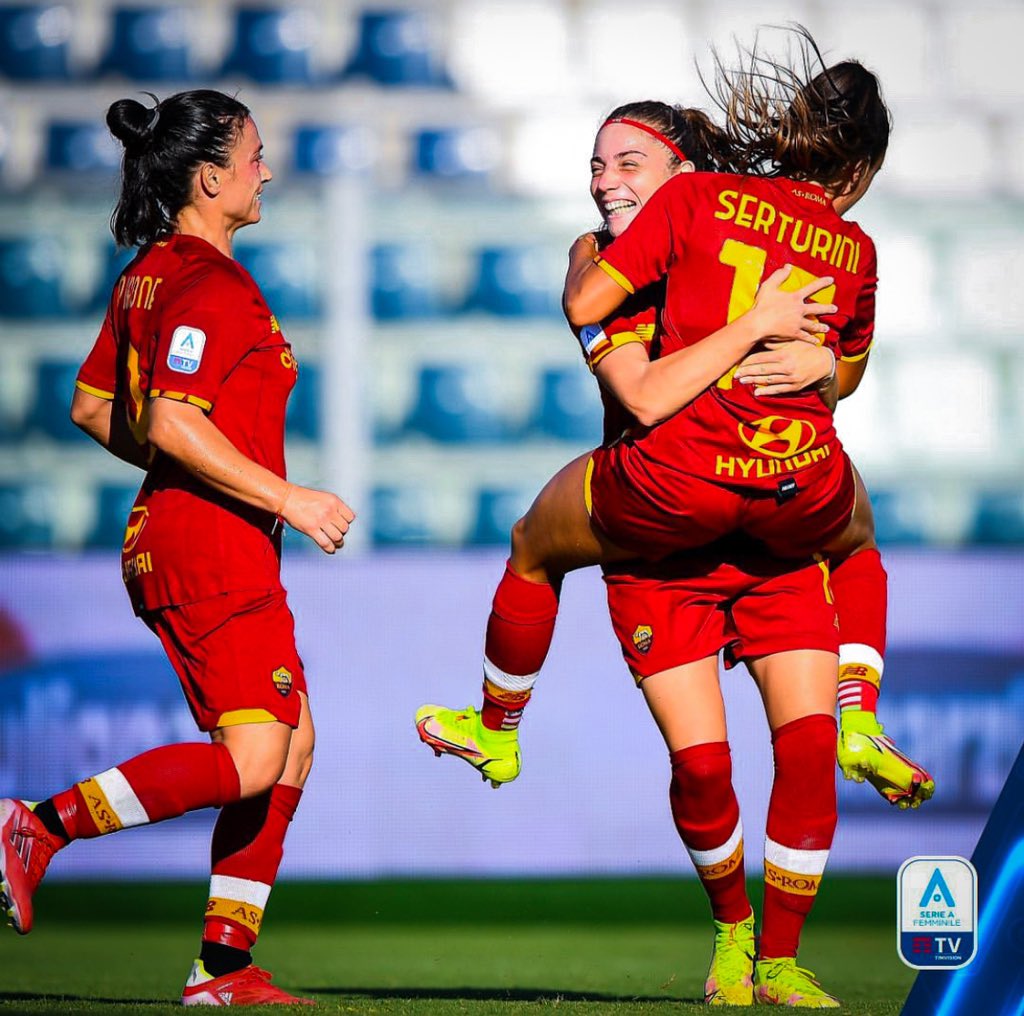 The Roma women opened up their campaign for the new season last Saturday. There is a sense of optimism that Roma can go a step further than they did last season when they won the Coppa Italia domestically there was slight disappointment between the girls as they finished fifth in the week however they take the first trophy ever won by the club when they beat AC Milan on penalties in the Coppa Italia final this season would going to be an actual test mentally and physically to see if Roma can make that extra step and push forward as one of the best teams in the league. Last year, despite the circumstances, they were an underachieving Bunch; despite being one of the most talented teams in the league, they couldn’t put it together consistently; this season, they hope it is a brand new challenge. A new coach and many new additions should give Roma some confidence to have a fantastic season. In the campaign’s opening game, they took on an Empoli as Roma’s new coach Spagna got a reunion against his former side. Roma also signed two players in the summer who played for them last season with many familiar faces. Roma looks sharp throughout the match as they put continuous pressure on the opposition away from home to start the new campaign, but they are self-confident and comfortable. It was just a string of Misfortune from Empoli Anna Maria on a counter-attack pushes forward as an own goal is put in the back of the net as Roma they took the lead into the second half Empoli we’re out of depth taking a big deflection on Glionna registered as another own goal. Then a cross hit into the box ended up in the back of the net again; as crazy as it sounds, Empoli scored three own goals they did put pressure on Romo at times. Still, it was a very one-sided affair despite having a few chances at the end after Roma had a sending-off the Roma women start a new campaign with a big three points away from home against a good team as they go to Empoli getting a clean sheet and a 3-0 victory. 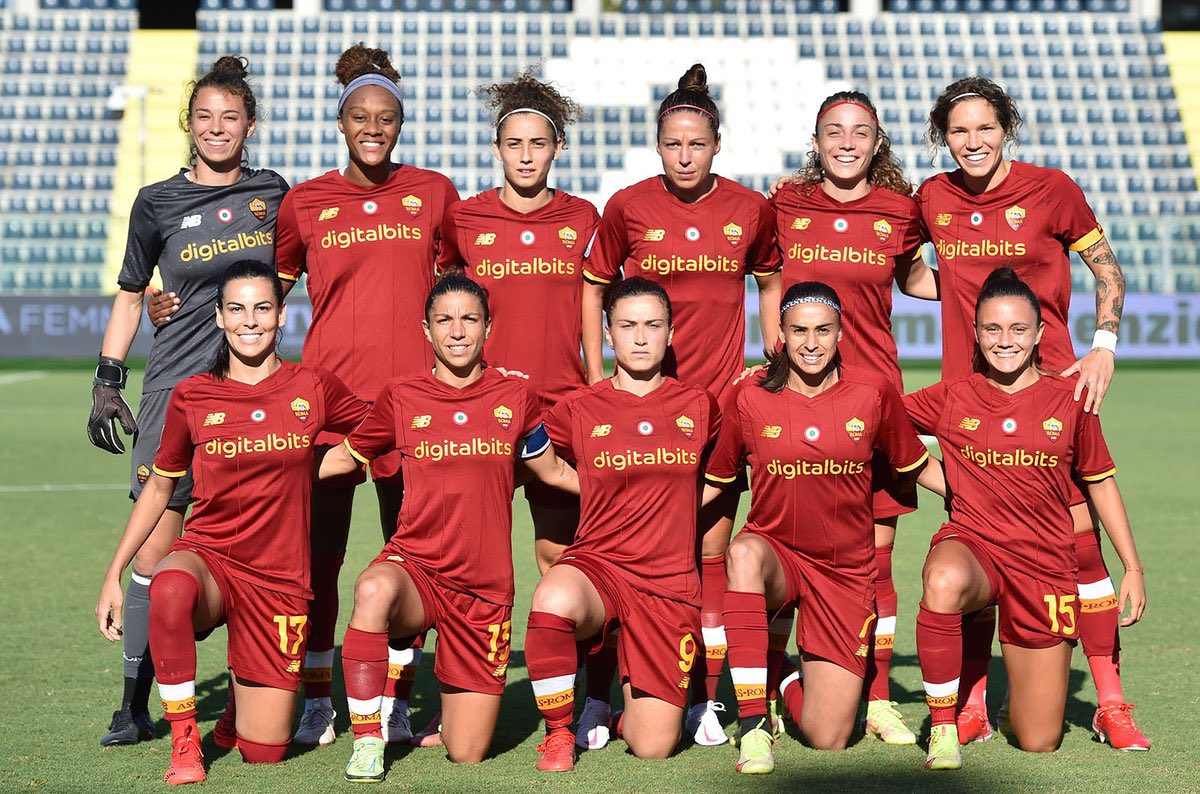 The Roma women are also shooting out of the 4-2-3-1 setup. In goal would be the Romanian Camellia Caesar before center-backs would consist of Soffia, Swaby, Elena Linari, and Bartoli. The defensive Midfield pair would be the duo of Vanessa Bernauer and the new signing from Real Madrid veteran midfielder Thaisa. In central Midfield would be Andressa Alves to her left would be new signing from Juventus Bernadetta Glionna on the opposite side would be Roma’s best player and one of the best in Europe Anna Serturini then upfront as Roma Central Striker would be Pirone new signing from sassuolo. 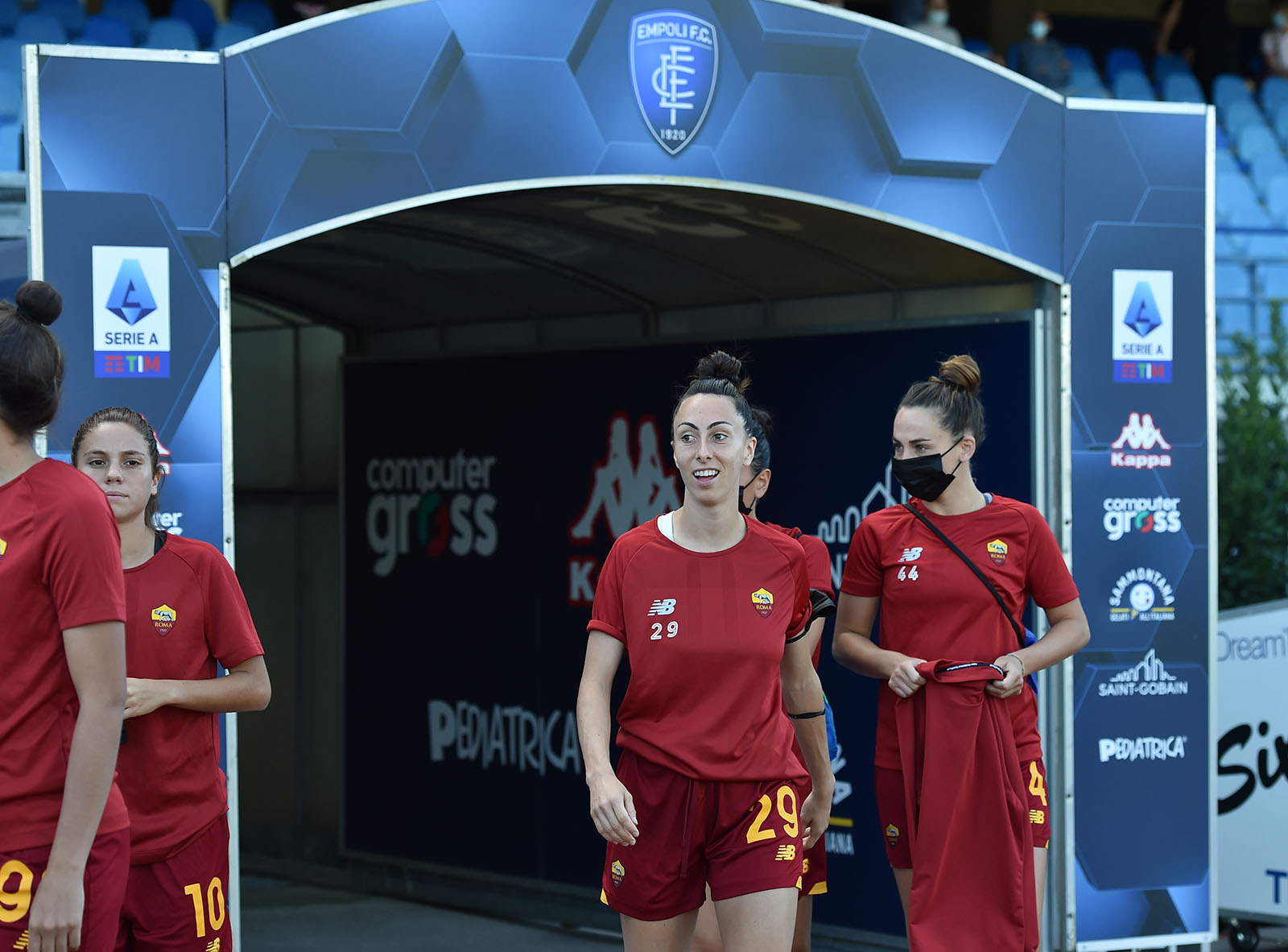 The match kicked off in Empoli to start the new season. Roma seems to have control early as they nearly scored in an opening couple of minutes. On a counter-attack, multiple Roma players push but are unable to have the finishing touch to put themselves in front. Roma had the advantage in possession as they had a lot of the ball. This was only going to help them grab early momentum; the game went as expected as Roma often pushed the hosts back with their hybrid of attacking options at Roma this season. Before not too long, Roma got themselves in front of a beautiful run from Anna Maria in the 21st minute put Empoli under duress; she cut forward using her pace and control before a mishap by the defense as the ball rolled in the back of their own net despite the defensive efforts to try to get the ball out but ultimately across the line as Roma took a 1-0 lead. Appalling display of defense, eventually leading to the first goal. Eight minutes later, in the 29th minute, Roma had an opportunity to double. Coming very close with Anna once again being the one to put the pressure on, she could not get that goal but continued to be a threat all game long. There weren’t that many significant chances in the first half Empoli occasionally came forward attempting to get into the box, but defensively, Roma was handling them quite simply. After the opening 45 minutes, the own goal was the difference as Roma held a 1-0 lead. 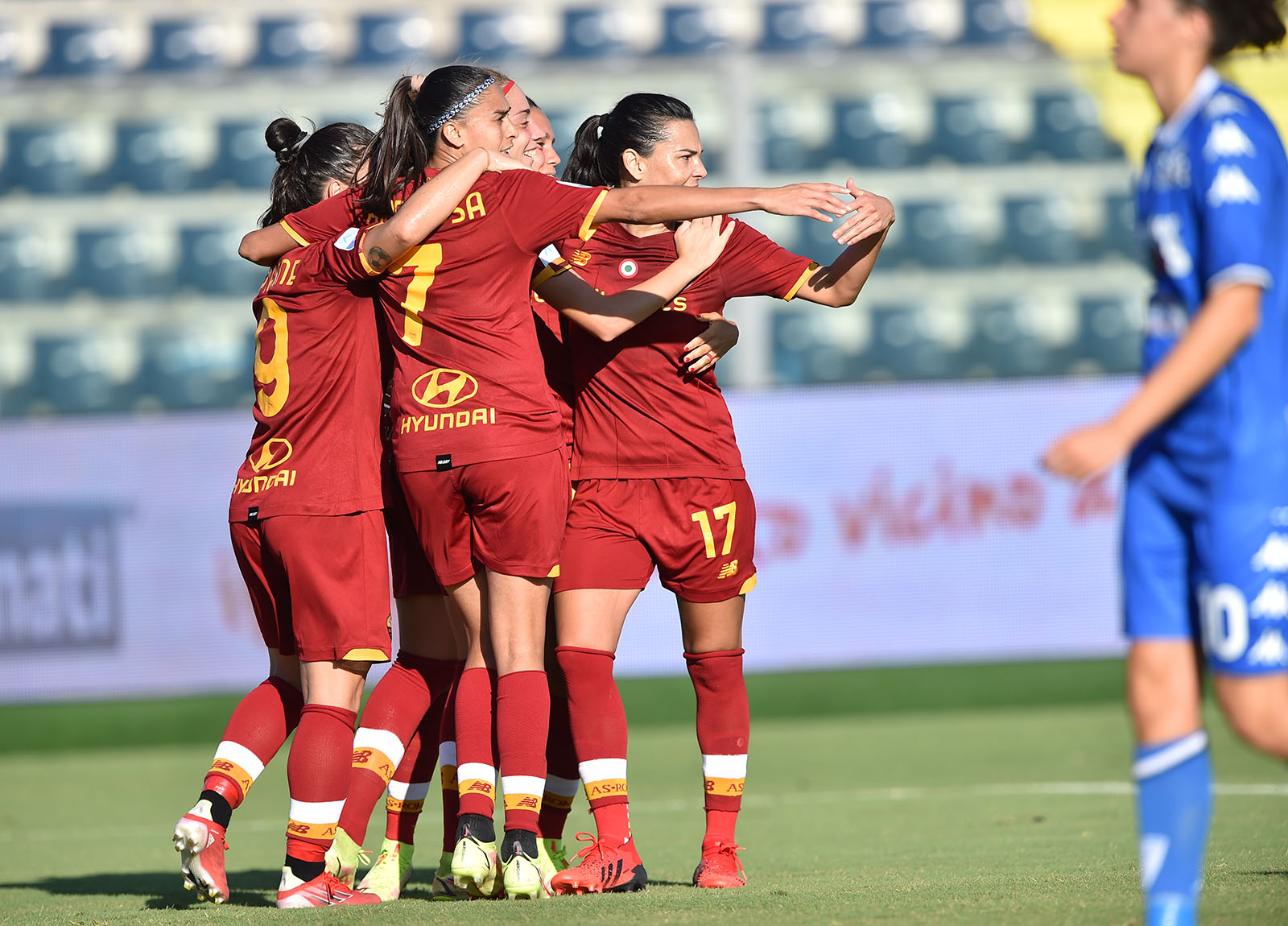 In the second half, it was more of the same as a Roma attempted to turn the heat up with the attacking options that Roma has this season; there’s no reason why they should not be in a title race this campaign. There is much more action from the Roman women in the second half as they are trying to grab that superiority in the game. Glionna was inches away from a second goal. Right at the edge of the box had a potent and accurate strike as she looked for the bottom corner less than an inch away from another goal, but the ball went out of play after missing by inches. Three minutes later, Aroma came forward again and once again came so close for another goal. Allison Swaby was right; thereafter, the defense was able to deal with the situation before things could worsen. Glionna force Roma into a 2-0 lead in the 56th minute down the wing; she tried to hit a curler into the top corner but took a deflection but still found the back of the net as Roma took a 2-0 lead. Once again, it was an own goal; despite the Brilliance of the strike and the Run, a huge deflection gave the goalkeeper no chance of saving it. Less than 10 minutes later, she came forward again with a powerful running shot at the goalkeeper; she managed to make a safe Lazaro try to get a late touch, but the defense cleared it out. Only to land at the feet of Glionna, who sent a cross into the box once again; an error by the defense leads to another goal as it would be a third own goal for Empoli. Roma now had a 3-0 lead Romans new signing forcing two of them. In the closing stretch of the game, Empoli attempted to put pressure on Roma. Elena Linari took out a beautiful run outside the box; the Roma Defender was sent off with a red card. Empoli can take a brilliant free-kick just over the goal. On three different occasions, Empoli attempted to beat Camellia Caesar in goal; she was not asked to do a whole lot, but late in the game, she made three very impressive saves to keep the clean sheet in the end. Roma hold on for a 3-0 victory to kick off the new season despite the own goal Fiasco Roma put themselves in position almost regularly. The woman of the match goes to Glionna with a brilliant performance against her former team, forcing two own goals; Roma starts the new season with a massive three points incredibly sharp while doing it. 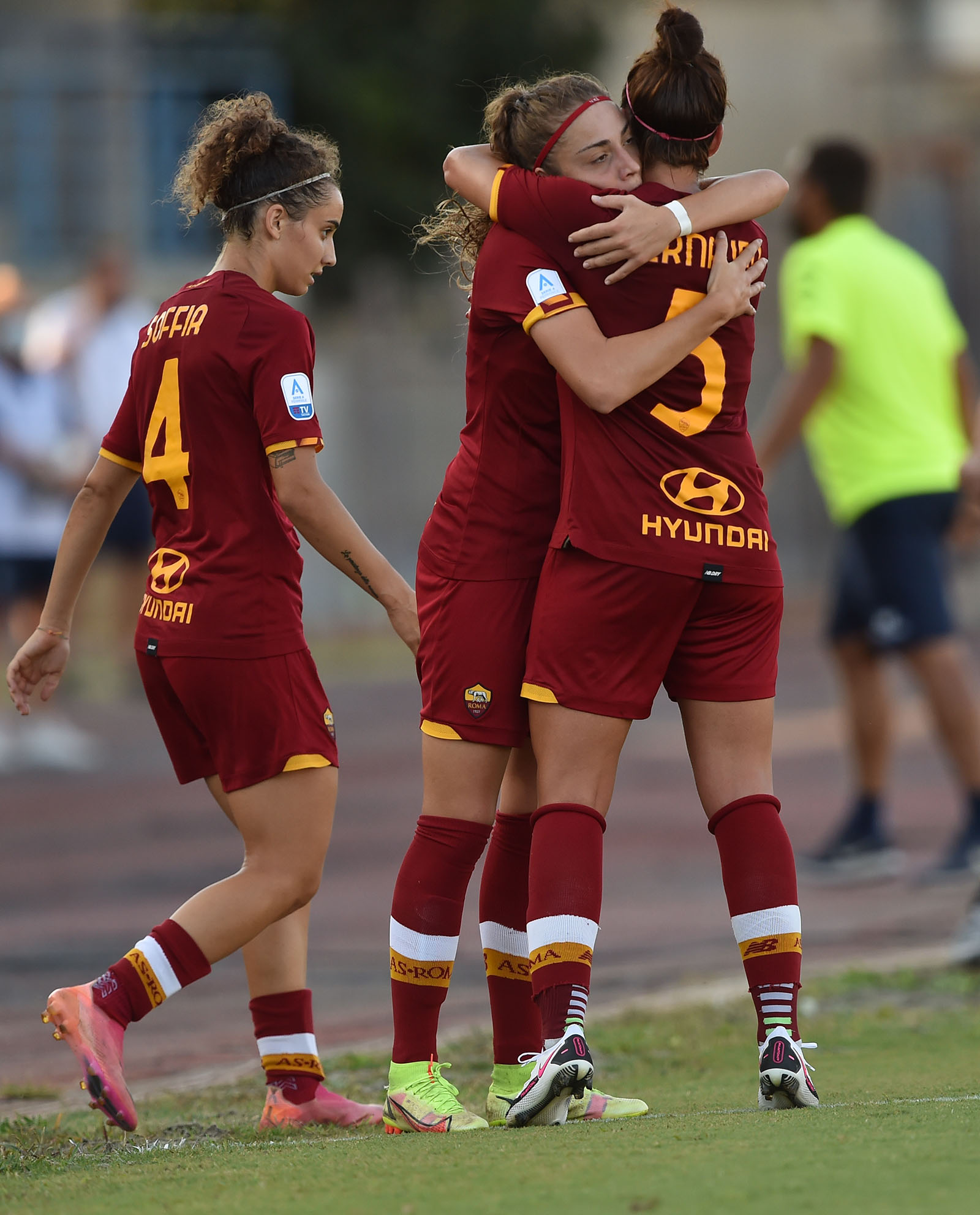